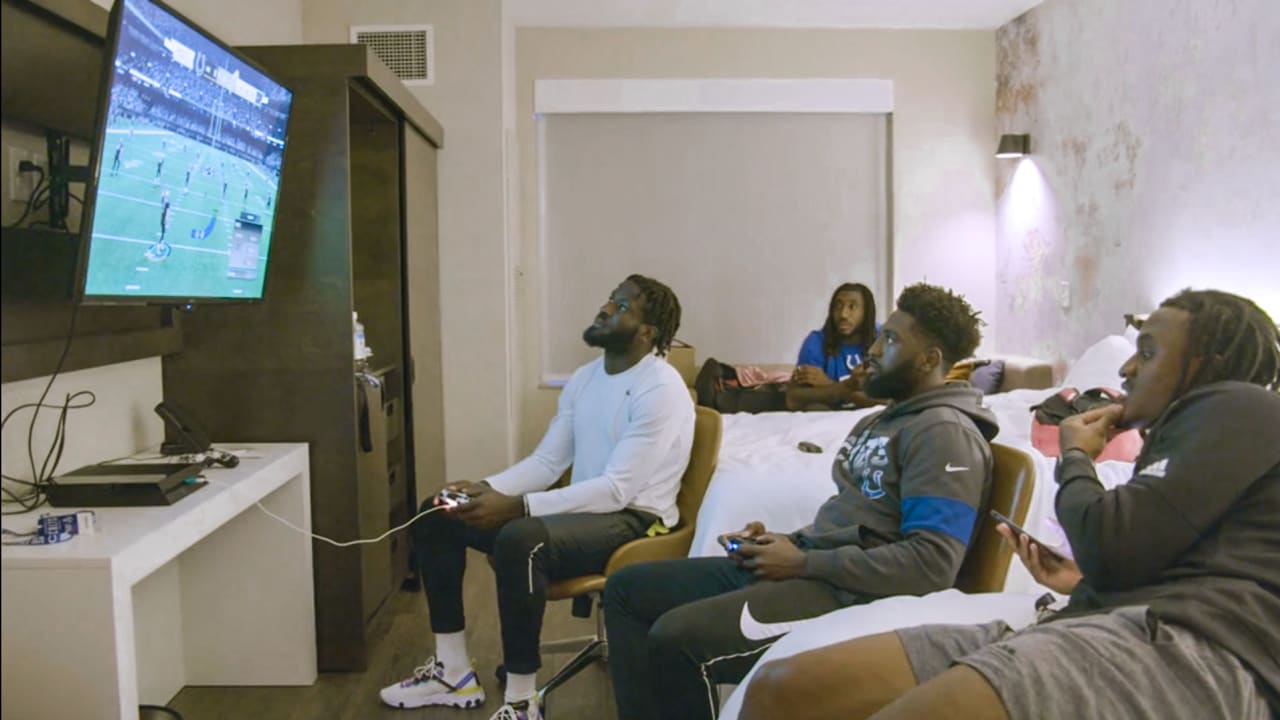 » After focusing on the offense (mostly wide receivers and tight ends) in Episode 2, Episode 3 focuses on the defense. You get a good early look at second-round pick Rock Ya-Sin and the Colts’ cornerbacks and fifth-round pick E.J. Speed and the Colts’ linebackers.

» This episode mostly focuses on the training camp practices just before the team’s first preseason game against the Buffalo Bills, the Bills game and then the days leading up to the Colts’ joint practices with the Cleveland Browns at Grand Park Sports Campus in Westfield, Ind.

» Tight end Mo Alie-Cox describes training camp perfectly early on in the episode: “Hitting. Hitting. Hitting. … Go to sleep. Wake up. Go hit again. We kinda know what the defense is doing; defensive knows what we’re doing. So very eager to see somebody in a different jersey and just go hit somebody else, and in a game setting. You just want to see all the hard work that we’ve put in so far translate into a game setting and see what we can do.”

» Speed, who played college ball at Tarleton State, a Division II school in Texas, explained the feelings heading into his very first NFL game against the Bills: “I think that preseason game is really going to shock and hit me like, ‘Dude, you’re in the NFL,” he said. “Like, I just want to be there; I just want to be there in that huddle coming out of the tunnel into an NFL game … putting on the NFL uniform, that means a lot. I’m just humble and I’m ready to play.”

» You’re also introduced to fiery secondary/cornerbacks coach Jonathan Gannon, who describes why Ya-Sin has fit in so well so early. “If a guy doesn’t fit what the unit looks like, he’s kind of an outcast,” Gannon said. “Rock fits in from the standpoint of preparation, he plays hard, he’s ultra competitive, he’s smart, he asks questions, he’s engaged. Players see that and they like that, because they know he wants to get better and learn everyday, and that promotes growth.”

» You get a prime example of what Gannon is describing in the Bills game, as you listen in on some chatter between Ya-Sin and fellow cornerbacks Nate Hairston and Pierre Desir where the rookie is talking through some coverage and tackling techniques.

» Speed, meanwhile, hasn’t been shy about running around and making plays in camp and in the preseason, and he’s definitely got the attention of his coaches and teammates. “E.J. Speed is working really hard,” defensive coordinator Matt Eberflus said. “He has a maturity level about him in terms of taking the coaching and wanting to get better every single day. He’s got great talent, and sky’s the limit for him.”

» Darius Leonard, who earned First-Team All-Pro honors and led the NFL in tackles as a rookie last year, sees a lot of himself in Speed. “He’s tall, lanky, he’s very fast and he’s very physical, and he reminds me of myself, the way we play with our hands and everything,” Leonard said. “He’s like a split image of me, especially the way I was last year knowing the playbook and how I was trying to get a grasp of it, and now he’s the same exact way, the way he runs to the ball. So I definitely see everything that I’m doing inside of him.”

» If you’re a Colts fan, you probably already saw Ya-Sin’s terrific interception in coverage against Devin Funchess, but enjoy the play once again from more angles (and also another angle of Gannon bear hugging general manager Chris Ballard as Ya-Sin sprints towards the end zone).

» Speaking of Gannon, cornerback Kenny Moore II describes what makes him so effective as a coach: “Coach Gannon is probably the smartest coach I’ve ever been around,” Moore II said. “He makes practice so uncomfortable for you. He’s talking to you throughout walkthrough, throughout practice, throughout individual. He’s like a bug in your ear.”

» There’s a method to that madness, Gannon explains: “You know, my job Monday through Saturday is put stress on ‘em; Sunday hopefully they don’t have as much stress. So they know I’m high energy, and I want high energy out of them. So if I don’t feel like the juice level, so to speak, is where it needs to be, I tell them about it.”

» We get a good reminder from Leonard about where he earned his nickname “The Maniac.” Rookie wide receiver Parris Campbell asks that question during a practice. “After my junior year playing against Clemson I had like 19 tackles, and I forget who it was, said, ‘You played like a straight maniac.’ When he said it, it kind of stuck from there.’ “That —-’s hard, I feel,” Campbell says. “Man, it’s a pretty cool name. You’ve just gotta live it up, you know what I’m saying?” Leonard said. “With a name like that, you can’t come out here and get like five or six tackles a game. You’ve gotta have at least 12 or more a game.”

» You also get a good look into MIKE linebacker Anthony Walker, who on the surface appears a little less outgoing than Leonard, but we get a good look into their relationship rooming together at the camp hotel as he’s forced to watch wrestling. “It’s fake though,” Walker says. “I’m tired of you saying it’s fake,” Leonard responds. Hilarity ensues.

» But on the field, Walker is looked upon by the young linebackers as a leader. “Anthony Walker is a true professional,” Speed said. “I feel like he shows you how to be a professional the way he talks … just the way he carries himself, he leads the group with exceptional leadership and energy, and I feel that every day when we step on the field.”

» This episode also features a good look into how the players spend what little free time they have during camp together. Whether it’s Leonard and Walker watching wrestling, the team going to a movie or playing video games (Zach Pascal, using the Colts, torches Campbell and the New Orleans Saints with T.Y. Hilton in EA Sports’ Madden). Hilton, by the way, is the Colts’ self-proclaimed Fortnite master.