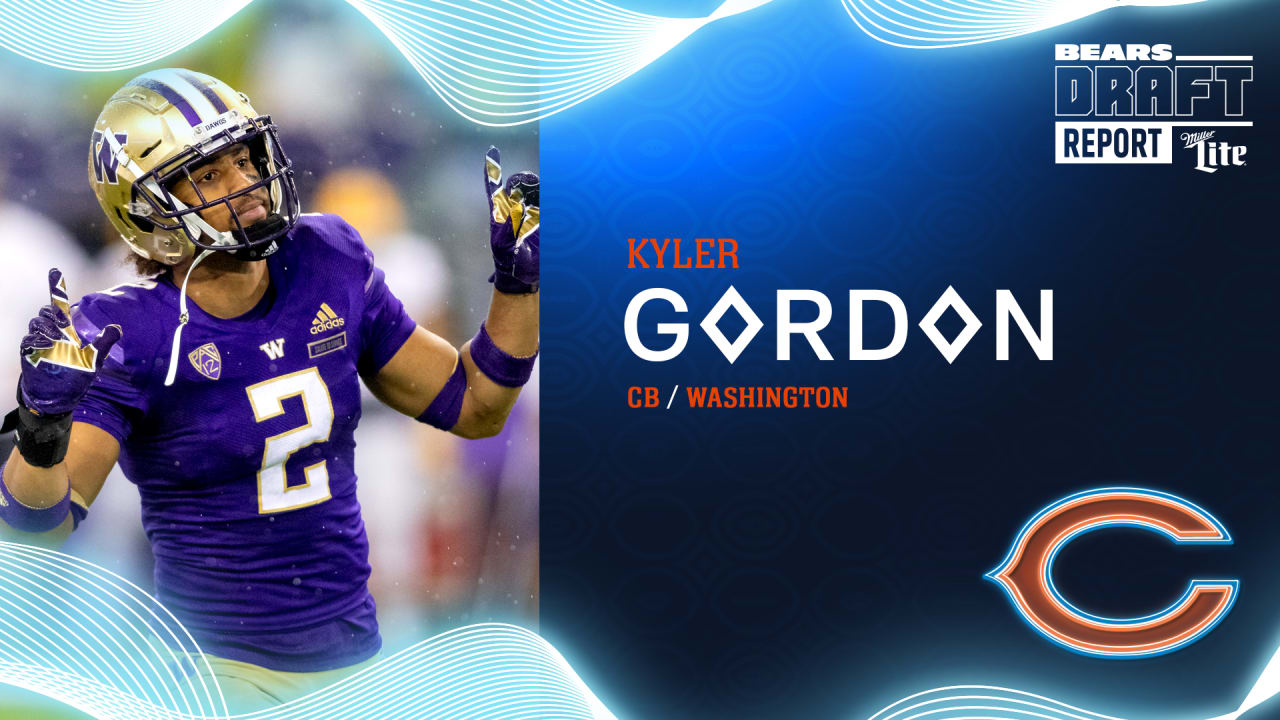 Bears area scout Francis St. Paul feels that one of Gordon’s greatest attributes as a player is his movement skills.

“He’s an elite mover,” St. Paul said. “His change of direction. His feet. Ball skills. Those are some of the stuff that stuck out.”

St. Paul lauded the 6-foot, 200-pounder for the competitiveness and toughness he displayed during a breakout 2021 campaign.

“This is a guy, when you speak with him, you’ll see he’s very calm,” St. Paul said. “Corners, you’ve got to forget about the last play, because you will get beat. And he’s one of the guys, that if he gets beat, it didn’t bother him at all and he came back and competed more on the next play.”

Here’s how NFL.com analyst Lance Zierlein describes Gordon: “Cornerback who comes with an elite, high-performance engine but a GPS still in the process of loading. Gordon’s dynamic athletic qualities will show up in testing, but more importantly, they are all over his tape. His blend of play strength and explosive burst affects the passing game from press, off-man and zone coverages. He plays with an alpha demeanor and hitting is definitely part of his overall package. Gordon lacks polish and needs to play with better route recognition and anticipation, but if those elements click, his ball production could be near the top of the league as one of the top playmakers in the game.”

Gordon said that he was “a little surprised” to be drafted by the Bears, but he was excited given the positive experience he had during a pre-draft visit to Halas Hall.

“When I got the call, honestly, I heard the name ‘Chicago’ and I’m thinking of all the people that I met on the visit,” Gordon said during a video call with the Chicago media. “Just knowing the good people that are there, I’m just thankful to be in a good environment and the relationships I’m about to build. These people are going to be amazing.”

Gordon didn’t hesitate when asked what he would bring to the Bears and their fans.

“I’m definitely going to bring a lot of energy,” he said. “I want you to know that when I come to Soldier Field and I’m there I just want it to be live and poppin’. I want to interact with y’all. I want to get turnt. I just want them to know I’m bringing the energy and I want them to match it.”

Gordon was a competitive dancer as a kid.

“My mom actually got me into that at a young age, so I did that for a while,” he said. “It was the first competitive anything I ever did. I would just go around the whole country just doing a bunch of competitions. I was competitive. Went to nationals. Did all that. The lyrical, ballet, hip hop, all that. She got me into that and that helped me transition to the game of football when I first finally got into that. So, I’m thankful I did that.”

Gordon said that dancing required a lot of consistency and dedication.

“Not only do you go there and do the practicing and all that,” he said, “but as far as going home and stretching and being that flexible and having that core strength and how strict a lot of teachers are in how they want you to perfect your craft and whatever choreography that may be, I just remember going through it. It’s tough. They just demand perfection. I got a little bit of that in me, too, just trying to do what I do and perfect my craft.”

Gordon is the second Pac-12 cornerback the Bears have selected in the second round in the last three drafts. In 2020, they chose Utah’s Jaylon Johnson at No. 50.

Tags: gordon he his