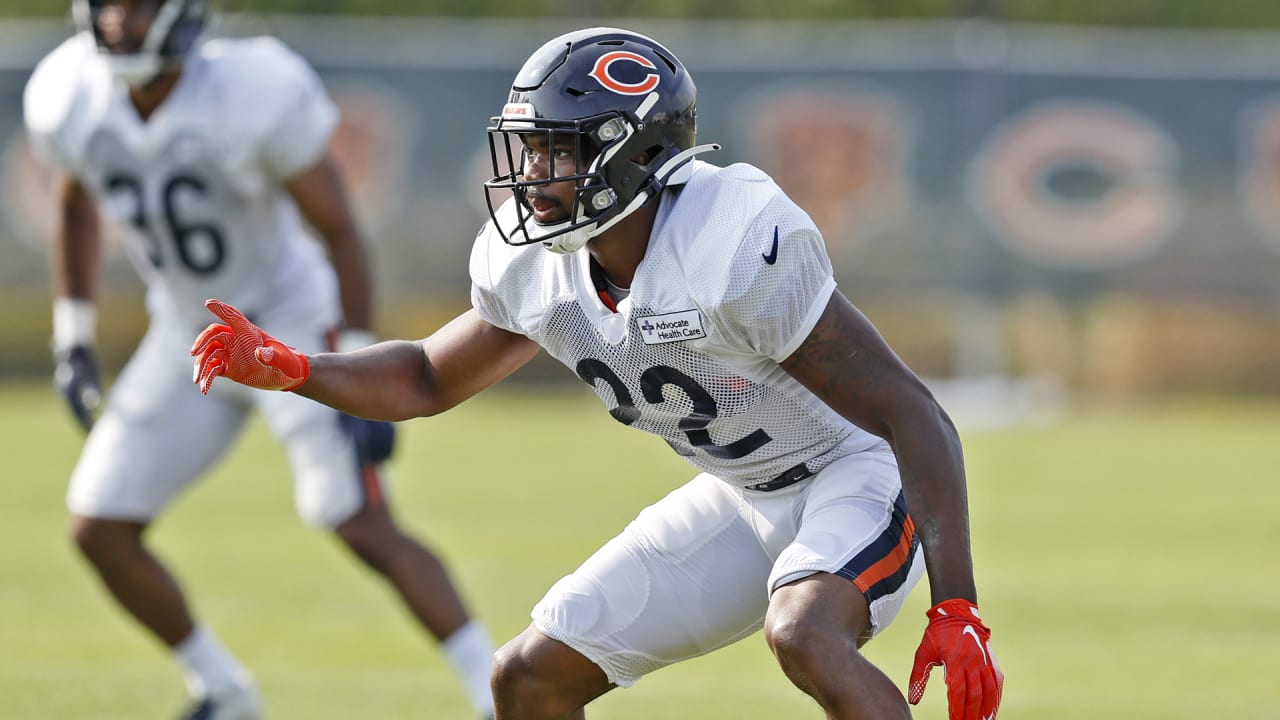 Coach Matt Nagy said Tuesday that he’s been most impressed with Vildor’s increased confidence level in training camp, saying: “He’s playing faster. Him and Jaylon on the outside right now are playing fast. It’s nice to have two young guys out there doing their thing. Probably more than anything from last year to this year I’ve seen [Vildor’s] confidence grow.”

(2) Activated off the reserve/COVID-19 list Monday, veteran ﻿Elijah Wilkinson﻿ is listed as the No. 1 left tackle and can win the job by performing well in training camp and the preseason.

The Bears are counting on Wilkinson, especially with the other top two contenders for the job—rookie draft picks ﻿Teven Jenkins﻿ (back) and ﻿Larry Borom﻿ (concussion)—sidelined with injuries.

“With numbers, getting him back is key, just because we were getting low there,” Nagy said. “Coming into this camp, he was the starting left tackle. He understands that it is a competition, so he’s probably champing at the bit right now to get out there and continue to compete. I know for us and he knows—and [offensive line coach] Juan [Castillo] has been clear with all of them like, ‘Listen, you guys come out here and you get a chance now and somebody’s got to take it,’ so [Wilkinson] is getting back and he’s ready.”

Wilkinson signed with the Bears in March after spending his first four NFL seasons with the Broncos from 2017-20, appearing in 45 games with 26 starts. The 6-6, 322-pounder started 19 games at right tackle and seven contests at right guard. But the Bears are confident that Wilkinson can play left tackle.

“He’s new, right? So, he’s learning techniques from Juan,” Nagy said. “But he’s willing, and I think that’s all you can say is if he’s willing to do it, just keep doing it. And again, you’re going up against some pretty good rush ends.”

(3) Rookie sixth-round pick ﻿Khalil Herbert﻿ is listed as the No. 1 kickoff returner and veteran free-agent acquisition ﻿Damiere Byrd﻿ is the top punt returner.

Last year at Virginia Tech, Herbert returned kickoffs on a regular basis for the first time in his college career, averaging 26.9 yards on 16 returns.

“Kick return is something I pride myself on and I know it can affect the game to start our drives and help the offense to get field position,” Herbert said in May. “I feel like I’ll be able to help the team out in that way.”

﻿Tarik Cohen﻿, the Bears’ primary punt returner since he joined the team in 2017, is not included on the depth chart because he’s on the physically unable to perform (PUP) list.

(4) Veteran ﻿Alec Ogletree﻿ is listed with the third defense at inside linebacker, but he could move up the depth chart if he continues to make impact plays.

After signing with the Bears last Wednesday, Ogletree intercepted six passes in his first four practices, an impressive feat for a defensive back, let alone a linebacker.

“He’s doing great,” Nagy said. “What a credit to him to come in here—we are down some numbers at inside linebacker—and all he is doing is making plays. You can’t ask for more than that.”

Three of Ogletree’s last four interceptions in regular-season games have come against the Bears, all as a member of the Giants. He picked off Chase Daniel twice in a 2018 game at MetLife Stadium, returning one for a touchdown, and then intercepted Mitchell Trubisky in a 2019 contest at Soldier Field.

“He’s somebody that over the years here since I’ve been in Chicago,” Nagy said, “you go back and look at the tape, he’s had a couple picks and he’s done some good stuff, so credit to him.”