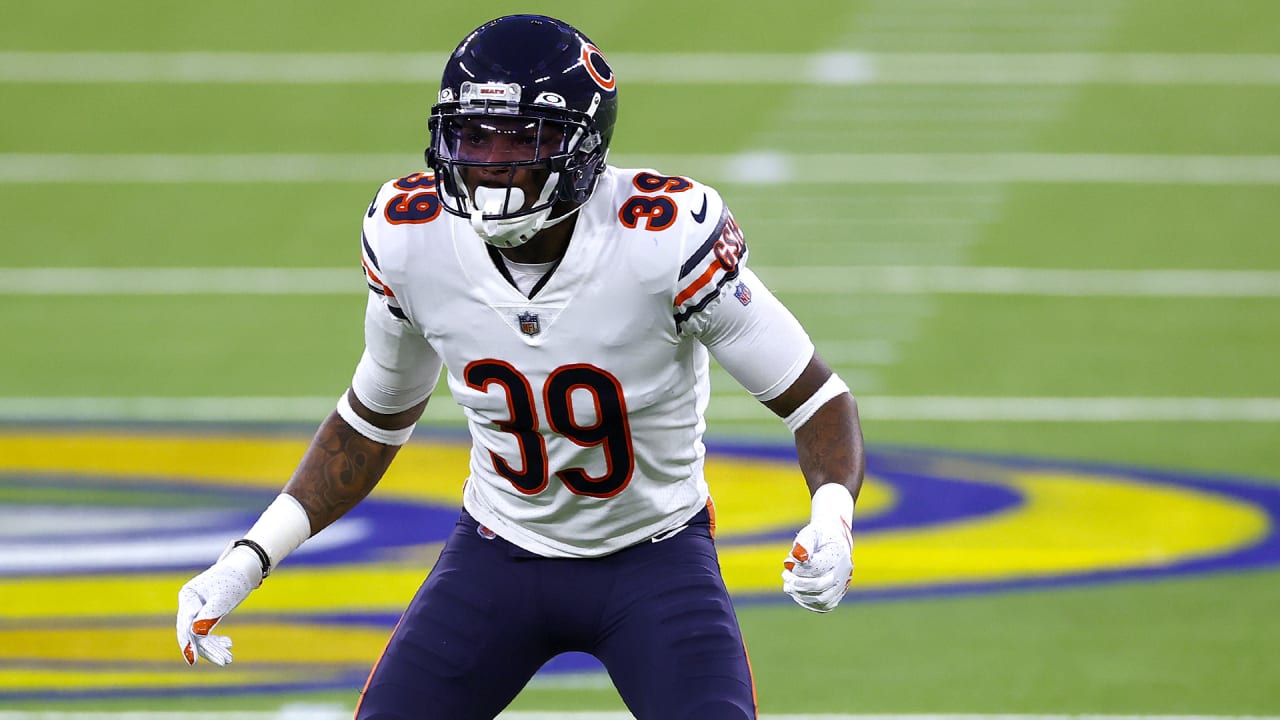 “That’s what good leaders do,” said Townsend, an NFL defensive back for 13 seasons with the Steelers (1998-2009) and Colts (2010). “It was real, it was from the heart and it was a message that wasn’t pointing fingers. It was a message talking to each of the players and himself.

In Townsend’s two seasons with the Bears, he’s seen Jackson grow as a player, person and leader. Selected to the Pro Bowl each of the past two seasons, Jackson scored his sixth career defensive touchdown on an 8-yard fumble recovery Oct. 26 against the Rams, tying Lance Briggs for third in franchise history behind Charles Tillman (9) and Mike Brown (7).

“What [Jackson] said is true,” Townsend said. “And he is that type of leader because he is one that shows up every week not only with his play but now with his words and allowing guys to follow him. The more that we get that from him, the better we’ll be as a group. That’s the type of person that we need back there from Eddie, and he’s growing into that type of leader.”

(2) Receivers coach Mike Furrey is impressed but not surprised with how Allen Robinson II has dealt with the offense’s lack of success this season.

The veteran receiver has continued to excel this year, ranking sixth in the NFL with 63 receptions and eighth with 755 yards on a struggling offense that’s 31st in the league in scoring and total yards.

“His professionalism—and, again, I’ve already said this before—is probably one of the best I’ve ever been around before as a player and as a coach,” said Furrey, an NFL receiver and defensive back for seven seasons with the Rams (2003-05), Lions (2006-08) and Browns (2009). “His demeanor towards the game, his focus towards the game, his preparation, is by far the best that I’ve ever seen.”

Robinson’s mentality has remained the same since he the day he signed with the Bears in 2018, one year after suffering a season-ending torn ACL in the 2017 opener when he played for the Jaguars.

“When you have a seven-year veteran that has been a Pro Bowler and who had double-digit TDs in his career and all that success that he’s had take notes in meetings,” Furrey said, “I always look over to check on him during installs and he’s writing stuff down and he’s fully engaged. And how he takes care of his body and so forth, I can go on and on about who he is, what he does and how he prepares. And that hasn’t changed from Day 1 that we got here and he was trying to prove everybody wrong in regards to overcoming his injury to what he’s doing right now and continuing to do with what’s going on.”

(3) Defensive line coach Jay Rodgers recently spoke with nose tackle Eddie Goldman, who opted out of the 2020 season due to COVID-19.

Selected by the Bears in the second round of the 2015 draft out of Florida State, Goldman has appeared in 67 games with 63 starts over five seasons. He has recorded 153 tackles, 12.5 sacks and 17 tackles-for-loss. Last year the 6-3, 318-pounder earned Pro Bowl alternate honors after registering 29 tackles, one sack and two tackles-for-loss.

“That’s the last time I really had any dialogue with him, but it was great, it was awesome. You guys know how it is when you drive down to the city. Some of y’all might live in the city, but when you’re driving from Halas Hall into the city, sometimes it can be a little bit longer than you want it to be. And it was a great conversation.”

In accordance with an agreement reached between the NFL and NFLPA, all players were given the opportunity to opt out of the 2020 season due to COVID-19, with their contracts tolling until 2021. As a result, the four-year extension that Goldman signed in 2018 now extends through 2023.

(4) Offensive line coach Juan Castillo lauded second-year pro Alex Bars for the passion he played with against the Vikings.

With Cody Whitehair and Sam Mustipher sidelined against the Titans Nov. 8, Bars started at center—a position he had never played in a college or NFL game. With Whitehair back in the lineup Monday night versus the Vikings, Bars slid over to his natural position, starting at left guard.

“The biggest thing that I can say about Alex is—and it’s a compliment—I know two guys in the last two places I have been that played with passion: Richie Incognito (with the Bills) and Marshal Yanda (Ravens),” Castillo said. “Alex is still young. What Alex did the other night is he played with passion. He played with heart.

“That’s hard, because you have to be in good shape to run to the ball, pick the ball-carrier up, do all those kinds of things. You saw him play with passion. Like I said, I’ve been around a couple guys that played like that. I was really proud of him. There’s still fundamental things that we have to correct and things like that, but he played with passion. He played with heart.”

Bars signed with the Bears in 2019 as an undrafted free agent from Notre Dame. He was projected as high as a second-day pick before tearing knee ligaments in the fifth game of his final season at Notre Dame. He appeared in five games as a rookie last year, but played only 12 snaps on offense and 18 on special teams.

Moving forward, injuries on the offensive line to starting left guard James Daniels and others could continue to give Bars more opportunities to play over the final six games of the season.

Eli Manning hopes to be more involved with New…