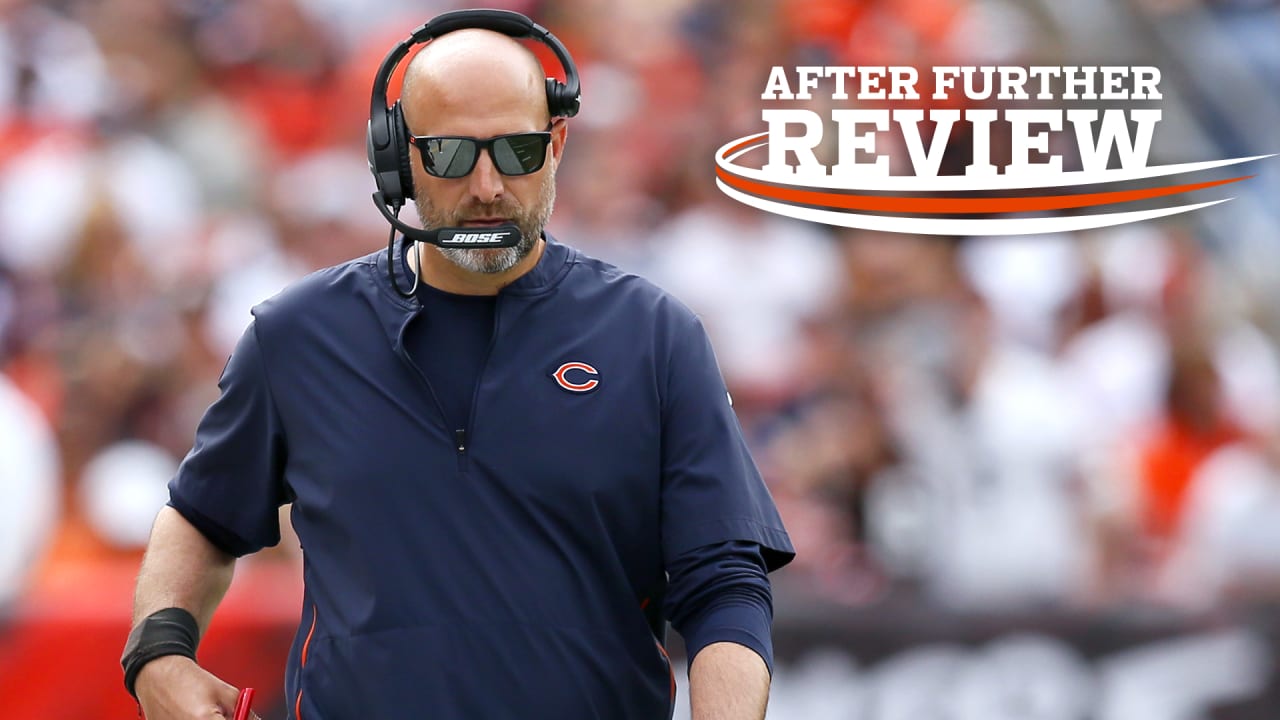 The 47 yards were the second fewest in a game in Bears history. The offense produced only six first downs, converted 1-of-11 third-down plays and allowed nine sacks, one shy of the franchise record.

“You get to a point yesterday where, statistically, when you look at that and you see what went on and what happened, we understand that we’re all very frustrated and angry,” Nagy said. “But it’s about solutions now and we’ve got to do it and that’s going to be my job as the head coach. I need to do that and it starts with me.”

Nagy promised that the evaluation of the offense will be a thorough one, saying: “When you don’t have the success … it keeps you up at night because you want to figure out why. So, we’re looking at everything right now.”

(2) Asked if he would consider relinquishing play-calling duties moving forward, Nagy said that “everything’s on the table.”

The Bears coach revealed that he would seek input from others about the offense in an attempt to regain “that vibe and that juice that we had in OTAs and then training camp.”

“The No. 1 thing is I’ll go to more than just one person and I go to people that I know are going to be honest in all parts of it, not just what they think that I want to hear, because I respect the honesty,” Nagy said. “Sometimes it’s not always in the building. It could be other places, too. But for a lot of times, it is those in the building because they’re in the trees, they’re in the woods with you when you’re going through all this.

“I always want to just make sure that if you keep it super simple, what is the best thing for the Bears to be successful? I’ll always keep it at that and leave it there; whatever needs to be done.”

(3) Quarterbacks ﻿Andy Dalton﻿, ﻿Justin Fields﻿ and ﻿Nick Foles﻿ are all under consideration to start Sunday’s home game against the Lions.

Making his first NFL start in place of the injured Dalton in Cleveland, Fields completed 6 of 20 passes for 68 yards, including just 1 of 8 for 10 yards in the fourth quarter.

Nagy said Monday that Dalton remains week-to-week with a knee injury he sustained in a Week 2 win over the Bengals, while Fields is day-to-day with a right hand injury he suffered late in Sunday’s loss. X-rays on Fields’ hand were negative, but the Bears will continue to monitor whether he experiences any swelling or other issues.

“[The injuries are] what we’re working through right now,” Nagy said, “so I can’t definitively say who the starter is [for Week 4].”

Asked if there’s a possibility Foles could start against the Lions, Nagy said: “They’re all three under consideration right now in regards to where they’re at, so we’ll just kind of have to see in the next couple days where they’re all at. We know where Nick’s at health-wise, but we just want to keep an eye on Justin and Andy. Then, for us to stay on that and make sure that we have a plan for any of those.”

(4) While the offensive line is taking a lot of heat for the nine sacks the Bears allowed, poor pass protection was only one factor.

“For a young quarterback having his first start, there’s going to be looks that defensive coordinators present … they might disguise some things. We knew that going into it. Justin knows that. But now you’ve got to do it real, right? Going through it. Some of those, as we go through the tape, you’ll see that.

“There will be other times when there was nothing he could do—they just made a play or we had an error. That’s the coachable part of it, that’s the side where our coaches upstairs right now are going through it. We’ll break it down with them and try to fix it.

“And then there’s other times, too, where it was a bad play call. The right play call was not made, and they made a good play on defense with their coverage and no one’s open.

“But now all that said, for the sacks that he had, what I was probably proud of the most from Justin was the way he handled all of that, because it’s easy to get frustrated and all of a sudden be taken out of the game. Not one time did he ever get frustrated or angry or upset on the sideline. He’s tough, mentally and physically.”

Tags: nagy re what