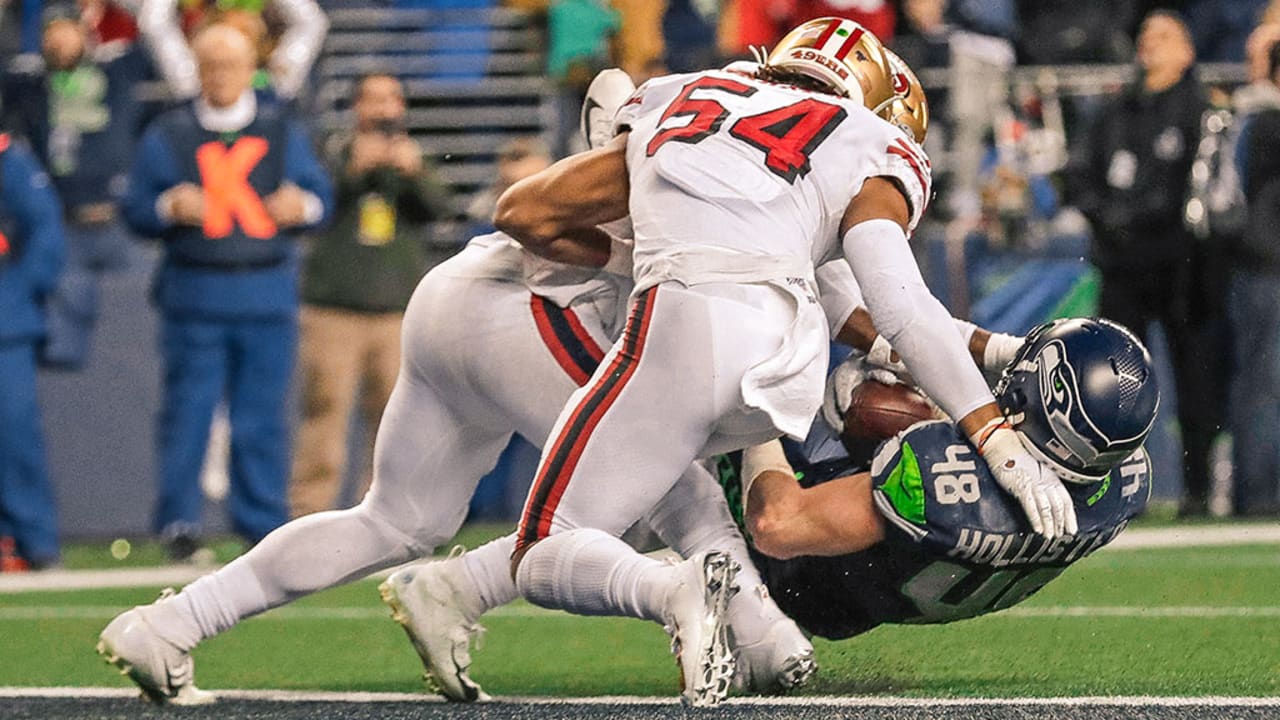 “The 49ers have played many games that have come right down to the final seconds, and none was more stressful than that Week 17 thriller at Seattle. Now that they have the No. 1 seed secured, this is the obvious favorite in the NFC.”

“If the 49ers end up hoisting the Lombardi Trophy in five weeks, remember the tackle rookie linebacker Dre Greenlaw made in the regular-season finale against the Seahawks. Greenlaw de-cleated Seahawks tight end Jacob Hollister at the goal line, denying Seattle the go-ahead score in the final seconds and ensuring the 49ers would enter January as the NFC West champions with home-field advantage throughout the conference playoffs. The Niners are a better team than the Seahawks, and they showed it for most of Sunday night’s epic season-closing showdown. But had Russell Wilson worked his magic and stolen the game? Who knows if the Niners recover? If they did, it would’ve been on the road this weekend in Philadelphia. Instead, it’s a bye week, a home game (or two) and the inside track on a Super Bowl return. Yup, remember that name. Dre Greenlaw.”

“Give us a minute, we’re just over here patting ourselves on the back for making the 49ers the biggest riser in our preseason rankings (from No. 30 at the end of 2018 to No. 19 in July). But clearly we underestimated just how high the Niners would soar this year. They peaked at No. 1 in our rankings in Week 8, but the most important ranking for San Francisco now is that they’re the No. 1 seed in the NFC.”

“Two things can be said about the San Francisco 49ers after a 13-win regular season. The first is that after they downed the Seahawks in Seattle during the final game of the 2019 regular season, the Niners are the No. 1 seed in the NFC playoffs. The road to Miami travels through Levi’s® Stadium. The second is that as they head into the postseason, the 49ers are battle-tested. They played the Seahawks, Baltimore Ravens and New Orleans Saints on the road during the second half of the year, winning two of three. The Seahawks and Green Bay Packers visited Santa Clara in 2019, and only the former notched a win. In other words, the NFC’s heavyweights have already been introduced.

“It’s hard not to view the Niners as the favorites in the NFC after they locked up home-field. The 49ers are stacked with talent on both sides of the ball and have shown they’re a tough out at the Field of Jeans. With an extra week to get players like edge rusher Dee Ford healthy, the Niners are well-positioned to represent the conference in Miami.”

“They held on for dear life in Seattle to win the division. But if the offense plays like it did in that game, they can easily win it all.”