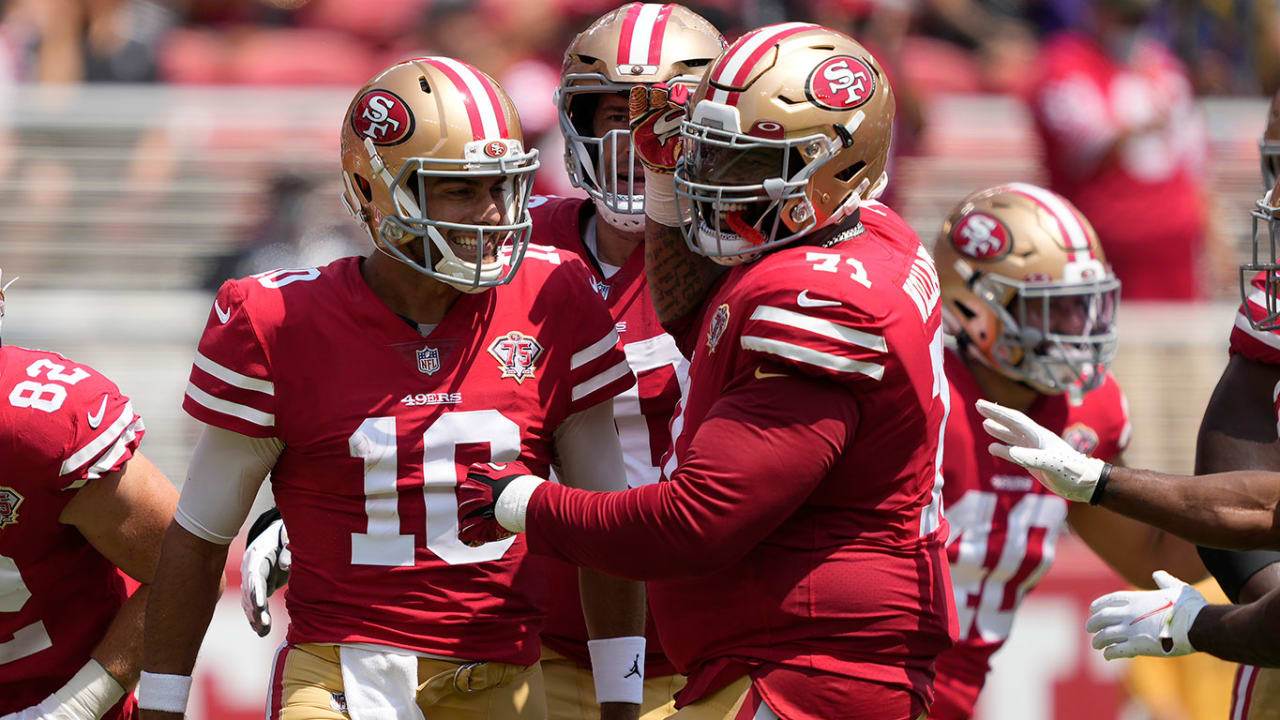 With the NFL calendar expanding to a now 18-week format, the new-look season can certainly take a toll on a number of players’ bodies, not to mention availability.

Just look at San Francisco’s roster in 2020 – by the third week of the season, the team had already lost a handful of starters due to injury, some for the year. Over the season, the team sat atop of the league with the number of players on Injured Reserve, including Nick Bosa﻿, George Kittle﻿, Deebo Samuel﻿, Raheem Mostert and Jimmy Garoppolo among a number of other players.

Couple the standard (or in the 49ers case unprecedented) number of injuries along with the effects of the COVID-19 pandemic, causing players and close contacts to miss time playing, the extended NFL season has drastically affected roster depth over the last two seasons.

However, San Francisco appears to have dodged a few bullets heading into their second postseason appearance in the last three years. Entering into Sunday’s Wild Card matchup against the Dallas Cowboys, the 49ers are (relatively) as healthy across the roster as they’ve been all season.

Notably, there were a number of question marks surrounding how Garoppolo would escape the team’s physical matchup while dealing with a Grade 3 thumb sprain. Despite the adrenaline from the game, Shanahan acknowledged Garoppolo made it out of the contest “in good shape” and avoided any additional damage in the overtime victory.

It’s likely Garoppolo and the entire 49ers team will benefit with the return of several players heading into the postseason. San Francisco was without arguably one of their best players in the critical match in Trent Williams﻿. The left tackle suffered an elbow injury in the Week 17 win over the Houston Texans that held him out of the entire week of practice. With the hopes of recovering in time for Sunday’s divisional tilt, Williams was sidelined for San Francisco’s most critical point of the season.

“It seemed real close, because he took it all the way as far as he could, but there was no chance of going once he did that,” Shanahan revealed. “He wasn’t going to be in good enough shape to protect himself or the quarterback in the game. So, I know it was tough on him, but I think he was as excited as anyone after we won because he is going to do everything he can and I think he just needs seven more days.”

Seven days would give Pro Football Focus’ highest-graded player in the site’s existence the opportunity to dress in his first postseason appearance since 2015 with the Washington Football Team.

But in addition to Williams, the 49ers are likely to see the return of several players who are either returning from Injured Reserve or have missed time due to injury.

Last week, the team opened the practice window for veterans Mohamed Sanu Sr. and Tavon Wilson in addition to Emmanuel Moseley﻿, who was activated from IR and made a crucial interception off of Matthew Stafford. Sanu Sr. and Wilson are candidates who could provide added depth against the Cowboys should they be activated ahead of Sunday.

Additionally, the team is eager to see the potential returns of running back/special teamer Trenton Cannon (concussion) and potentially linebackers Azeez Al-Shaair (knee) and Marcell Harris (Achilles) in advance of the Wild Card showdown. Nickel corner K’Waun Williams (unspecified) is another key defensive player who the 49ers are expecting to see on Sunday.

“Just from the game, all those guys that we mentioned, they’re some big guys,” Shanahan said. “But just having the chance to get all those guys back this week and being able to add a few guys there last week, especially with Dre Greenlaw﻿, was huge. Hopefully we’ll get the guys that missed with Trenton back and maybe Azeez, maybe Marcell. But yeah, I feel pretty good at this point, compared to earlier in the year.”

The 49ers are set to return to the SAP Performance Facility on Wednesday to begin preparations for Sunday’s rivalry-fueled matchup followed by a full practice on Thursday and a half-speed practice on Friday before departing to Dallas that afternoon.

The game is set for 1:30 p.m. PT on Sunday, January 16 on CBS. The matchup will also be available on Paramount+, Nickelodeon and Amazon Prime Video.