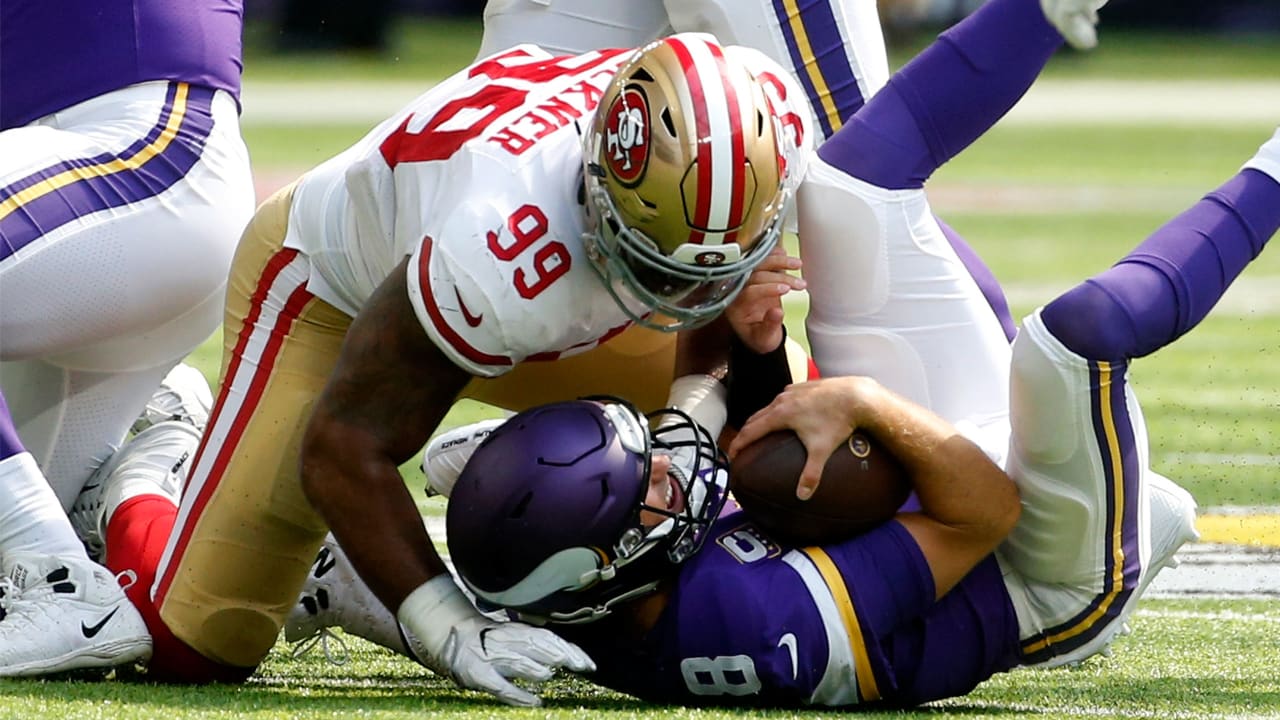 The San Francisco 49ers kick off the Divisional Round weekend by hosting the Minnesota Vikings at Levi’s® Stadium on Saturday. Heading into Saturday, Minnesota is playing on a short week following the physical overtime victory over the New Orleans Saints in the Wild Card Round. Meanwhile, the 49ers are looking to make their first trip to the NFC Championship Round since 2013 with a win on Saturday.

There are a number of storylines to watch heading into this NFC battle. We are joined by NFL Network Analyst Steve Wyche to discuss four pressing topics ahead of the 49ers win or go home matchup. Wyche has served as a reporter, analyst and studio host for NFL Network and senior writer for NFL.com since 2008. Without further ado, here are this week’s Playoff edition of Four Downs:

1. What do you see as the top storyline heading into Saturday?

@KeianaMartinTV: The 49ers DO have playoff experience

The Vikings are making their third postseason appearance in the last five years. As for San Francisco? This young 49ers team will make its first playoff appearance since 2013, a year where more than half of the roster had yet to make it into the league – with some still in high school. Many would argue that the 49ers don’t have the “playoff experience” required to outduel their opposition, however, I beg to differ.

The 49ers have had their fair share of deficits, lopsided scores and contested games that they managed to battle their way from. If you look back at San Francisco’s final eight games of the season, seven came down to the final possession and were decided in the waning seconds of the game. This 49ers team is battle-tested and has been forced to win in a multitude of ways this season. Those nail-biters built character. Kyle Shanahan said it himself that every week has felt like playoffs to this team. Those 10 combined wins over the last two seasons (2017-18) was a valuable part of this team’s maturation. While the “history” may not show it, the proof lies on tape.

For this team it’s Jimmy Garoppolo. All everyone is going to be talking about is “is he ready?” Yes. He went to the Super Bowl as a backup. He’s had his big moments this year. He’ll need to get past this hurdle, which is Minnesota’s defense, because they are coming with it. They’re very physical. They’re very fast. They’ve got linebackers very similar to the 49ers who can run and who can deliver “pop.” If Garoppolo can get through this, then the 49ers can go all the way. They’re that team. If you look at what’s ahead after this, it’s either Russell Wilson or Aaron Rodgers. And this question is going to go into the conference championship the same way – “Is Jimmy that guy?” He’s answered. He’s rung the bell and answered that bell all season. And this is going to be that storyline again.

2. Of Minnesota’s weapons on offense, who is the most crucial to stop if the 49ers hope to win?

Adam Thielen is another name to look out for, but it can’t be overstated the importance of shutting down Minnesota’s passing game. Diggs was visibly upset on Sunday against the New Orleans Saints about being limited to just two catches on the day. He’s a playmaker and wants the ball in his hands. Diggs enters the game having missed the first two practices of the week with an illness. He told the media he won’t let a “little flu” keep him out of the playoffs. Diggs led the team with 1,130 receiving yards this season for an average of just under 18 yards per reception. Whether it’s Richard Sherman, Ahkello Witherspoon, Emmanuel Moseley (Kyle Shanahan has yet to disclose who will get the start on Saturday) or even K’Waun Williams in the slot, the 49ers top-ranked passing defense will need all hands on deck against Minnesota’s talented group of receivers.

I was with the Saints last week, and leading up to the game they said Dalvin Cook changes things for them offensively. We saw how he changes things. The Saints hadn’t allowed a 100-yard rusher all season. Cook had 84 in the first half on 16 carries. They pounded him. He’s a physical player and he’s an explosive player. He’s got incredible agility. He’s like every one of the 49ers running backs. The same things they do as a unit, he’s them in one guy. You have to slow him down. You can’t let him keep moving the chains. You take them out of what they want to do offensively and then that’s when you can start to really dial things.