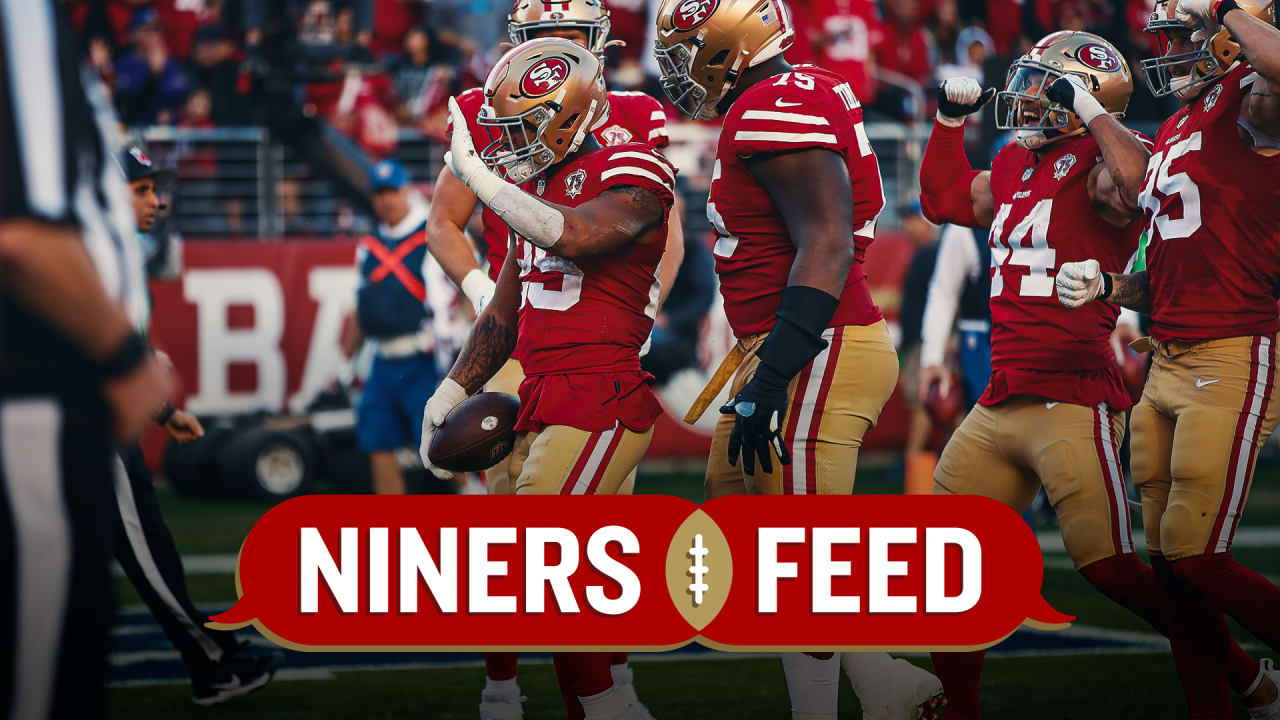 Sunday’s NFC showdown against the Minnesota Vikings was not for the faint of heart following a back-and-forth battle that ultimately finished in San Francisco’s favor. After a shaky start, San Francisco was able to go toe-to-toe with Minnesota’s high-powered offense while the 49ers defense was able to capitalize on turnovers and hold off any hopes of a last-minute comeback. Coming off of Sunday’s win, the 49ers have posted three-straight games of 30-plus points. San Francisco has now improved their record to 6-5 and currently occupy the sixth seed in the NFC playoff picture.

“I don’t know if it’s the weight because of the playoff implications and records or things like that,” Kyle Shanahan said. “I think it’s the weight because of where the two teams are at in the year. We didn’t play, we feel, as good of ball as we should have early in the year and I think Minnesota, speaking for them, I think they felt the same. I think both have been playing real good ball the last couple weeks. We had some ground to make up and that’s why we believed it would be like a playoff game because of how the two teams were playing inspired and had everything on the line.

“I was real proud of our guys, how they handled it and all the different stuff that came throughout the game.”

Here are a few takeaways from the game:

After taking care of the football in back-to-back weeks, San Francisco coughed up the ball early on their first drive of the game. On 3rd-and-12, Jimmy Garoppolo overthrew a pass intended for Brandon Aiyuk that was picked off midfield by linebacker Harrison Smith. According to the quarterback

Minnesota capitalized off the pick with a pass from Kirk Cousins to Adam Thielen in the back of the end zone to give Minnesota the early 7-0 lead.

San Francisco responded with a six-play 75-yard drive that was capped off with a Deebo Samuel 20-yard touchdown run. Per Elias Sports Bureau, Samuel is the first wide receiver in the Super Bowl era to score a rushing touchdown in three-straight games.

The most impressive play of the drive was running back Elijah Mitchell﻿’s 15-yard carry. The rookie followed his blockers and made a cut back to reverse the field for the gain.

San Francisco’s defense managed to slow down Minnesota’s high-powered offense. Kirk Cousins and Co. were limited to 318 yards and their offensive unit recorded two fumbles and an interception on the day. Minnesota entered the game with just seven turnovers on the year and committed two against the 49ers.

San Francisco’s newcomer ﻿Charles Omenihu﻿, who the 49ers acquired in a trade with the Houston Texans, made a crucial third down stop to force a Minnesota punt. The pass rusher came off the edge and tackled running back Dalvin Cook behind the line of scrimmage for a loss of yards.

﻿Kevin Givens﻿ forced a fumble on Cook that was recovered by ﻿Azeez Al-Shaair﻿. His forced fumble set up a ﻿Robbie Gould﻿ field goal.

Al-Shaair also recorded his second-career interception off of Cousins, who entered Sunday’s game with just two picks on the year. The linebacker led the team with eight tackles and notched a pass defended in addition to his interception and fumble recovery on the day.

“Azeez has been huge,” Shanahan said. “Just the plays he’s made. (﻿Dre Greenlaw﻿), losing him after Week 1, after the first half, Azeez had to come in and play like a starter. He’s done that before in the past, but he’s definitely done it this year. I think he’s been one of our better players. The energy he plays with, how he runs around, he’s prepared every week and getting his hands on those two balls at the end were great.”

﻿Josh Norman﻿ forced a fumble against Vikings tight end Tyler Conklin that was recovered by Minnesota. His forced fumble marks his seventh of the season which currently leads the NFL.

The 49ers managed to outscore Minnesota 21-0 in a 4:09 span of game time in between their final drive of the first half and two scores in the third quarter.

San Francisco’s second score of the game came by way of a 15-play, 85-yard drive that was capped off by a ﻿Jauan Jennings﻿ 3-yard touchdown reception. Aiyuk came down with a key reception, hauling in a 24-yard pass that moved the 49ers to Minnesota’s 6 yard line.

Jennings also hauled in a 21-yard completion on third down on the 49ers first drive.

In the first series of the second half, Samuel ripped off a 49-yard run that set San Francisco up at Minnesota’s 8 yard line. Two plays later, Samuel bounced outside for a 3-yard touchdown. On the first play of Minnesota’s second-half drive, Cousins targeted Thielen, Al-Shaair jumped the route for a pick, the second of his career. The interception set up a Mitchell 2-yard score on the next play to extend San Francisco’s lead, 28-14.

Garoppolo finished his day completing 17-of-26 passes for 230 yards, one touchdown and one interception for a passer rating of 90.2.

Needing just six yards on the day, Samuel eclipsed his first 1,000-yard receiving season on Sunday. The wideout hauled in just one target for 12 yards to accomplish the feat, becoming the first 49ers wide receiver to surpass that mark since Anquan Boldin in 2014.

He finished the day with 66 yards rushing on 6 carries and two rushing scores.