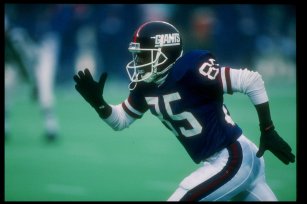 Stephen Baker The Touchdown Maker. The nickname rolls right off the tongue and it was repeated by Giants fans regularly once it came to be.

Baker earned the nickname during Super Bowl XXV when he caught a 14-yard touchdown pass, trimming the Buffalo Bills’ lead from 12-3 to 12-10 with 25 seconds remaining in the second quarter.

The Giants, of course, went on to win that game in dramatic fashion.

“It’s been so long, it’s like I kind of take it as a matter of fact,” Baker told Giants.com, reflecting on his Super Bowl touchdown. “And then sometimes, it will hit me, like, ‘Wow, you know what, you’re one of the few people that’s scored a touchdown in the Super Bowl.’ If you look in Giants history, there are not that many. And a lot of great players never did, like the great Walter Payton. So sometimes I have to pinch myself and say, ‘You know what, you did do something pretty special.’”

How much will it cost NFL players for COVID…