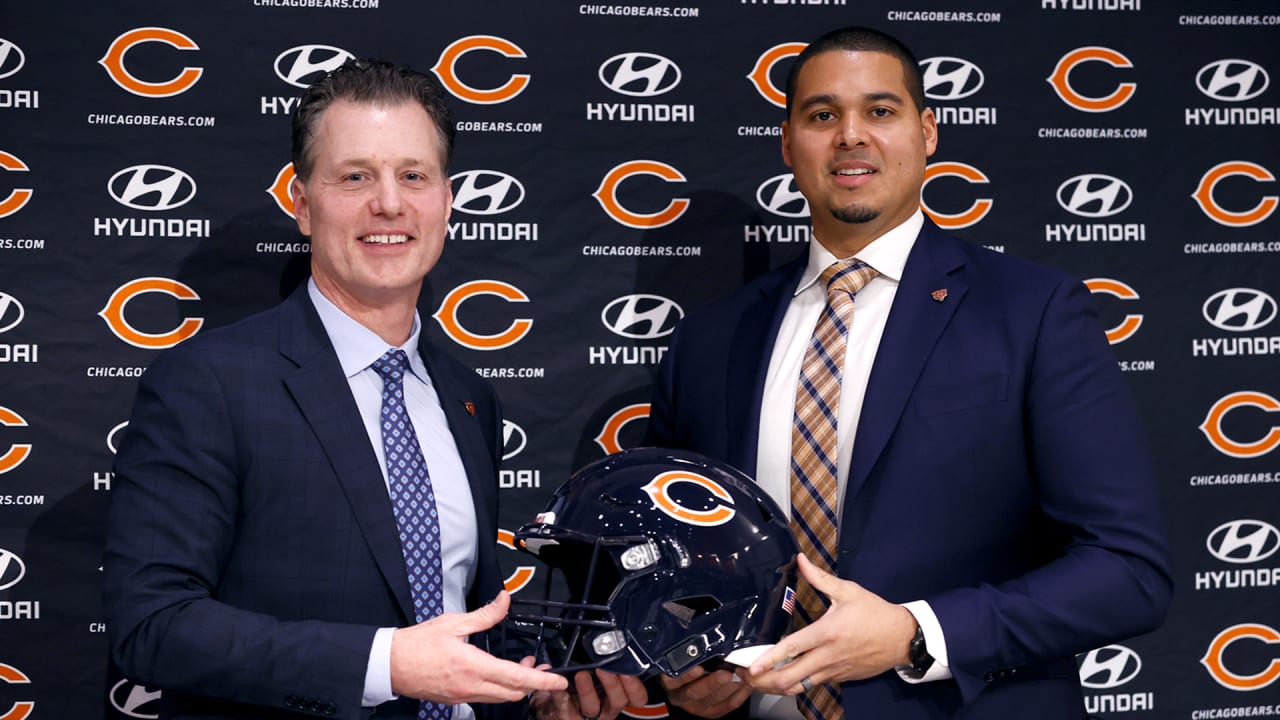 (2) After being hired as general manager, Poles assumed control of the head-coaching search and knew almost immediately that Eberflus was the ideal candidate for the job.

“This head coach search started way before 2022,” Poles said. “The moment I knew I wanted to be a general manager, I began looking for specific traits that define a successful head coach, and the results were leadership, poise, emotional intelligence, a development of mindset, discipline, detail, toughness and energy.

“Those traits are results of many conversations with Hall of Famers, Super Bowl champions, CEOs, players and leaders of life. I was also looking for a brother to create an elite partnership with. When Matt walked in the door and interviewed, even without knowing, he just started checking off all the boxes. He described a detailed plan that had depth. He talked about building relationships with players and setting a new standard and, most importantly, he wanted to do all of that with the Chicago Bears.”

Eberflus joins the Bears with 30 years of coaching experience, including 13 in the NFL. He spent the last four seasons as Colts defensive coordinator, leading the league’s only defense that ranked in the top 10 in scoring, rushing yards and takeaways each of the past two years.

“The beautiful thing about the NFL is what you see on tape usually is a reflection of the person behind it,” Poles said. “And it was a fast, violent effort, a very good defense. But it was more the style that they played with that got my attention. And then just everyone networks and tries to get to know people throughout the league. I was able just to call him and meet him years ago just to understand what he was all about, what kind of person he was, and from that there’s a little bit of a relationship. But it went even deeper when we got into the interview process.”

The bond that rapidly developed between Poles and Eberflus was evident to McCaskey.

“[Poles] told me that two things about Matt were especially persuasive for him: Matt’s unmistakable passion and the connection that the two of them quickly established,” McCaskey said. “It’s absolutely critical that the general manager and the head coach are aligned on the vision and the philosophy for moving the franchise forward, and we believe we have that in Ryan Poles and coach Eberflus.”

(3) From the draft to free agency, Poles described his plan to turn the Bears from a team that hasn’t won a playoff game since 2010 into a perennial contender.

“In terms of building through the draft, I think what’s key is knowing what scheme you’re running and finding players that fit,” Poles said. “That’s first and foremost. If I bring someone in going against what we’re running, well then it’s not tied together and that’s hard to fit.

“The types of players, in terms of their background, what they’re about, how passionate they are about football is important, too. That’s the other place where misses can happen in terms of ‘Do they love football?’ because this is hard. This is really hard. Being a player is very hard. You’ve got to love it to get up in the morning and want to be the best you can be.

“And then in terms of valuation, you’ve got to prioritize certain positions because of supply and demand and place them on the board where you can get them. That’s the other important part.”

(4) Eberflus vowed that the Bears will be known for relentless effort and hustle.

“We will play at a high tempo, a high effort, attacking, physical style, built upon speed, quickness and explosive athletic ability,” Eberflus said. “We will carry ourselves with an attitude of energy, passion and intensity. We will play with maximum effort on every play. My next piece of advice for the players is get your track shoes on because we’re running.

“People always ask, ‘Hey, how do you get a football team to play hard, to play fast, to play physical, to know exactly what they’re supposed to do? How do you do that?’ That’s always a question that I get asked, and it’s a foundational piece. So, what we want to do is build the foundation. This first year we want to build this foundation of what we’re going to look like, of what Chicago fans, alumni, can be proud of. And the foundational pieces are hustle, effort. We’re going to be an effort-based team.

The hustle aspect is the beginning of a “HITS” principle that Eberflus intends to instill in all three phases of the team.

“The next ‘T’ is taking care of the ball and taking the ball away. It’s all about the ball. That’s the most important thing for winning and losing is taking the ball away and protecting the football. And then the last one is ‘S.’ It’s being smart, situational players. So, smart is really being what? No stupid penalties. Make sure we’re squared away with the penalties. Should be in the top five every year in penalties. The next thing is situations: being great in red zone, third down, two minute, backed up, and being smart situational players.”

(5) Poles and Eberflus will begin a thorough evaluation of quarterback Justin Fields﻿, as they will do with every player.

The Bears traded up nine spots in the first round of the 2021 draft to select Fields out of Ohio State. As a rookie, he appeared in 12 games with 10 starts, completing 58.9 percent of his passes for 1,870 yards with seven touchdowns, 10 interceptions and a 73.2 passer rating. He also rushed for 420 yards and two TDs on 72 carries.

“I’m a big process guy, so I want to be able to help the player. When you look at the player-coach relationship, it’s got to be like this. One of the ways we help all players, from Player A to Player Z, we’re going to develop a plan for those guys to get better.

“It’s usually only three or four things. You sit down with them, show them the tape: ‘This is what you’re going to get better at.’ They work on their own in the offseason. Then when they come back here with us in April, then we start working on the detailed plan. But we don’t just say, ‘OK, hey, that’s good.’ We have a detailed plan in terms of how to work towards that all the way through. And then when you improve that skill, you move to the next one. It’s a plan in place and I’m looking forward to doing it with all the players.”

“One thing we talked about, too, is anytime you evaluate a player and put a plan in place,” Poles added, “the big thing is finding out what they do well, and whatever they do well, maximizing that. And then find their weakness and do what coach just said in terms of attacking the weakness to get better in those other areas. But I think the key thing is, ‘what do you do well,’ and we’re going to do that a lot, and then fix the holes and get better as we go.”

Tags: he poles was