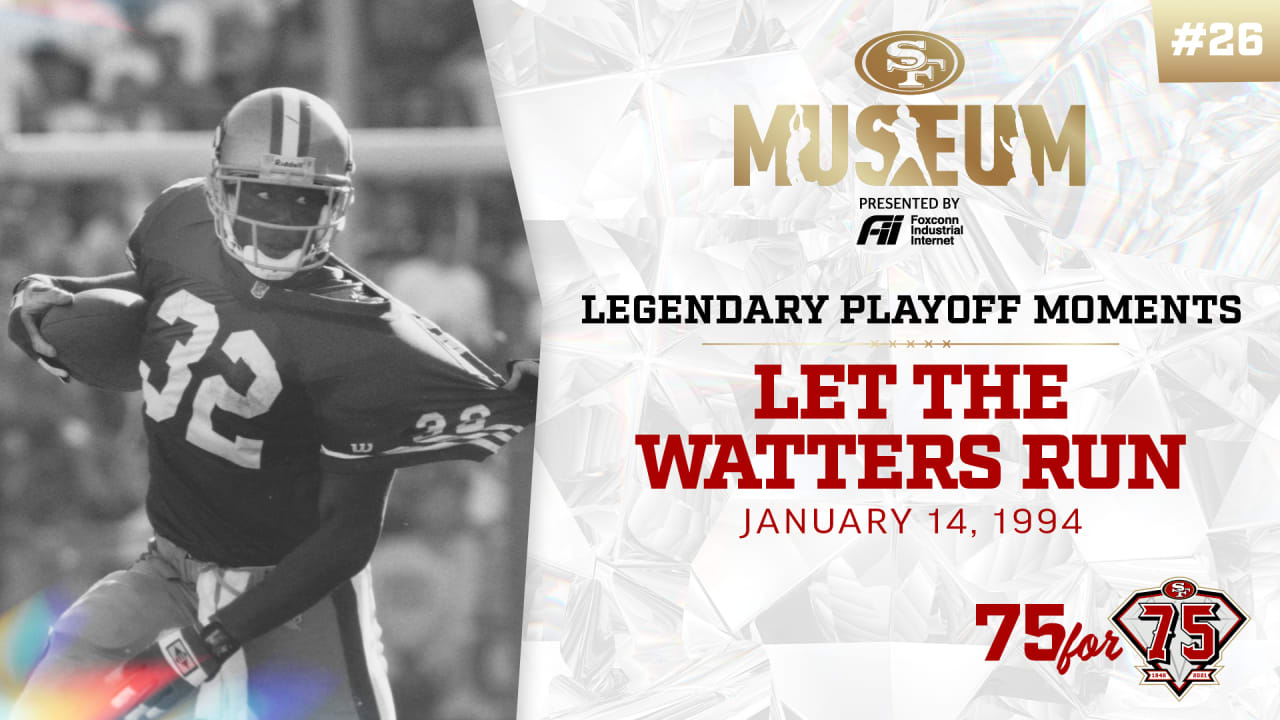 “75 for 75” is an article series from the 49ers Museum highlighting legendary moments in 49ers history as part of the team’s 75th Anniversary celebrations in 2021.

“Sometimes running backs get on a roll and it’s best to keep giving them the ball,” former 49ers offensive lineman Jesse Sapolu recalled. “Ricky was hot. In the huddle, we kept saying, ‘Let the Watters run.'”

Quarterback Steve Young was happy to oblige. The 49ers opened the game by driving 80 yards in eight plays. Watters finished it by waltzing through the right side of the line behind guard Ralph Tamm and tackle Harris Barton for his first score.

“(Offensive line coach) Bobb McKittrick spotted a gap in the Giants defense,” left tackle Steve Wallace recalled. “So that’s where we ran our play, a dive to the right, and Ricky literally walked into the end zone.”

San Francisco marched to the red zone twice more in the second period. Just as Wallace noted, each time the Giants failed to make the necessary defensive adjustment. The 49ers happily ran the same play to the right for two more scores.

“I was pumped up,” Watters said. “It was a great challenge playing against LT [Lawrence Taylor] and that great defensive line.”

The 49ers took a 23-3 lead into the locker room at halftime. Wallace sensed a dominating performance from the offensive line and was keen for a piece of the action.

“I was on the left side and had Lawrence Taylor in front of me,” Wallace said. “I wanted to run it right at him.”

Nevertheless, the 49ers offense was not about to give up on a good thing and Wallace’s pleas went unheard. Each time the 49ers neared the goal line they ran the ball to the right. Watters’ five touchdowns on runs to the right side totaled just 12 yards.

“The Giants never adjusted so we kept scoring on the same play,” Wallace said. “Taylor had no tackles. It was his last NFL game. I wanted to lay him on his backside at least once and put the icing on the cake.”

Watters carried 24 times for 118 yards and caught five passes for another 46 yards. New York never had a chance against the running rampage. San Francisco dominated the Giants in every phase of the game, posting 413 offensive yards to the Giants 194 yards. When not handing off to Watters, Young was coolly efficient throwing for 226 yards.

“LT came up to me (after the game) and patted me on the back. He said, ‘You’re running your butt off. Keep it up.’ That’s a lot coming from him,” Watters said. “To me, he’s still the greatest linebacker to play the game, a legend.”

Watters finished the 1993 campaign with 17 touchdowns—11 TDs in regular season and six more in the postseason.