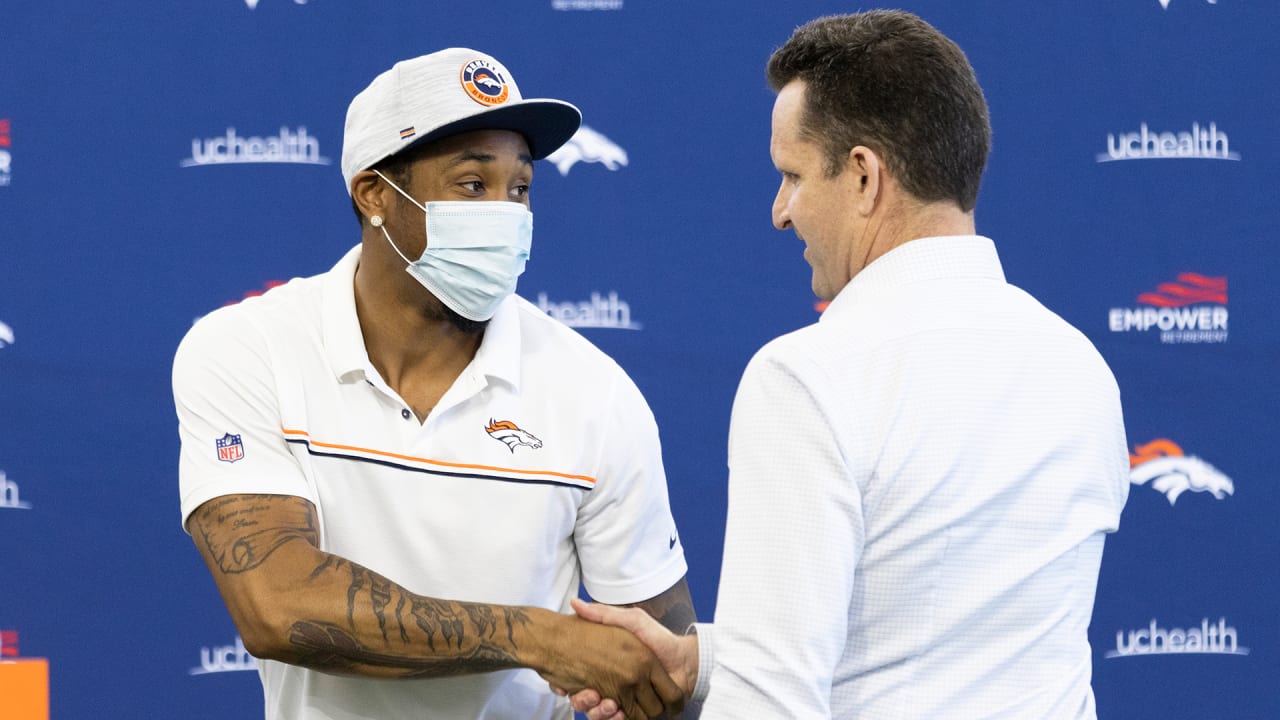 The Broncos shook up their running back room during the first week of free agency, as they parted ways with former Pro Bowler Phillip Lindsay and signed former Viking Mike Boone.

Boone profiles as a special teams star with intriguing talent as a running back. He didn’t see much action in Minnesota behind Pro Bowler Dalvin Cook, but he posted a 100-yard game in one of his two career starts. In his opening press conference, he also spoke about the value he could add in pass protection and as a pass catcher.

“He was playing behind Dalvin Cook, so he didn’t have a lot of opportunity, but when he did have the opportunity, he really produced,” Paton said. “I think he’s going to help our room. He’s going to add some special teams to the offensive side of the ball, which we lack. I’m really excited to have Mike Boone here.”

It seems possible that the Broncos could still add another running back in the draft. Royce Freeman, LeVante Bellamy, Jeremy Cox and Damarea Crockett also remain under contract.

Denver’s only move at arguably its deepest position group was internally focused. The Broncos placed a second-round tender on Tim Patrick, which will hopefully keep the team’s 2020 receiving touchdown leader in Denver for another season. If another team presents an offer to Patrick, the Broncos will have the chance to match the contract or receive a second-round pick as compensation.

The Broncos also tendered exclusive rights free agent Diontae Spencer, who has been a spark in the team’s return game over the past two seasons.

Barring something drastic, it seems the Broncos should be set at this position group.

The team may choose to add another player via free agency or the draft, as Jake Butt and Troy Fumagalli became unrestricted free agents when the new league year began.

Denver has yet to make a significant move along the offensive line, but the unit could improve in 2021 as 2019 free-agent signing Ja’Wuan James returns from the Reserve/Opt-Out list. James has played just three games — and just over 60 snaps — for the Broncos in the two years since he has signed, but he has plenty of talent and appears ready to return.

“He definitely is planning on coming back and being part of the team moving forward,” Head Coach Vic Fangio said in early March. “He’s down south right now training. I’m expecting him back here in mid-to-late March for him to start training here with us and using our facilities. If OTAs come about, partaking in those. We’re counting [on] and anticipating him being a part of our team next year.”

If James mans the right tackle position, Denver’s offensive line should be as good on paper as it has been in years. The team re-signed Garett Bolles last fall after he took a major step forward, Dalton Risner and Lloyd Cushenberry III continue to show promise as young players and Graham Glasgow played well in his first season in Denver.

The team tendered exclusive rights free agent Calvin Anderson, which should give the Broncos some depth at tackle after Elijah Wilkinson and Demar Dotson both became unrestricted free agents. If Denver adds to the offensive line in the draft, it may be at the tackle position to add depth.

Denver should have strong depth along the interior of its line, as sixth-round pick Netane Muti showed promise in limited action in 2020. Austin Schlottmann and Patrick Morris are also players along the inside of the line with NFL experience who remain under contract.

Kansas City Chiefs have a history of NFL draft…