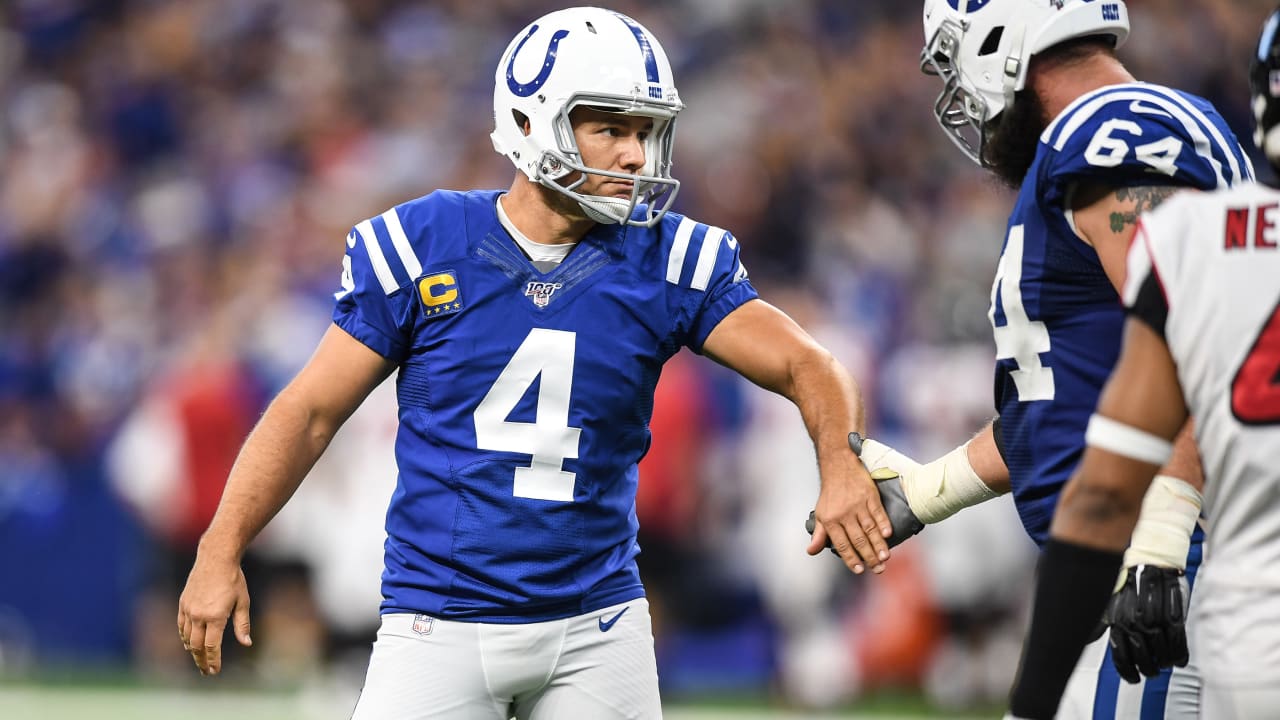 INDIANAPOLIS — Adam Vinatieri is used to hearing loud cheers after his kicks split the uprights, but the 60,000-plus fans at Sunday’s 2019 Indianapolis Colts home opener against the Atlanta Falcons wanted to send a message as he took the field for the first time midway through the first quarter.

Vinatieri encountered perhaps the roughest two-game stretch of his career to open the season, but just like his head coach and teammates, the fans on Sunday wanted Vinatieri to know they had his back. So after the Colts’ first offensive drive stalled at the Atlanta 33-yard line, the crowd broke into a loud ovation even before the 24-year veteran started his jog onto the field.

Ultimately, the result of that attempt — a 48-yarder — was good. Nevermind the fact the ball bounced off the left upright before ricocheting back through; one could say Vinatieri had a good bounce or two coming his way, and his good fortune on that initial kick Sunday set in motion a solid afternoon of work.

In all, Vinatieri connected on all five of his kicks on Sunday, which included two field goals and three extra-point attempts. His efforts were crucial as the Colts escaped with a three-point win, 27-24, over the Falcons to improve to 2-1 on the year.

“For me it was just about getting back out there, doing your job and doing what’s expected out of you,” Vinatieri said after the game. “It’s a hard-fought game and we needed every single point that we got. The guys played well and I’m happy that I got to contribute a little bit.”

Vinatieri connected on one of his three field goal attempts, and one-of-two extra point tries, in the Colts’ overtime loss to the Los Angeles Chargers to open the season before missing on two more extra-point attempts in last week’s road victory over the Tennessee Titans. But he had the clear backing of his head coach, Frank Reich, every step of the way.

“I just want to make this clear – Adam is our kicker. … He’s not only our kicker, he’s an instrumental leader on our team,” Reich said of Vinatieri the day after the Titans victory. “When we talk about toughness and what we’re all about as a team and a program, there is probably no one who epitomizes that more than Adam. Just want to make sure that’s clear.”

Perhaps not surprisingly, then, Reich had a business-as-usual answer when asked about Vinatieri’s bounce-back performance against the Falcons.

“Yeah, I mean, that’s what we anticipated,” Reich told reporters after the game. “We really felt good about (it) – just kind of as expected.”

Vinatieri’s teammates also have stood behind the future Hall of Famer. Quarterback Jacoby Brissett — who had a career-best performance Sunday with 310 yards passing and two touchdowns — mirrored his head coach’s comments when asked about Vinatieri’s performance after the game.

“We expect it,” Brissett said. “You know, he’s the greatest of all-time for a reason. We all go through our points where things don’t go our way, but I can honestly say that Vinny hasn’t changed, his preparation hasn’t changed. He still comes in with a smile and does his thing, and he’s gonna do Vinny things.”

Vinatieri will continue to take that same approach into this week’s preparations for the Colts’ Week 4 matchup against the Oakland Raiders at Lucas Oil Stadium. Indy then travels to take on the Kansas City Chiefs on Sunday Night Football before heading into its bye week.