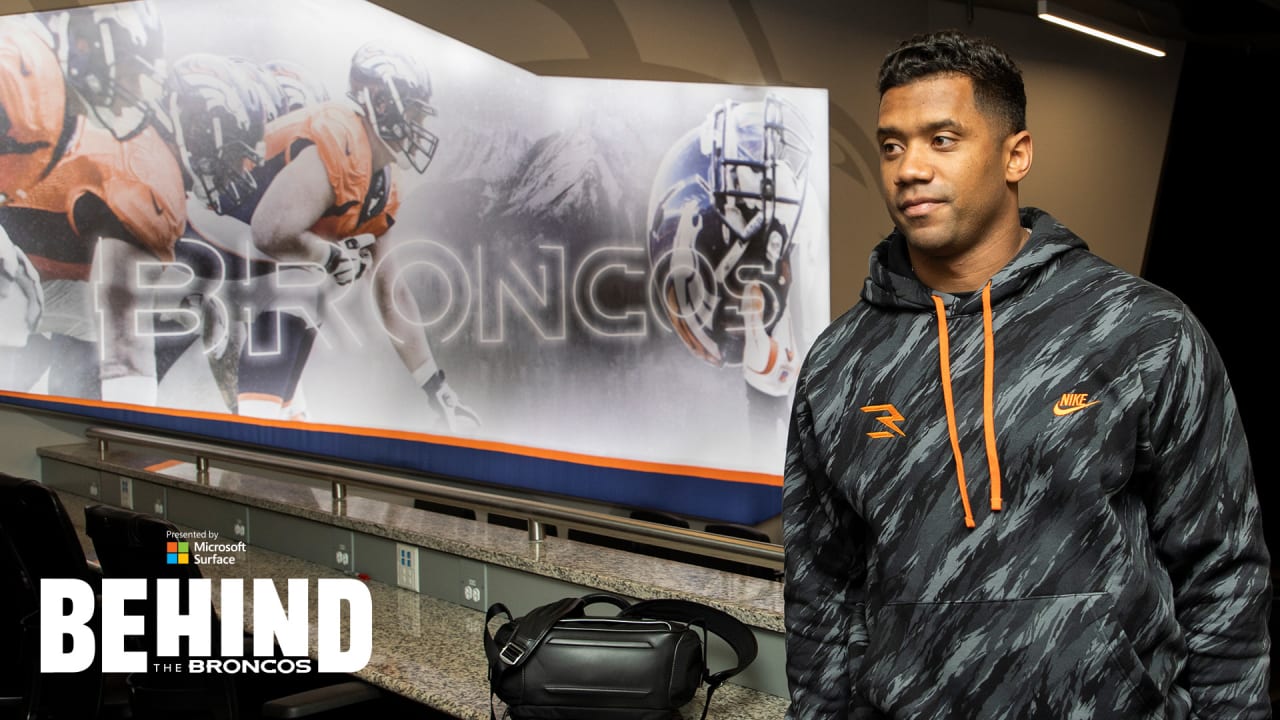 The latest episode of “Behind the Broncos” is out, and there should be no surprise about the focus of the show.

Following the Broncos’ blockbuster trade for Russell Wilson, it only felt right to dedicate an episode to Wilson’s first days in Denver.

In this episode, you get a glimpse into Wilson’s first moments with the team, his visit to Children’s Hospital Colorado, his introductory press conference and more.

We’ve listed a few of our favorite moments below, but this is an episode you won’t want to miss, so make sure to check out the whole show.

The show begins with Russell and his wife, Ciara, video-chatting their kids to share the big news.

One of his kids chimes in, sounding incredulous: You’re playing for the Broncos?

Over the rest of the scene, we get a look at Wilson’s tour of the locker room, the quarterback meeting room and the team meeting room.

“Going to be a lot of winning in here, a lot of hard work,” Wilson said. “It all starts here. … Focus level’s got to be at an all-time high.”

Wilson also outlines what it means to him to join a new team.

“I’m excited to be a Denver Bronco,” Wilson said. “What it means to me, it’s about championships, it’s about winning culture, it’s about tradition. It’s about making sure we’re doing it at the highest, highest level possible. I’ll do whatever it takes to win. It’s also about the community too. So I’m grateful to be here. I know the Colorado Rockies drafted me a long time ago, so I feel like I’ve been here before, and I can’t wait.”

We continue to get a look at Wilson’s tour around the facility, as he meets with John Elway and Offensive Coordinator Justin Outten and introduces himself to wide receiver KJ Hamler. Wilson receives a Rockies jersey and explains the significance, and he gets a tour of the team’s equipment room.

The best moment, though, comes when he meets wide receiver Tim Patrick. The Broncos’ receiver slaps hands with Wilson, chats for a second, and then is so excited that can’t help but smile and embrace Wilson again.

Wilson touches in the segment on talented teammates like Patrick as he explains the keys to finding success.

“The most important qualities a team must have to be successful: No. 1, you’ve got to have great players,” Wilson said. “I think that’s a key part to it. But you also have to have great coaching. I know we have those two things. I think you’ve got to have a great fan base. We definitely have that. And I think the last part of it is, you’ve got to have great vision and great execution. Those two things together is everything. So we’re excited about the journey. We want to have the loudest stadium in football. We want to have the most energy as possible. We want to be able to travel and win all of those games too. We’re really looking forward to the opportunity, and I’m looking forward to being your quarterback. I’m proud to be a Denver Bronco.”

‘THIS IS WHAT LIFE’S ABOUT’

As we see in the episode, it didn’t take much time at all for the Wilsons to become involved in the Denver community.

In this episode, we see Russell and Ciara travel to Children’s Hospital Colorado to meet young patients and read their “Why Not You?” children’s book. In the segment, we get to see the Wilsons interact with several fans, including one patient who shares that she often uses Ciara’s music at dance class. The Grammy-winning singer promises that there’s new music coming soon.

“It’s been a blessing,” Russell Wilson said. “There’s so many amazing kids here. It’s an amazing hospital here, Children’s Hospital Colorado. It means a lot to me and Ciara. This is what it’s really about. All the wins and winning championships, that’s important. But to be able to impact lives and hopefully be able to save lives with these amazing doctors and nurses and staff members, to bring resources and help with our foundation — the Why Not You Foundation — … is really cool too. This is what life’s about.”

Why the Broncos look ‘like a roster ready to…