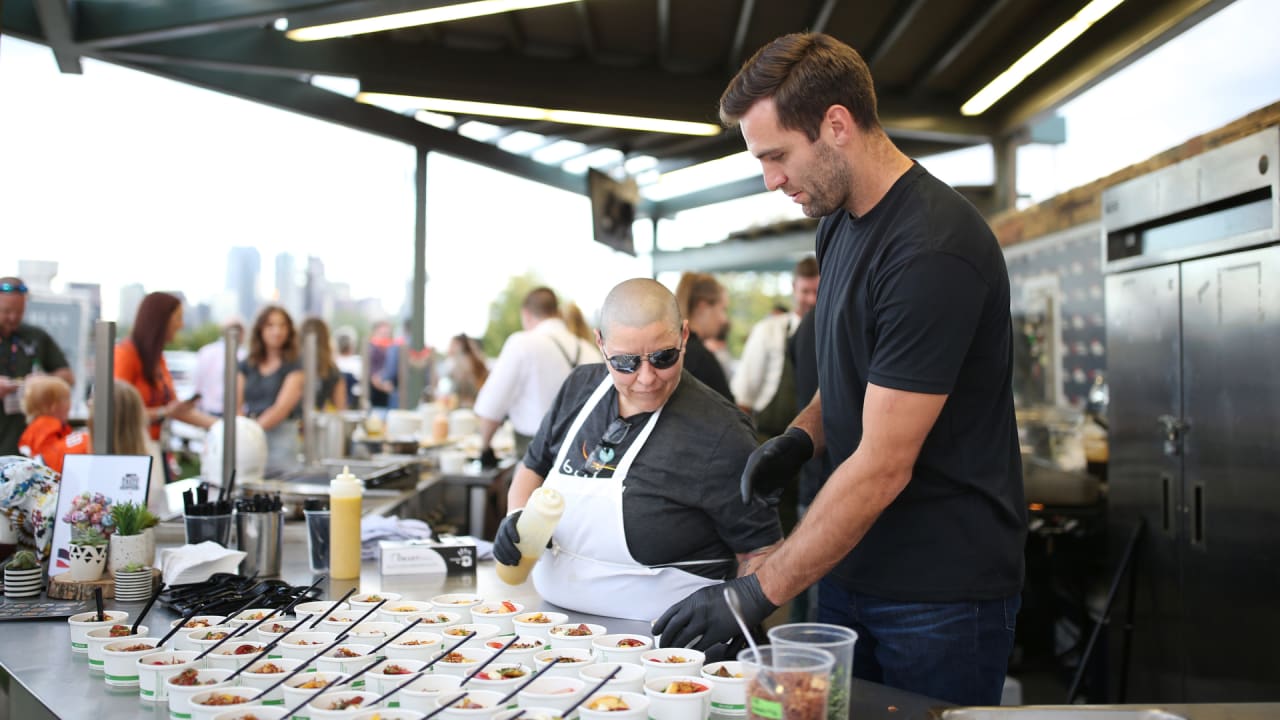 DENVER – About 24 hours after a heartbreaking home opener, Broncos Country washed the bitter taste from their mouths with local cuisine from 30 Denver restaurants as part of the team’s fifth annual Taste of the Broncos presented by King Soopers.

The Broncos faithful filled Noble Energy Sports Legends Mall on the south side of Empower Field at Mile High to sample everything from whiskey-flavored ice cream to chicken caprese “Flacco Bowls” — and to meet some of their favorite players.

More than 40 Broncos players mingled with fans, helped prepare food and raised money for Food Bank of the Rockies and Denver Broncos Charities.

“This is the only event where you get this much time alone with fans and they get to see you more as a person, rather than just a football player,” Brandon McManus said. “They get to meet you more. It’s exciting any time we’re out here, especially when you have over 40 teammates here — it’s almost the whole team. To help support the community is the best thing you can have.”

McManus emceed the event and joked that his job behind the microphone was more nerve-racking than his job kicking in front of 76,000 fans.

The relationship between the fans and the Broncos players, each in their jerseys, drove Chef Troy Guard of TAG Restaurant Group to serve as lead chef of the event. Guard takes pride in the event’s unique ability to bring football and food together.

“Obviously, I love food. It’s a good way to give back in our community,” Guard said. “But football always brings people together and that’s really, really good. So, why not use football and food at the same time?”

Veteran quarterback Joe Flacco found himself a rookie among his more experienced Taste teammates, but he enjoyed garnishing chicken caprese bowls at Guard’s booth and calling fans over to give them a try.

“It doesn’t matter how long you’ve been here,” Flacco said, “it’s always important to reach out and touch everybody in the community and show that you’re a part of it.”

President of Football Operations/General Manager John Elway fielded questions from fans during a VIP session at the start of the event. Elway expressed his frustration with the end of Sunday’s game and discussed his skills as a chef – proving that he too is part of both the food and football community.

A regular at Taste of the Broncos, Justin Simmons surrounded himself with fans and answered questions about both Sunday’s game and his favorite food.

“Events in general are super important,” Simmons said. “A bunch of the team loves to go out to the events, to show face and get to meet people on a personal level. This is probably one of my favorite events to do.”

Former Broncos linebacker and Ring of Famer Karl Mecklenburg continued his work in the fight against hunger and mingled with fans throughout the evening.

“It doesn’t matter what your background is, what your political affiliation is, this is [for] everybody, so it’s a cool event,” Mecklenburg said.

As the sun went down and the attendees drifted toward the dessert booths, Erin Pulling, President/CEO of the Food Bank of the Rockies, expressed her gratitude to the Broncos fan base.

“Thank you to King Soopers as our presenting sponsor this evening, and to all of our sponsors and to every single one of you for being here this evening to support the Broncos charities and Food Bank of the Rockies,” Pulling said. “By enjoying this great food this evening, you are helping to make sure that those don’t go without food in our community.”

A palpable sense of frustration had filled Empower Field at Mile High and the Broncos’ locker room a day before, but on Monday night, the feeling was replaced by the smell of local food and the happier feeling of giving back to the Denver community.

“Coming out here, getting to have a little bit of a conversation with the fans, shake hands, it’s important, even after a loss,” Simmons said. “A lot of people here are disappointed, but saying [things] like, ‘We love how hard you guys played. We’re behind you for the rest of the season. It’s only Week 2,’ as a player, that’s comforting to hear from your fan base, as well.

“We always have the best fans.”