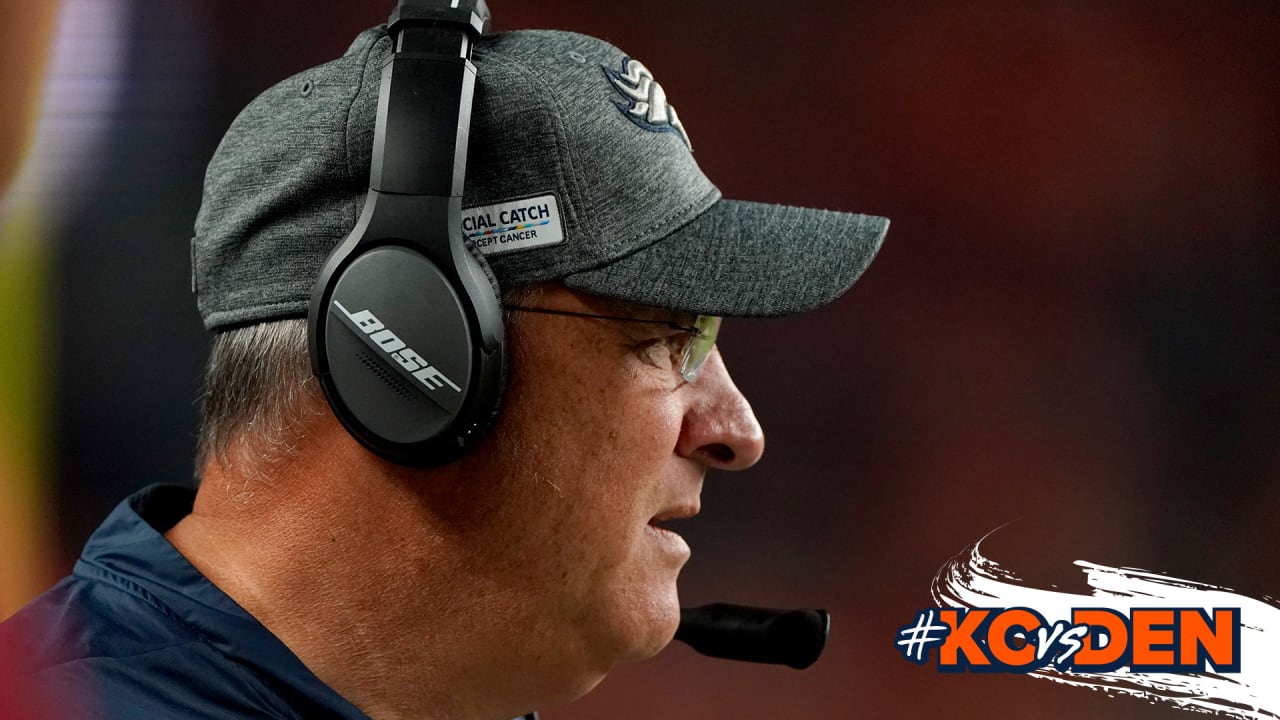 ENGLEWOOD, Colo. — As the Broncos moved closer on Thursday night to an eighth consecutive loss to the Kansas City Chiefs, the home crowd grew increasingly displeased.

The solution to the Broncos’ woes start with avoiding critical errors — and Denver made plenty on Thursday. The passing game struggled, the Broncos picked up key defensive penalties and the special teams unit gave up a big punt return and failed to convert a fake punt.

“You just keep coaching them on, ‘This is a winning play,’ and, ‘This is not a winning play,” Fangio said. “Keep showing them the mistakes that are correctable and hopefully they keep grinding away at that. A lot of our poor play, as it is for a lot of teams, is self-inflicted. Very few times are you just dominated and whipped one-on-one. It happens, but our problems are more self-inflicted a lot [of the time]. Some of it, we are getting whipped both in blocking and coverage, meaning running the routes. Some of it has happened on defense. We get whipped in coverage and get blocked. More so, if you can just play the fundamental principles of the call on both sides of the ball and kicking game and do it correctly, more times than not you’ll be all right.”

The Broncos have a few days to make changes before they travel to Indianapolis for a Week 8 game on Oct. 27, but Fangio said the team will not “make a change just for the sake of making a change.”

Fangio said Garett Bolles will remain the team’s left tackle “right now” and that he would not consider a change at quarterback.

The Broncos’ offense, which ranks 29th in points per game and is 3-for-27 on third down over the last two games, surely needs a boost after allowing eight sacks on Thursday.

Fangio, though, is convinced his players will forge ahead with the right mindset even as the team sits at 2-5.

“I think these guys are grinders,” Fangio said. “They have been up to this point. We will be as a staff. I believe they’ll continue to do that.”

Tackle Ja’Wuan James, who hasn’t played since Week 1 as he recovers from an injury, “probably” would’ve played in Week 7 if the Broncos had played on Sunday.

“He didn’t feel comfortable — nor did I — of putting him out there without practice time,” Fangio said. “He hadn’t had enough quality practice time and he’d been out six weeks. I think it’s always a coach’s duty to not put a player out there that’s not ready. He’s cleared medically, but there’s another part of the equation when it comes to recovery and rehab. I don’t think he had completed that part yet.”

James will increase his activity ahead of the Broncos’ game against Indianapolis.

Fangio said safety Will Parks will “be out a couple weeks for sure” after exiting Thursday’s game with a hand injury.

Once the players begin practicing, they will have a two-week practice window, after which the Broncos must decide if they want to activate two of the players to the active roster.

“We’ll start practicing those guys that are eligible this week, get a feel and get feedback of where they’re at exactly and decide from there,” Fangio said.

As the Broncos approach the Oct. 29 trade deadline, Fangio said he has had no conversations with President of Football Operations/General Manager John Elway about dealing any of the team’s players.

“We haven’t had any of those discussions yet,” Fangio said. “I don’t know that we will. We’ll see.”