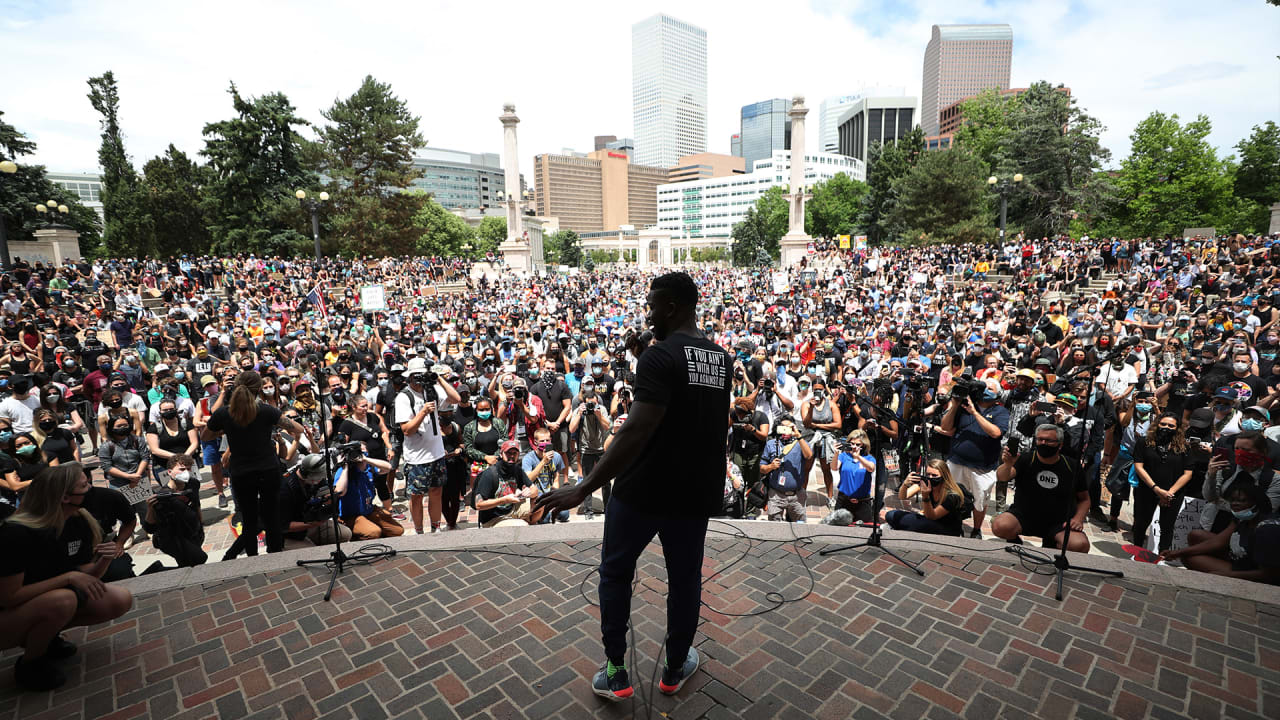 The players’ presence would not present a solution in itself, and they didn’t pretend it would. But they did want to share their stories that speak to the importance of the movement, whether it was Davontae Harris speaking of a fellow Wichita, Kansas, native currently imprisoned, Alexander Johnson talking about wanting to build a better future for his newborn daughter or De’Vante Bausby discussing the importance of growing up in a multicultural environment.

Justin Simmons, who took the microphone after Attaochu, told the crowd that there was something simple that even those who do not face systemic racism can do to make an impact.

“We as a black community need our white brothers and sisters to explain to the rest of the white brothers and sisters out there what it means for black lives to matter,” Simmons said. “It’s important for you to understand that. So for while we may speak to a bigger population of people and we may only reach one and you may go home and speak to five people and you reach one [person], it’s the same number. So your voice matters. It doesn’t matter your platform, your sphere of influence in your life — the people around you matter. Those are tough conversations to have, but they need to be had.”

Then, before the players led a march to Sculpture Park near the Denver Center for the Performing Arts, Von Miller made a brief statement on the importance of seizing the moment.

“The time is always right to do what’s right,” Miller said. “Once we have awareness, we’ve got to come up out of oblivion. We’ve got to always do what’s right. Once we have awareness, we’ve got to use our moral compass to make decisions on what’s right — black, white — it doesn’t matter. It’s 2020. Muhammad Ali, Kareem Abdul-Jabbar, Jim Brown were fighting the same fight and it’s up to us to keep it going. My teammates, they killed it up here. I’m in the locker room with these guys each and every day. I’m proud of these guys, I’m proud of Denver, I’m proud of the state of Colorado. We’ve got to keep this going. Thank you. We appreciate you.”

The players then joined local activists and protest organizers to start the march, linking arms once they passed the state capitol building.

Once the crowd reached Sculpture Park, everyone gathered together again before taking about nine minutes to remain silent and still as they honored Floyd, who died after police officer Derek Chauvin kneeled on his neck for eight minutes and 46 seconds.

Amid the crowd of thousands of members of the community surrounding them, several players were moved by the showing of solidarity throughout the day.

“While it’s beautiful to see so many people coming together, it’s also important to realize why we’re out here in the first place,” Simmons said during the march. “The dehumanization that we have and that we’ve been putting on for years on years on years for the black community has been intolerable, so to see all of these people coming together, all walks of life — black, white, Hispanic, whatever the case may be — it’s encouraging. And that’s really what gives you the hope to keep pushing through.”

With the recurrence of police brutality or racially motivated killings, it’s easy to feel that mixture of anguish and then hope as so many people rally together to work to end it. Attaochu acknowledged that frustration, but noted that this generation is determined to end it.

“It’s disappointing that as human beings we haven’t come to a place where we’re doing right by people — on a heart level, not just on a superficial layer of skin color,” Attaochu said. “I think our generation is tired of it, and we’re ready for change. We want to see things change for people that might be in our shoes, might be lower-class or things like that.”

To create that change and ensure the next generation doesn’t have to deal with these same problems, this kind of work must be done now. As the players said Saturday, voices must be heard, difficult conversations must be had and progress must be made.

“I think about it all the time,” Davis said. “I want to leave a better world for my sons, something that I’m proud for them to have. So us being here today is really about them, changing the world that they have and their children and really making it a great world.”

Tags: do they up