Irvin then asked how many words he could use. Told two, he smiled and said, “Dog, Dog.”

It’s that dog that makes coach Ron Rivera believe the 31-year-old Irvin will help the Panthers (4-3) avoid a collapse following Sunday’s 51-13 spanking by the San Francisco 49ers. After a similar loss last season — by 31 at Pittsburgh — the Panthers lost seven in a row.

Irvin doesn’t let his past define him any more than Rivera wants the Panthers to let their past define them.

“ESPN Pro Football Frenzy Challenge: Win $10,000 on Sunday, Nov. 3! Play For Free, and put together the longest win Streak that day to win!”

Irvin uses his past to drive him to the point that no he longer refers to himself by the name he went by as a teenager growing up in Atlanta.

BJ led a troubled life that Irvin best described in this segment from a December 2017 story published in The Players’ Tribune:

“What I will tell you is that back when I was 17, I was hanging out in trap houses and selling drugs. I’ve been homeless. I’ve been in the driver’s seat of a car that got sprayed with bullets in a drive-by, and somehow I didn’t get hit. I’ve sat in a jail cell and watched a guy make a burrito out of bread, Cheetos and ramen noodles.

“And you know what? If you would have asked me at any of those moments if I believed that I would one day make it to the NFL, I would have said yes.”

Irvin didn’t just make it into the NFL. He was 15th pick of the 2012 draft out of West Virginia, where he returned in May 2018 to get his degree in sociology. He compares that moment to winning the Super Bowl at Seattle following the 2013 season.

Irvin is an elite pass-rusher, collecting 5.5 or more sacks in six of his first seven seasons. He’s on pace to do that again this season with 3.5 for the Panthers. 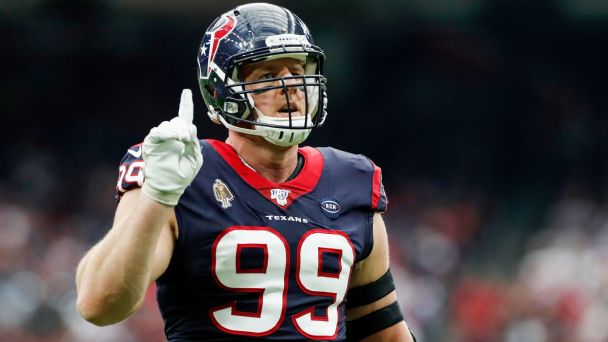 • Can Texans count on Watt anymore?
• Niners ‘enjoy it and move on’
• How Bills fix their run D
• Saints can use Murray more
• Cowboys ‘locked back in’ after bye

Outside of being suspended for the first four games of the 2013 season for violating the NFL’s substance-abuse policy and being ejected from Super Bowl XLIX the next year after throwing a punch at New England tight end Rob Gronkowski in the final 20 seconds of a loss, he’s avoided trouble.

He’s so focused on the future that he hasn’t looked at his Super Bowl ring in more than three years. He doesn’t even want to talk about his past.

That doesn’t mean it doesn’t cross Irvin’s mind. He often looks into the stands and thinks about “all the stuff I went through to get here.” Then he thinks about how blessed he is.

The football field becomes his release, where he lets the “dog” out.

Off the field, Irvin allows himself to occasionally smile. He did that Sunday when he promised he wouldn’t let what happened to Carolina last season happen again.

“You can’t be a dog in real life all the time,” Irvin said. “That’s how people end up in prison beds. You’ve got to be able to tame it, man.”

Irvin released his dog against the 49ers in a way Rivera called “unintended leadership.” He had two sacks, one for a safety early in the fourth quarter with the Panthers trailing 27-3. That led to a touchdown that cut the gap to 14 before everything fell apart.

“A guy like that who is leading by example is really what you want,” Rivera said. “I thought that was outstanding.”

Irvin has been outstanding since missing the first three games with a hamstring injury suffered in the preseason. He has 3.5 sacks for a unit that has 18 of its 30 sacks in the past four games. Their total ranks second in the league, just behind New England (31), a team that has played one more game.

Irvin has made those around him better, including first-round pick Brian Burns.

“Bruce has a unique personality,” Burns said. “He’s unpredictable. There’s no telling what he’ll do. And he’ll fight. Not physical fight, but he’ll fight like he has that dog mentality that nobody will beat you up.”

The Panthers actually tried to get Irvin last year, when he signed with Atlanta after Oakland released him in midseason. Irvin was a player they had researched thoroughly prior to the 2012 draft when they took Luke Kuechly at No. 9, and one they believed would be perfect for the transition from a 4-3 to a 3-4 scheme.

They finally got him in March with a one-year, $4 million deal that could reach $5 million with incentives.

They knew Irvin’s dog mentality was something needed on a unit Rivera said had “no accountability” during last season’s losing streak.

Irvin is all about accountability because he’s held accountable for his past.

“I’m outspoken, very blunt,” Irvin said. “If you’ve got a soft skin, it ain’t going to be good around me. I’m going to build you up, but if something needs to be said, I’m going to say it, too.

“That’s how you build a good defense.”

That’s why Irvin was so defiant when he promised the Panthers will bounce back. He understands better than most what it’s like to overcome adversity.

“I want to win another Super Bowl with the Panthers, be a two-time Super Bowl champion … and I’ll ride off into the sunset.”