TAMPA, Fla. — Tampa Bay Buccaneers tight end Rob Gronkowski has a unique (and rather hilarious) analogy for the touchdown catch he made Sunday on the back-shoulder fade that has become the signature play between him and quarterback Tom Brady in their 11 seasons together — one that they’ve connected on in each of the past two games.

“It’s like a saying my mom used to say: ‘It must be maple syrup because butter don’t drizzle like that,’” Gronkowski said Wednesday when asked about the throw.

What on earth does his mother mean, you ask?

.@RobGronkowski was asked about back-shoulder fades with Tom Brady.

So naturally, he started talking about his mom, butter and maple syrup 🥞😂 @JennaLaineESPN pic.twitter.com/iuKVfm2XmM

Meanwhile Brady is 19-of-27 for 384 yards and five touchdowns targeting Gronkowski on fade routes in the past four seasons, including playoffs, according to ESPN metrics/NFL Next Gen Stats (data prior to 2017 is not available). The only duo to hook up on more fades is Matt Ryan and Julio Jones (20 completions) and no duo has connected for a higher completion rate (minimum of 10 attempts). 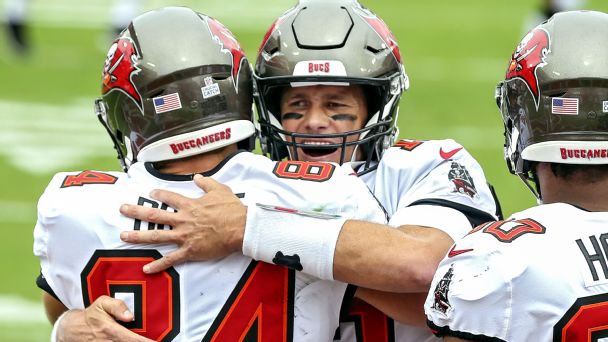 “That back-shoulder fade, we haven’t really practiced that much of it this year, just because there’s a lot of other things that we’ve been trying to do,” Gronkowski said. “But that connection just came throughout all the years of us working together. I just ran my route, he put a perfect ball out there for only myself to go up and make a play, and that’s what happened. It felt good to get back to those terms and split out wide and catch a touchdown like that.”

When asked what it’s like playing with a quarterback known for fitting the ball into such tight spaces in the red zone, Gronkowski said, “It’s great. It’s a lot of trust. You just go out there and you can just play football. You don’t have to think about anything, and wherever the ball’s thrown, you just trust in Tom that that’s where the ball needs to be and you just go up and make the play. That’s just how it’s been my whole career with him. The guy just works hard, puts the ball where it needs to be, no matter what season it is for him. It’s just great to have a quarterback like that.”

Tags: gronkowski his past