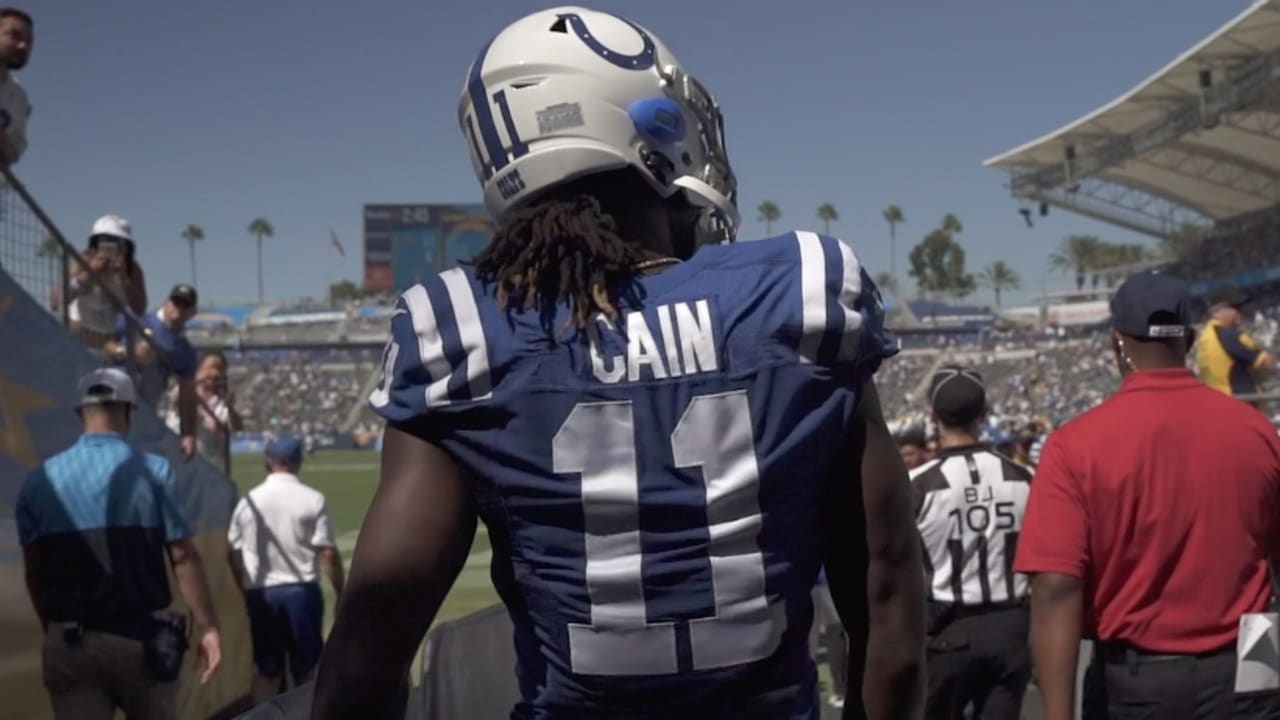 Here are some highlights from Episode 3:

» The episode gets started in the locker room before the Colts’ 2019 season opener against the Chargers in Carson, Calif., where Cain is getting ready for his official NFL debut. Thirteen months have passed since he suffered his torn ACL in the team’s first preseason game of 2018. “It’s been a long time,” Cain says. “Hours, days of me putting in a lot of work. I know where I wanna go, and I know what I wanna do in this league. And it starts now.”

» Then you’re taken back to this year’s training camp at Grand Park Sports Campus in Westfield, Ind., where Cain, wearing No. 11 on the first day of practice, tells the camera: “New numbers, new vibe — same game, though.” About to embark on his first official full-speed practice since suffering his torn ACL last year, Cain was confident but understandably needed a few days to get back to 100 percent. “I was so excited just to be out there, but it was also, like, ‘Alright, I’m still a little bit timid because I haven’t played this game in a long time,’” he said. “I had to get the feel of it. It maybe took me like a week or two. I had my rusty days, but I also had my good days.”

» You’re re-introduced to Colts wide receivers coach Kevin Patullo, who has been a tremendous resource for Cain since he was selected by the team in last year’s NFL Draft. “Ah, Patullo was a great help, man,” Cain said. “He was the main one that was helping me a lot. He didn’t want to rush me into anything. He always asked me, ‘Alright, how you feeling? Are you feeling good about this?’ He was just trying to work around everything I was feeling.”

» There’s a tremendous feel for how close the Colts’ wide receivers are on and off the field, but one really gets good sense of how close Cain and fellow second-year receiver Daurice Fountain have become. Both were 2018 draft picks for Indy, and both had rookie seasons that didn’t quite go as planned; Cain had his season-ending injury during the preseason, while Fountain spent most of the season working on his game on the Colts’ practice squad. “We were just trying to push each other, because he wanted to be on the field and I wanted to be on the field,” Cain said. The two were roommates at camp this year, and both worked off each other to turn in strong performances throughout their time at Westfield this year. “We talked about everything,” Cain said. “Just how we wanted to approach this camp, and just really wanted to put a statement to the fans, to ourselves, to our family like, ‘Yo, we could be part of this team, and we’re gonna help this team win games.’”

» Then comes the tough part. The Colts welcomed the Cleveland Browns for two days of joint practices to wrap up training camp, and on Aug. 15 — the final day of camp — Fountain goes down with a gruesome dislocated and fractured ankle. Like Cain one year prior, Fountain is the one who has been a summer standout who will be placed on injured reserve and sit out the entire season before it ever began. Cain walks up to check on his friend, who is surrounded by trainers and medical personnel on the field, and is overtaken with emotion. But Fountain later recalled that it was Cain and his fight back from his knee injury that was immediately on his mind after going down that day. “Man, I literally saw some of the highs of highs and lows of lows of Deon literally throughout his rehab process,” Fountain said. “But one thing I can remember, when I was on the ground screaming in pain that day, he came up and talked to me. He came right literally on the side of me. I was able to take one thing that he said to me; he said, ‘Man, you have to keep faith. Like, in your rehab and everything, keep faith. It’s gonna be tough days, but you have to keep faith. Believe — like, trust. Because you’re gonna get through this.’ And obviously you see what he’s doing now, so, like, I believe him.”

» “Faith is a big thing that I live by,” Cain said. “Me going through my injury and stuff, you’re gonna think about a lot of things. Believing in your rehab, believing in the trainers, believing in everything that someone is telling you to help you to get back to the same player I was, was really a key for me to tell (Fountain), because that’s what someone told me once I went through that whole phase. And I just wanted to reiterate the same thing to him.”

» The focus shifts back to Cain’s comeback trail, as he’s excelling in the Colts’ preseason games. In three preseason contests — he sat out the team’s finale against the Cincinnati Bengals — Cain has 12 receptions for 169 yards and a touchdown. The touchdown was a spectacular 46-yard catch and run against the Chicago Bears where he executed a nasty juke and turned on the burners to the end zone. “It felt so good just celebrating with my teammates again, man,” Cain said. “I just can’t go through the emotions. I just opened up my arms and just wanted to give it all to the man above, because I knew I wouldn’t be there without Him.”

» The episode wraps up back in California, where Cain is officially making his NFL debut. He’d go on to catch two passes for 35 yards in that game. He’s officially back. “It’s literally a relief for me, just to know that I made it to this standpoint,” Cain said. “I’m actually glad I took that step back, because it taught me a lot more about myself, and how can I apply myself to make myself better everyday in life and in football.”