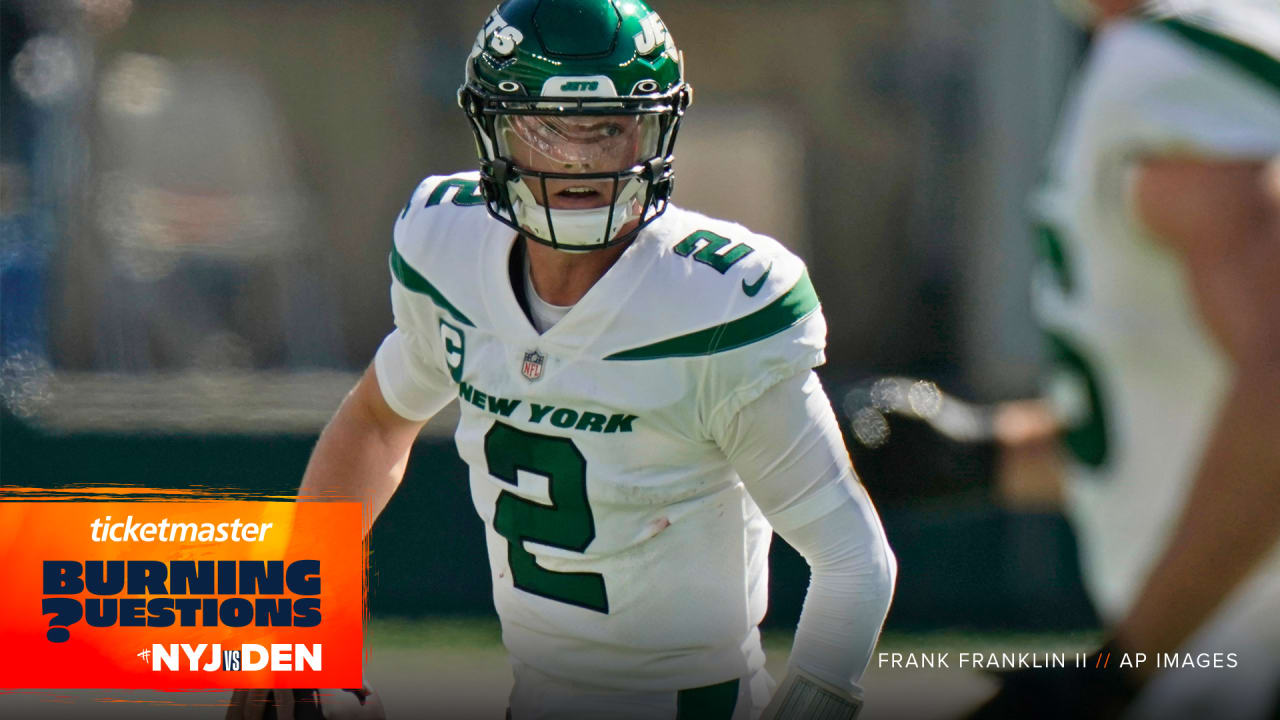 WILL THE BRONCOS’ OFFENSE KEEP ROLLING?

It would be hard for Teddy Bridgewater to have played much better during the season’s opening stretch. With his performance against the Jaguars, Bridgewater became just the fourth quarterback in NFL history to complete 75 percent of his passes for at least two touchdowns and zero interceptions in each of his first two games to start a season. If he can turn that type of performance in against the Jets, he’ll join Drew Brees as the only player to start a season with three such performances.

Bridgewater has excelled throwing the deep ball, working against the blitz, avoiding big hits and creating positive gains on broken-down plays. He also has yet to turn the ball over and has worked the ball to his host of weapons; Bridgewater completed passes to nine different players against the Jaguars.

Denver’s offense has been particularly strong right before and right after halftime. Against the Giants, Denver scored a touchdown on their final possession of the first half and then again after the break. New York went from a four-point lead to a 10-point deficit without touching the ball on a non-kneeldown possession. Then, last week, the Broncos scored late in the first half before again scoring a touchdown on their first drive of the second half.

“Those have been critical,” Fangio said Friday. “We were behind until the scores late in the half, and then to come out and top it off with another one is big.”

Perhaps the only area the Broncos haven’t thrived is on third down, where they went 2-of-11 against the Jaguars. New York’s third-ranked third-down defense could pose problems again, but the key to Denver’s improvement will come on first and second down. Seven of Denver’s 11 third-down attempts against Jacksonville were at least six yards. Of course, context is necessary, as well.

“I think the third-down thing is — every week you can cherry-pick something, and certainly, we need to do better of not having third-and-longs,” Shurmur said. “I do know this: Whether it’s third or fourth down, the goal is to stay on the field. We had two fourth downs we converted and then we had another third down that the people with the pencil don’t count where they had a penalty that kept us on the field. Fortunately, we had I think 22 or 23 first downs in total, so let’s get first downs on second down and not worry about it.”

Should Denver find the big plays and yardage it did against the Jaguars, the team’s third-down percentage may not matter. With moderate improvement, though, Denver’s offense may be able to put together its most complete game yet.

CAN THE BRONCOS’ SPECIAL TEAMS IMPROVE?

The Broncos’ Achilles heel through two weeks of the season has been their special teams coverage. Against the Giants, Denver allowed a 38-yard kick return and was also penalized 15 yards for unnecessary roughness on the play. A week later, Denver gave up a 102-yard kickoff return for a touchdown, which was the only score of the second half for the Jaguars. Through two weeks, the Broncos rank last in the league in opponent kickoff return average.

“What it comes down to is I’ve got do a better job of making sure they see every single thing during the week,” Special Teams Coordinator Tom McMahon said Friday. “It breaks down in execution, and when execution breaks down — whether it’s leverage, whether it’s a missed tackle, whether it’s any part of that play — that’s 100 percent on me.”

Denver has made a commitment to improving its special teams in several ways — by playing starters on the coverage units and making roster moves with special teams in mind — and they should get another boost from the addition of linebacker Micah Kiser. Fangio said the newly added linebacker will be active this weekend, and McMahon said he should “1000 percent” make an impact in Week 3.

“Mentally, everything you tell him — even though the language is different [where it’s] Spanish for us versus English for the Rams — he picks it up right away,” McMahon said of Kiser. “He was great in the meeting room. He was ready — to be completely upfront with you, I thought he was ready to play a game Thursday morning and he just got here on Wednesday. It’s a big compliment to him. He can shed blocks, he’s seen everything. All the situations that come up, it’s not new to him. The verbiage is different, but when it happens — there’s a task within every situation and he understands the task, which is the easy part for a coach.”

The Broncos’ special teams unit is not without its bright spots, as it ranks second in punt return average and firstin punt return average allowed. Kicker Brandon McManus has been solid, as well, as he’s made all 10 of his kicks. For Denver to be a complete team, though, it must find a way to work through its kickoff coverage issues.

Against the Giants and Jaguars, the lapses in kickoff coverage haven’t ruined the Broncos’ hopes of winning. As the season continues and games get tighter, though, Denver can’t afford to give up free yardage or points.

Tags: against down third