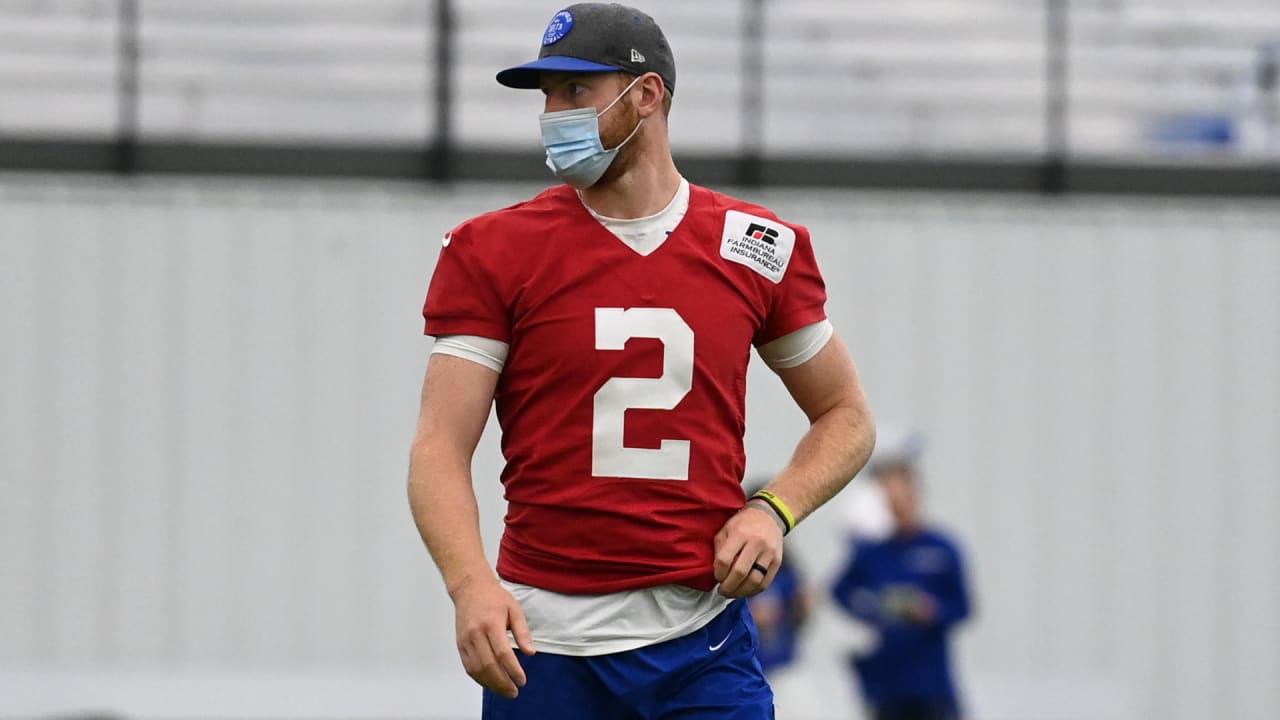 WESTFIELD, Ind. — After a Jacob Eason-to-Mike Strachan deep ball didn’t connect during Wednesday’s practice, Carson Wentz pulled Strachan over on the sideline to chat with the Colts’ rookie wide receiver.

And what’s noteworthy about that moment is, in a way, it hasn’t been a noteworthy observation since Wentz underwent a foot procedure two weeks ago. That’s because those conversations are happening so frequently between Wentz and his teammates or coaches during practice.

The Colts’ quarterback has been heavily involved — even if he’s not participating in practice — and has looked locked in to everything that’s happening on the fields in front of him at Grand Park.

“Carson was like, on the angle, you just need to come out of it a little bit higher because I need a little bit more space or hey, when you’re in that break, just take two more steps in that revolution, I’m not going to be ready to throw the ball,” coach Frank Reich relayed. “Or hey, just bring that out a little flatter — those are the side conversations that, when he’s not doing rehab, he’s out here on the field talking to them, talking to the O-line about checking things in the run game. That kind of thing is very valuable.”

Whether it’s talking to pass-catchers about details, or his linemen about checks, or his coaches about progressions, Wentz has been heavily engaged in the Colts’ practices. He has had an earpiece in, too which allows him to hear the feed that’s gone into the helmet of whichever quarterback is in during practice.

It’s another way Wentz is staying dialed to the mental reps he’s taking with the goal of being ready to play whenever he’s cleared.

“Jim Caldwell used to say that all the time to me with Peyton, that there was nobody better at putting himself in the moment than Peyton Manning, like feeling like you’re in the Super Bowl,” Reich said. “That even though you’re standing behind the line of scrimmage you’re not even in on the rep, do you have the ability to get a mental rep and make it feel like you’re in the game. Carson’s doing a good job of that.”

Wentz went through walkthroughs on Tuesday, Reich said, but there is not a timetable on when he’ll be cleared to do anything more than take mental reps yet.

“He’s getting very antsy. Very antsy,” Reich said. “He’s wanting to push the envelope, as I would expect. But he’s gotta be patient and just stay focused on the mental side of it right now and we gotta let things take their course. But at the same time, there’s a time to push things and we’ll keep doing that as it’s appropriate.”

Reich said the Colts will have a better idea of when Wentz’s availability when “we push it” and see how the quarterback responds. But the Colts don’t want to do that “too soon, too fast,” Reich added.

Most Starters Likely To Play In Minnesota; QB Plan For Detroit Coming Into Focus

Reich said he expects most — not all — of the Colts’ starters to see action in Saturday night’s preseason game against the Minnesota Vikings at U.S. Bank Stadium.

“There’s going to be a couple that don’t play,” Reich said. “Not many. But most of our starters will play.”

That does mean Sam Ehlinger, who will start on Saturday, will get a chance to play with other starters — an opportunity not afforded to Jacob Eason against the Carolina Panthers on Sunday. Reich said he’s planning on playing Eason, Ehlinger and Brett Hundley in the Colts’ preseason finale against the Detroit Lions, but admitted the reps with the starters will be “not equal” between Eason and Ehlinger.

“As a former backup I’ve faced a lot of those scenarios,” Reich said. “And there’s no way to make it get apples to apples. We just gotta use our best judgement, understand all the dynamics that are at place and you gotta make the best with what you have at that time.”

“The good thing is that it’s a hard decision. Both guys are doing well.” — Reich on evaluating Eason vs. Ehlinger