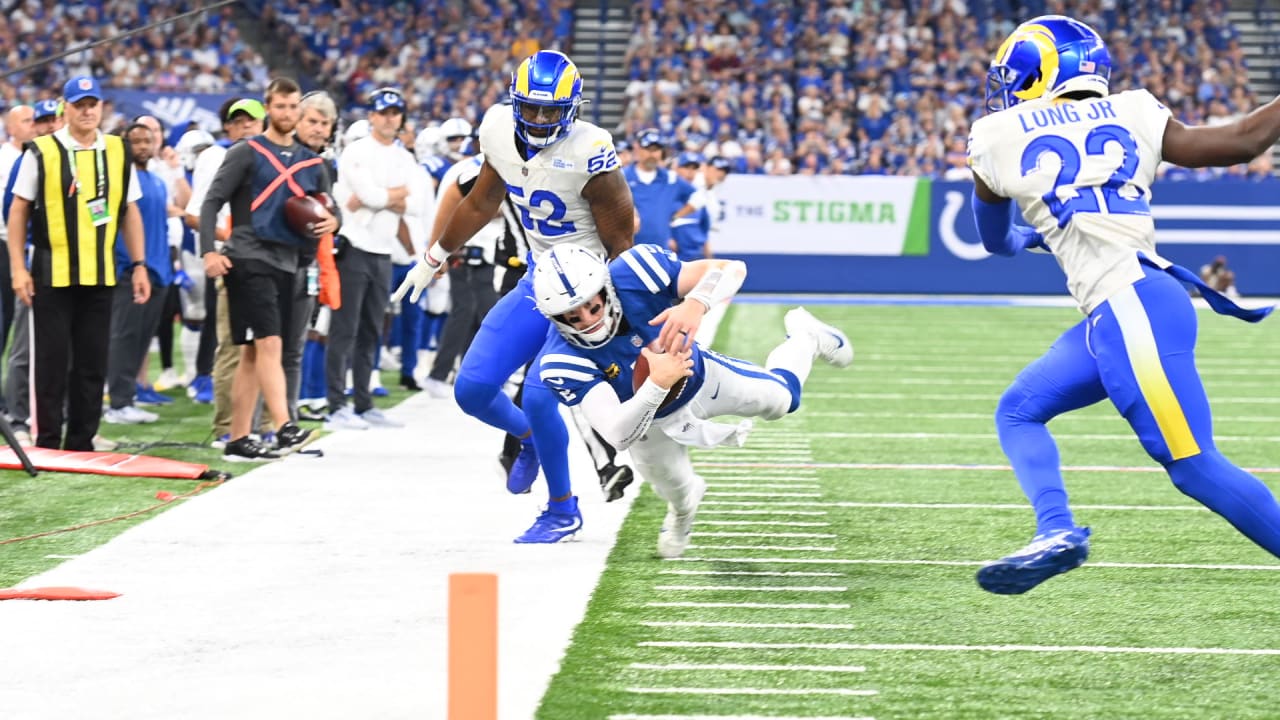 Carson Wentz played tough in the Colts’ 27-24 loss to the Los Angeles Rams on Sunday at Lucas Oil Stadium.

“Carson is one of the toughest guys that I know,” said wide receiver Michael Pittman Jr.

But Wentz suffered an ankle injury in the fourth quarter when Rams all-world defensive tackle Aaron Donald rolled up on him while the quarterback tried to make an acrobatic play to convert a third down. Wentz limped off the field and threw his helmet in frustration as soon as he got to the sideline, knowing the injury would likely mean his day was done.

Wentz, though, got with Colts trainers and did everything possible to get him on the field. All this went down as Rodrigo Blankenship hit a game-tying field goal, and then as the Rams countered by driving for what wound up being the game-winning field goal.

Wentz got his ankle taped up and tried going through some simulated, high-speed drop-backs on the sideline, but the injury was too severe for him to get back on the field.

Coach Frank Reich knows from experience how ankle injuries go, and how they can stiffen up to a point where gutting it out is not an option.

“He rolled it up pretty bad,” Reich said. “I had a sense when he walked off the field because I saw it, it didn’t look good.”

The injury gutted Wentz, who played a stellar game against a stout Rams defense and desperately wanted the chance to lead his team in a critical situation late in the fourth quarter.

“Part of you feels like you kind of let the team down, especially the way we were rallying and kind of had what felt like a little momentum there,” Wentz said. “I taped it up, I tried. There was not enough stability to get out there and go.”

Wentz completed 20 of 31 passes for 247 yards with a touchdown and an interception (which happened because Donald wrecked a play), and also scrambled five times for 37 yards. He was under a barrage of pressure — Wentz and Jacob Eason were pressured 19 times on 45 drop backs, per Pro Football Focus — with Donald a persistent menace and Leonard Floyd, Sebastian Joseph-Day and Greg Gaines all registering sacks.

For Wentz to do what he did in the face of that much disruption in front of him impressed his teammates, especially those on an offensive line that didn’t feel like it played up to its standard on Sunday.

“And for the pressure that I think we’ve let up up front, he’s done a pretty good job in my opinion so if we clean it up and we do our jobs, all the blockers, then we can have some big plays. We got talented guys on this offense, our wide receivers, running backs and everyone just do their job and we can light it up.”

There’s good reason for Nelson’s optimism there. The Colts generated five passing plays of 15 or more yards against a Rams defense that’s been the stingiest team in the league in allowing explosive plays over the last year. Entering Sunday, the Rams allowed 64 passing plays of 15+ yards in their last 17 games — good for about three or four per game. No team allowed fewer than 70.

Also: Three of those passes on Sunday went for 20+ yards (42 and 23 yards to Pittman, 34 yards to a wide-open Jack Doyle); the Rams entered Week 2 allowing about two of those passing plays per game since the start of the 2020 season. And the difference in one or two more explosive plays than normal is immense over the course of a game.

And on that 42-yarder to Pittman, Wentz showed how he can make plays even when things break down a bit. Facing a third and 14 and with Donald barreling toward him, Wentz used his arm strength to rifle a shot downfield, which Pittman worked back toward to make the play.

“I feel like that’s what makes him great is he can do that,” Pittman said. “He can run around, scramble and still heave it like 80 yards. The guy’s arm is crazy.”

And Wentz’s scrambling ability showed up a number of times, with two of his scrambles resulting in first downs and another getting the Colts into a third and short. Wentz’s toughness was evident against the Rams; coaches and teammates knew he was tough, but now they’ve seen it up close.

But now the process begins to see where Wentz’s ankle is going into Week 3’s divisional matchup against the Tennessee Titans. He said he’ll undergo scans on it Sunday night and will pray that his ankle will heal quickly, with the hope he can continue to build on what’s been an encouraging start to his Colts career against an AFC South rival next weekend.

And there’s no doubt that, if Wentz can play, he will.

“I’ve sprained my ankle 100 times, probably, since I was a kid,” Wentz said. “This one I just couldn’t play through at the end of the game. We’ll evaluate and do everything we can to get this thing ready to go for next week.”