COSTA MESA, Calif. — The Los Angeles Chargers have a history of securing big-bodied receivers who stretch the field vertically and go up for contested catches from prolific passer Philip Rivers.

Vincent Jackson, Malcom Floyd and Tyrell Williams are just a few who have fit the prototype over the years, and the Chargers believe that Mike Williams is the latest of that mold.

“We joke about it all the time — just put it around him,” Chargers backup quarterback Cardale Jones said of Williams. “His catch radius is unreal, and his ability to control his body in the air is pretty sweet. He leaves a lot of room for error for us because he can make up for a bad pass or a pass that maybe shouldn’t go to him.”

Even though draft observers questioned it in the lead-up to the 2017 NFL draft, what makes Williams unique among his receiver prototype is his speed. The Chargers clocked Williams, 6-foot-5 and 220 pounds, at 4.52 seconds in the 40-yard dash during his pre-draft workout for the team.

“I ain’t going to lie. I was one of those guys [who initially doubted Williams’ speed],” Chargers safety Adrian Phillips said. “I knew he could run, but when you see those knees starting to get high, and they’re coming at your head — man. Mike’s already 6-[foot]-5, but when he picks those knees up, he starts flying. Mike is really fast.”

After struggling through an injury-plagued rookie season in 2017, Williams fulfilled his first-round promise last season. He finished with 43 receptions for 664 receiving yards and a team-high 10 receiving touchdowns.

With Tyrell Williams signing with the Oakland Raiders in free agency, the Clemson product will be counted on to help fill the void as a deep threat opposite No. 1 receiver Keenan Allen.

“To me, he’s never really covered,” Rivers said. “Obviously, you don’t just throw it up all of the time. The percentages aren’t in your favor all of the time, but he has such a catch radius, and he’s so big. When most guys might look covered and you see him, you go, ‘Well, maybe he has a chance.’

“I’ve grown used to that over the years with some of the receivers we’ve had here in the past. He’s similar to those guys in that aspect of going up and making catches. … He’s going to be a big part of what we do.”

Asked whom he would compare Williams to of the receivers he has had in the past, Rivers said the third-year receiver is a combination of Jackson and Floyd. 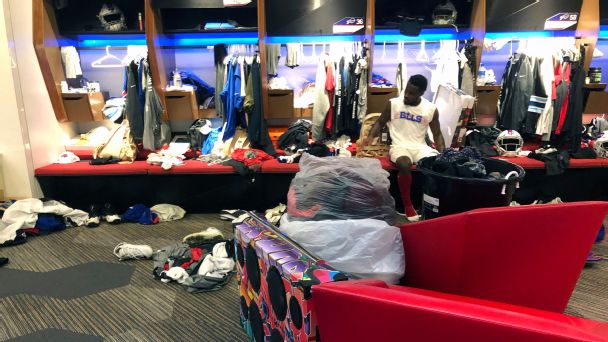 • What it’s REALLY like to be cut in NFL
• Evaluating the Lions: A quarter with the GM
• Rams’ Peters not locked in on contract
• Williams latest jump-ball WR for Rivers
• Potential breakout players for all 32 teams

“He reminds of both them with the different things he does,” Rivers said. “Mike is his own guy, so to say who’s he more like, I don’t think I can do that. His size and build is probably more like Vincent, just his power. But his ability to go up and high-point the ball is more like Malcom. He has a mixture of both of them.”

Williams has a chance to develop into a go-to receiver for Rivers and the Chargers. According to ESPN Stats & Information, Rivers threw for 10 touchdowns and just one interception when targeting Williams last season, the third-best touchdown-to-interception ratio for a quarterback/receiver duo that combined for 10 touchdowns last season. Only Aaron Rodgers–Davante Adams and Russell Wilson–Tyler Lockett were better.

Also, per ESPN Stats & Info, Rivers was 15-of-26 for 389 passing yards and three touchdowns when targeting Williams at least 15 yards downfield.

Williams, who played all 16 games last season after missing six games as rookie, said that staying out of the training room again is his No. 1 priority.

“That’s the main thing — to be healthy throughout the whole season, be available — and I feel like the rest will happen,” Williams said. “With me being a wide receiver, I feel like my availability is the best for me. I feel like, if I’m out there, I’m going to make plays for the team, so [my goal is] just to be available.”

Tags: he his williams

Mel Kiper Jr.’s ‘other’ NFL draft QBs who could…