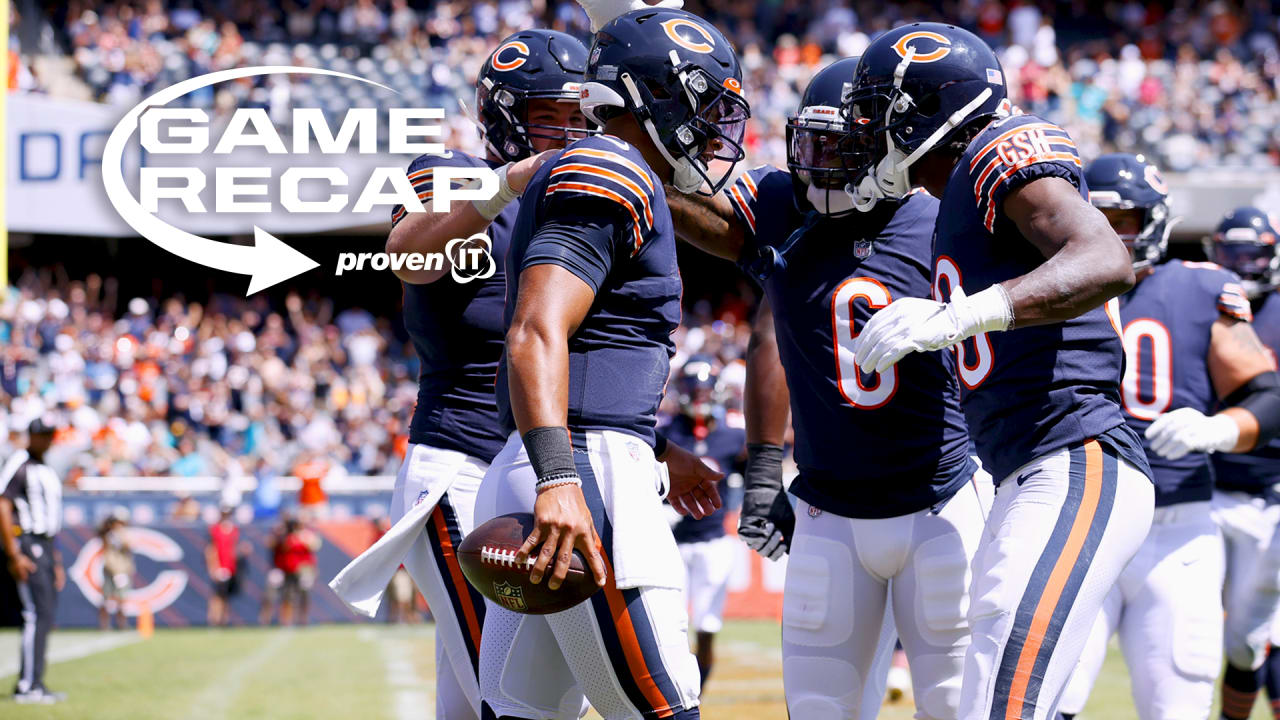 Fields played six series in the second and third quarters, completing 14 of 20 passes for 142 yards with one touchdown and a 106.7 passer rating and rushing for 33 yards and one TD on five attempts.

The Bears offensive line did an excellent job throughout the game, enabling the offense to find its groove after a sluggish start.

The Bears defense allowed only one touchdown and produced two takeaways.

The Dolphins took a 3-0 lead on Jason Sanders’ 21-yard field goal with 8:08 left in the first quarter. The key play on Miami’s 7-play, 60-yard drive was Tua Tagovailoa’s 50-yard pass to tight end Mike Gesicki, who beat linebacker ﻿Alec Ogletree﻿. Three plays later, Ogletree redeemed himself by dropping running back Malcolm Brown for a two-yard loss on third-and-goal from the 1.

On their next possession, the Dolphins reached the Bears’ 14. But safety ﻿DeAndre Houston-Carson﻿ thwarted the drive by stepping in front of tight end Adam Shaheen and intercepting Tagovailia’s pass over the middle one yard deep in the end zone.

Fields then entered the game with 12:11 left in the second quarter. The highly-touted first-round pick completed his only two passes for 10 yards on his first drive, but the Bears went three-and-out in large part because Javon Wims and Elijah Wilkinson drew back-to-back false start penalties.

The Dolphins increased their lead to 6-0 on Sanders’ 35-yard field goal with 4:23 left in the second quarter. Miami settled for the kick after nickel back ﻿Duke Shelley﻿ broke up a pass intended for receiver Robert Foster on third-and-four from the 17.

After the Bears’ fifth straight third-and-out to start the game, Miami scored the first touchdown on Jacoby Brissett’s 23-yard pass to running back Salvon Ahmed down the right sideline, beating linebacker ﻿Caleb Johnson﻿ with :45 left in the half.

Fields followed by completing 5 of 6 passes for 42 yards, setting up Santos’ 53-yard field goal as time expired in the first half, drawing the Bears to within 13-3.

Fields showed his tremendous athleticism on the Bears’ first drive of the second half, fending off a tackler in the pocket and sprinting around left end for an 8-yard touchdown, cutting the deficit to 13-10 with 9:45 remaining in the third quarter.

Fields continued to shine on the Bears’ next possession. He showed his blazing speed on a 21-yard dash and then lofted a 30-yard touchdown pass to a wide open James, who caught the ball at the 5 and backpedaled into the end zone, giving the Bears a 17-13 lead with 3:52 left in the third quarter.

Fields was removed from the game in favor of ﻿Nick Foles﻿ early in the fourth quarter.

Backup kicker ﻿Brian Johnson﻿ later booted a 44-yard field goal, widening the Bears’ lead to 20-13 with 4:18 remaining in the game.