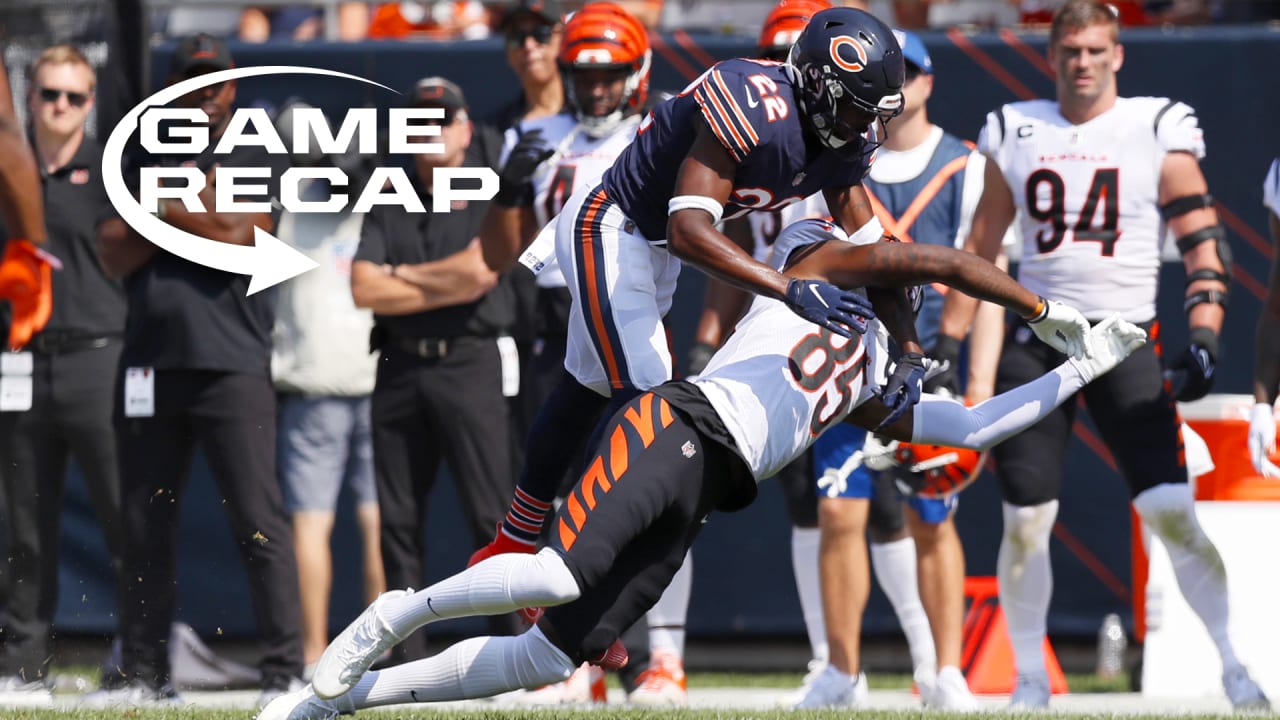 The Bears then followed with three straight interceptions of Joe Burrow. ﻿Roquan Smith﻿ returned the first one 53 yards for a touchdown, widening the margin to 17-3. They eventually made it 20-3 before the Bengals closed the gap to 20-17.

Offensively, ﻿Justin Fields﻿ replaced an injured ﻿Andy Dalton﻿ in the second quarter. Fields completed 6/13 passes for 60 yards and rushed for 31 yards on 10 attempts.

The Bears took a 7-0 lead on the game’s opening possession on Dalton’s 11-yard touchdown strike to Allen Robinson on third-and-5, capping a 9-play, 75-yard drive. Dalton completed 6 of 7 passes for 39 yards, and the Bears were 3-of-3 on third down. The biggest chunk came on a 32-yard pass interference penalty against cornerback Eli Apple on third-and-12 from the Cincinnati 48.

On the Bengals’ first possession, the Bears had seemingly forced a punt when receiver Ja’Marr Chase was unable to hang onto Joe Burrow’s pass over the middle on third-and-5. But Gipson stood over Chase and clapped, drawing a 15-yard taunting penalty that gave Cincinnati a first down.

The Bengals reached the Bears’ 35. But on third-and-10, Robert Quinn sacked Burrow for an eight-yard loss, knocking Cincinnati out of field goal range.

On the Bears’ second possession, Fields made his first appearance of the game on the final two plays of the first quarter. He threw a pass to ﻿Marquise Goodwin﻿ that was broken up and then handed off to ﻿David Montgomery﻿.

Dalton scrambled for 11 and 14 yards on the first two plays of the second quarter. He suffered a knee injury on the second run and was replaced by Fields for the rest of the possession. The Bears turned the ball over on downs when Fields was stopped for no gain on fourth-and-1 from the Cincinnati 32.

Dalton returned for the Bears’ next drive but then exited and did not return.

The Bengals cut the deficit to 7-3 on Evan McPherson’s 53-yard field goal on the opening possession of the second half.

On the Bears’ first drive of the third quarter, Fields was sacked and fumbled on third down. Linebacker Logan Wilson attempted to scoop up the ball, but Fields batted it away from him and recovered the loose ball.

The Bears defense followed by generating its first takeaway of the season as Jackson stripped the ball from Higgins after a completion over the middle and Gipson returned the fumble 13 yards to the Bengals’ 39.

The Bears converted the takeaway into ﻿Cairo Santos﻿’ 28-yard field goal, increasing their lead to 10-7 early in the fourth quarter. Fields sustained the drive with a 13-yard completion to Robinson on third-and-12 and followed by connecting with Mooney for 21 yards on the next play.

The Bears defense followed with a second straight takeaway as Smith intercepted a Burrow pass over the middle and returned it 53 yards for a TD, widening the margin to 17-3 with 10:55 left in the fourth quarter. Smith broke a tackle attempt by Mixon and followed ﻿Kindle Vildor﻿ and ﻿Alec Ogletree﻿ down the left sideline.

Two plays later, the defense struck again as ﻿Jaylon Johnson﻿ recorded his first career interception, stepping in front of Higgins at the Bengals’ 36.

Then it was ﻿Angelo Blackson﻿’s turn. He intercepted a Burrow pass that was deflected by Ogletree deep in Bengals territory. Santos followed with a 22-yard field goal, giving the Bears a seemingly safe 20-3 lead.

Fields was then intercepted by Wilson, who returned the pick 18 yards to the Bears’ 7. On the next play, Burrow rifled a 7-yard TD pass to Higgins, making it 20-17 with 3:39 to play.

But that was as close as the Bengals would get. The Bears picked up three first downs on their final drive to run out the clock and improve to 1-1.