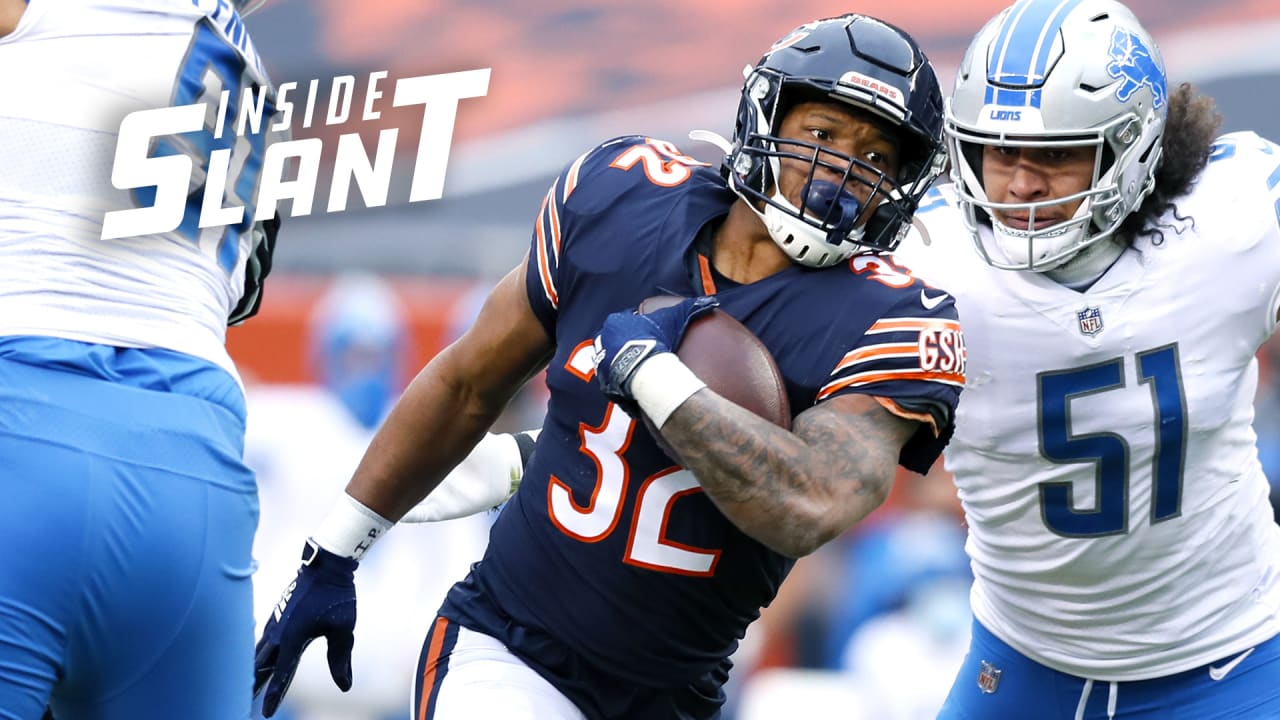 After snapping a seven-game streak of sub-100-yard rushing performances against the Green Bay Packers last week, the Bears continued to hone their running game against the Lions.

David Montgomery finished with 73 yards and two touchdowns on 17 carries. Cordarrelle Patterson had one of his best performances since arriving in Chicago last season, rushing for 59 yards and a touchdown on 10 carries.

The newfound running game seemed to take pressure off the passing game, as Mitchell Trubisky turned the highest passer rating of any Bears quarterback this season.

“I thought our offense was efficient today,” said Trubisky. “I thought we did a good job of mixing up the run with the pass, I thought we were balanced, I thought the O-line did a great job with protecting and establishing the run game. I thought our backs, David and CP, ran their tails off.”

Trubisky’s presence as the starter seems to be one factor in the increased ground production. In the five games that Trubisky has started this season, the Bears have rushed for an average of 135 yards. In the seven starts by Nick Foles, the team averaged 52.6.

Trubisky’s ability as a running threat himself, as well as his relative comfort under center, seems to benefit Montgomery and Patterson.

The balance also comes as the Bears used the same offensive line configuration for the second week in a row. Former college teammates Sam Mustipher and Alex Bars held their own at center and guard, respectively. Cody Whitehair and Germain Ifedi returned to the positions they were drafted to play, guard and tackle, respectively, without seeing a drop off in performance.

The past two games have shown an offense closer to the one with which the Bears began the year, heavy on called runs and play-actions. However, the running game was more effective than it has been all season, with its three touchdowns against the Lions eclipsing its total in all 11 other games this season (2).

The Bears were able to jump on the Lions early with their rushing attack, gaining 64 yards in the first quarter, higher than their total in six games this season. The team’s first touchdown drive went 71 yards in six plays, five of which were runs.

The drive culminated in a 13-yard off-tackle run that culminated with Montgomery reaching the ball over the pylon. The play was Montgomery’s longest rush of the day.

“I just saw green grass,” said Montgomery, “so I just dived and scored.”

Had the Bears maintained their success on the ground, which gave them 106 yards and three touchdowns in the first half, the team might have enjoyed their first victory since mid-October. Instead, the Lions adjusted and held the Bears to 34 yards on 12 attempts in the second half.

“You’ve just got to try to take what they give you,” said Montgomery. “They did a pretty good job stopping the run, doing a lot of Mike [linebacker] run-throughs in the second half, so kudos to them for that.”

Montgomery may be on track to better his rushing total from his rookie season when he finished with 889 yards and six touchdowns. So far this season, he has raised his yards-per-carry from 3.7 to 4.1. Montgomery is hopeful that his recent upturn in production will continue over the final four games of the season.

“Just staying together,” said Montgomery, “just sticking with it, trusting that God is in charge of the path, which He is, and just go out there and have fun and try to play more and more and more for my brothers.”