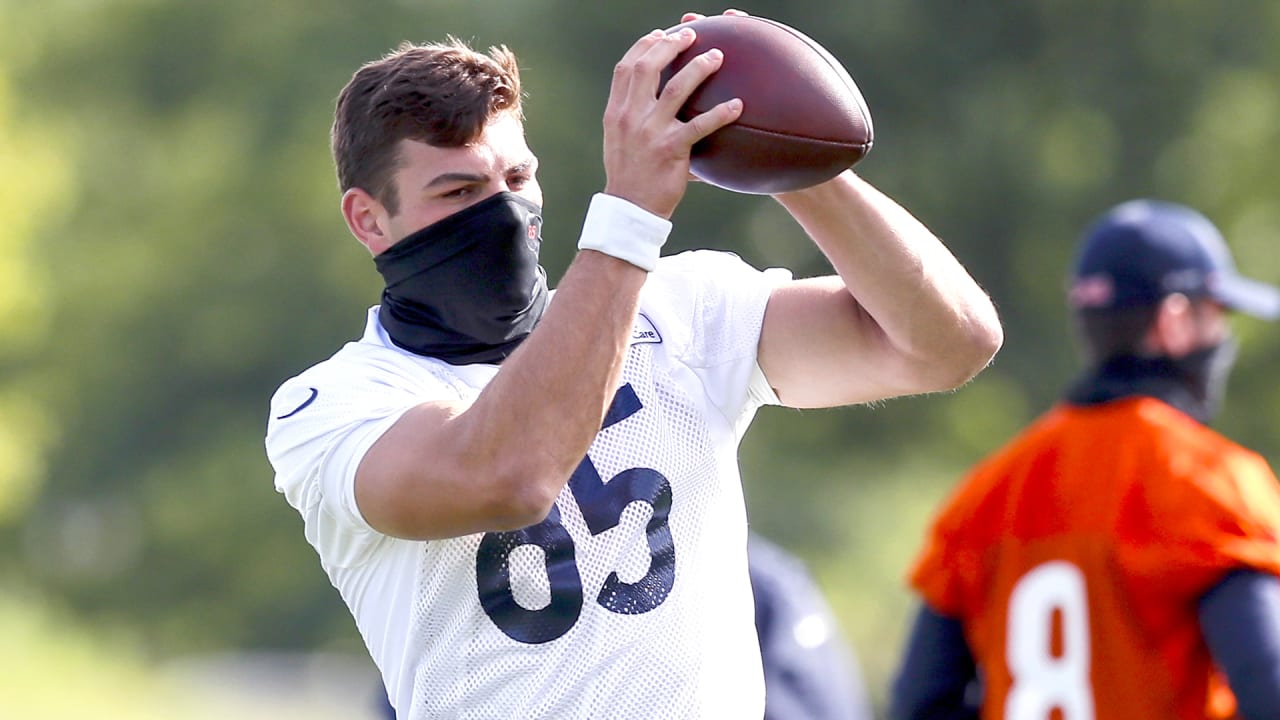 Kmet’s first steps inside Halas Hall were even more memorable for him because he grew up in the Chicago area rooting for the Bears, and his father, Frank, was a lineman on the team’s practice squad in 1993.

“It was pretty amazing, pretty surreal,” Kmet said. “You dream about that as a kid, being able to play for the hometown team. And then being able to actually go into the practice facility and see your locker was pretty special and really cool for me.”

With all OTA and minicamp practices cancelled due to the coronavirus, the Bears conducted their offseason program entirely on a virtual basis. Kmet proved to be a quick study, drawing praise from coach Matt Nagy.

“I have yet to trump him in a Zoom meeting on a question,” Nagy said in May. “I can’t trick him. He knows it all … I will guarantee you he will know this playbook inside out. That’s not going to be an issue.”

Kmet revealed that his key to quickly gaining a grasp of the offense involved “being a good listener and taking good notes” during meetings and then studying on his own—with the aid of a whiteboard in his bedroom in his family’s Arlington Heights home.

“I would write out a script for myself and then draw up the whole concept so I knew what everyone was doing on the play, whether that was the running back, the wide receivers, the right guard, the center, what calls had to be made,” Kmet said. “I tried to get as much of the big picture as I could so that would help me out.”

Kmet would then work with his younger brother, Casey, a pitcher on Notre Dame’s baseball team who’s entering his sophomore year in South Bend.

“He’d quiz me on some stuff and we’d go outside and do a mock walk-through,” Kmet said. “Between the whiteboard and my brother, those were two things that helped me out a lot.”

Ever since Bears veterans reported to Halas Hall last Tuesday, Kmet has also been soaking up knowledge from two experienced tight ends. Jimmy Graham is a five-time Pro Bowler, while Demetrius Harris spent his first four NFL seasons with the Chiefs working with Nagy in an offense that’s similar to the one the Bears currently operate.

“Jimmy Graham and Demetrius Harris have really helped me a lot,” Kmet said. “Listening to those guys and listening to the coaches has been really beneficial.”

“He’s been awesome to me,” Kmet said. “He’s helped me out a lot. It’s pretty cool being around a guy like that who’s been in the league as long as he’s been, and obviously he knows a lot and has seen a lot. So any knowledge that I can get from him is going to be a huge benefit for me. He’s been more than willing to help me, and I’m really excited to get going and continue learning from him throughout the season.”

With rookies finally permitted to do some on-field work, Kmet is starting to get the chance to apply what he’s learned in Zoom meetings. But more difficult tests loom with the Bears set to hold their first non-contact practice Friday and their first padded workout next Monday.

“In terms of translating to the field, we’ve had our walk-throughs recently, so I’ve been able to execute it during the walk-throughs,” Kmet said. “But we’ll have to see how it goes once we get the pads on and we start playing real football. I’m pretty confident that I’ll be able to translate well, but you really don’t know until you get out there and really do it.”

Once practices begin, Kmet hopes to show coaches that the physicality he displayed at Notre Dame translates to the NFL, he moves well for his size, and he possesses the ability to line up both as an inline blocker and also split out wide as a receiver.

“Being able to do those things and just be assignment-sound is something that I really want to show,” said Kmet, a 6-6, 262-pounder who caught 43 passes for 515 yards and six touchdowns last season at Notre Dame.

“The first thing that strikes you with the Zoom meetings is that he’s a very quick study,” Barone said. “The guy’s very bright, which we also knew from the combine and all the research we did on him before the draft. But then when you actually get to see him [in person], he certainly looks the part. He’s as big as advertised. He’s in tremendous condition, very lean. He’s a big, thick-bodied guy and extremely athletic.”

Tags: his kmet was