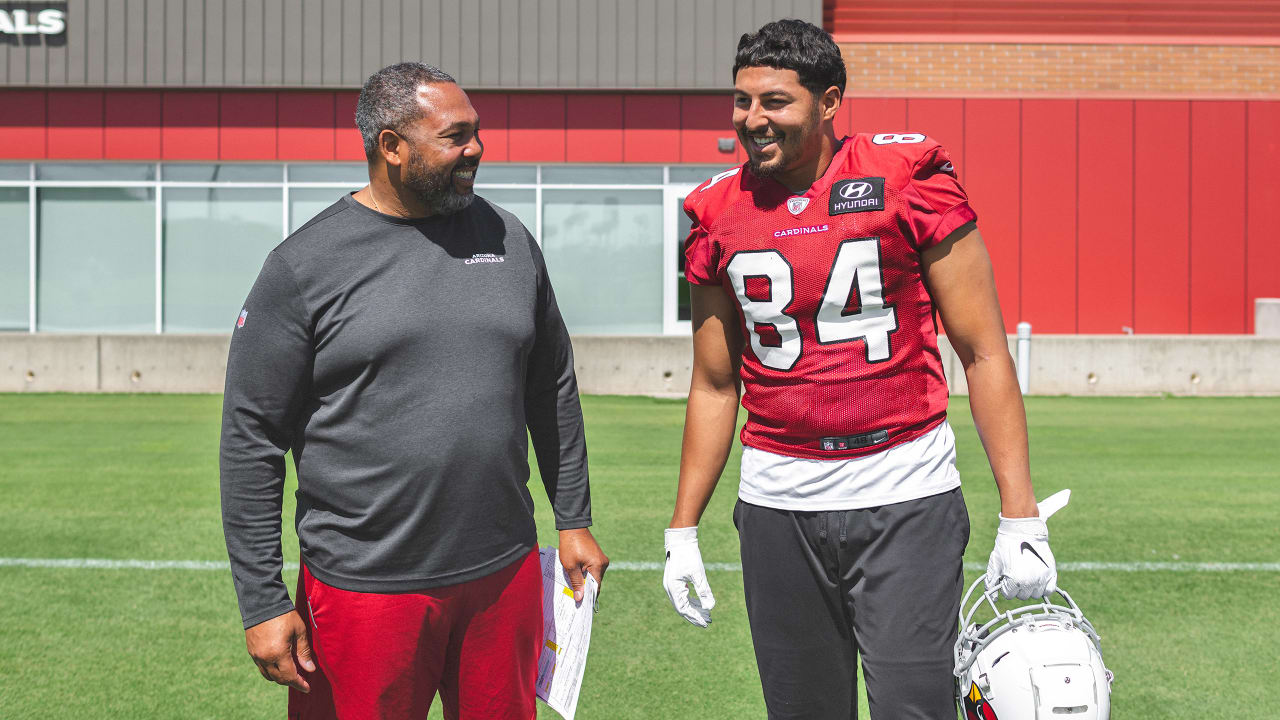 Chris said he still isn’t sure why he wasn’t retained but emphasized the respect he has for the Philadelphia organization and its decision-makers – “Sometimes, it’s just your turn” – and used the opportunity to visit various teams with which he had connections. He spent time with the Rams, Raiders, 49ers and Cowboys during his summer tour, and then arrived in Arizona because of a long-standing friendship with defensive coordinator Vance Joseph.

Joseph, who worked with Chris at the University of Colorado in 2002-03, saw a chance to add a coach with experience, even in the short term. Caleb saw a chance to be around family while he figured out the NFL.

“It’s been awesome,” Caleb said. “Obviously he’s my dad, but he’s one of my closest friends. I confide in him with anything.”

They might be on opposite sides of the ball, but Chris has advice he can provide. Chris was a one-time 12th-round draft pick – the last round of the draft in his day – of the Bears in 1992, so he understands the uphill climb Caleb faced. As a coach with NFL experience, he also knows how to deal with players who are fighting for roster spots.

“(The draft) was long, just like it was for me in ’92,” Chris said. “But we had a plan, and the biggest thing was getting him an opportunity. I shared with Caleb on those long days, ‘You just need a shot. Once we walk in that door, you go make plays and you can make the roster.’ That’s kind of been his mantra.”

Caleb said he’s happy his dad has landed a full-time job in Arizona. Now he’s just trying to make sure he can stick around with him.

“He always tells me keep improving,” Caleb said. “He had to prove his worth, just like I have to prove my worth. We both have talents we’re trying to bring to the Cardinals organization.

“Of course I get nervous, of course I think about things. But at the end of the day, I have to do a job.”

When Caleb was a freshman in college, he walked on at USC (later transferring to UCLA). During a scrimmage between the scout team and the Trojans defense, with Chris serving as a defensive coach for USC, Caleb caught a touchdown from fellow scout-teamer Sam Darnold.

The defensive staff wasn’t happy, but family comes first — on video later, Caleb said you could see Chris post-TD giving a quick fist pump. Those touchdown catches, whether in practice or in a preseason game, still matter to dad.

“We are both living our dreams,” Chris said. “We just happen to be doing it together.”