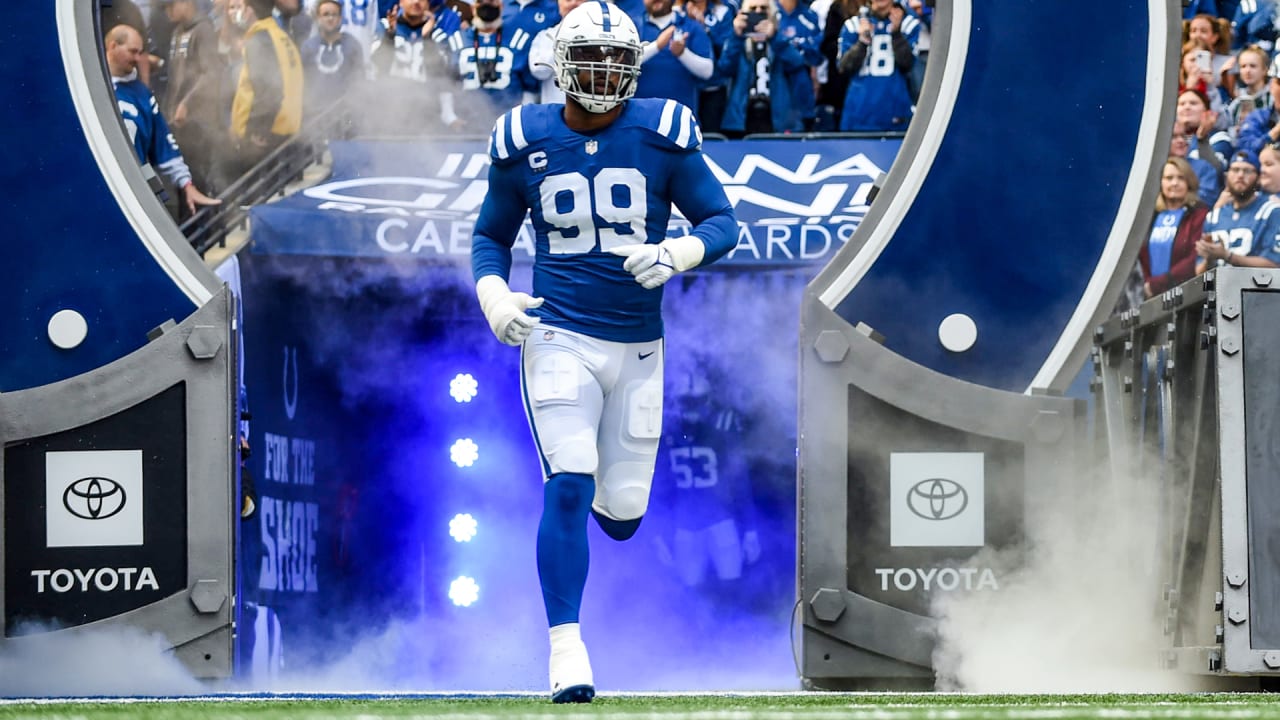 And all that disruption and production has come despite opposing teams doing plenty to make sure No. 99 doesn’t beat them.

“He’s getting double-teamed all the time,” head coach Frank Reich said. “I mean against the Jets, they were always sliding the line to him or chipping him or putting an extra guy on him.

“You know how well he’s playing based on how other teams game plan against him.”

An example of what Reich is talking about: In Week 3, the Tennessee Titans ran a play-action fake to Derrick Henry on second and goal from the Colts’ six-yard line. Henry, after taking the fake, was tasked with helping right guard Nate Davis against Buckner. Buckner used his right arm to drive Davis back toward Ryan Tannehill, forcing the Titans’ quarterback to start rolling to his right. Buckner powerfully used his left arm to dis-engage with Davis and step toward Tannehill, forcing a throw-away.

Having a back help or chip Buckner is designed to allow a guard take away Buckner’s inside moves knowing he has help to his outside shoulder. A lot of the time, though, offenses will slide protection toward Buckner to allow a center and guard to double-team him, leaving him with little space to operate.

“He’s going to get some attention because obviously, he’s a wrecker in there,” defensive coordinator Matt Eberflus said. “The biggest thing we tell him is to not get frustrated, to just keep working and that’s what he does.”

There are counter-moves and strategies Buckner will use when he’s double teamed or chipped. It starts with identifying when those slides and chips are coming – a skill at which Buckner is particularly adept, especially after picking things up during the first series he’s on the field.

One of those strategies, then, is wrapping around the other defensive tackle in Eberflus’ 4-3 scheme – with that tackle going inside, allowing Buckner to wrap around him to shed the double team. Another is doing whatever he can to push the pocket, even with 675 pounds of human doing what they can to limit his impact.

“Really gotta play with extension,” Buckner said. “If the guard is over-setting on the slide then I can come underneath and power the center and really just focus on him and powering back with extension, knowing the guard’s probably not going to come off, and continue to push the pocket, close the pocket on (the quarterback).”

This is the product of how good Buckner is — because when you leave him singled one-on-one against a center or guard, the 2020 first-team All-Pro can use his swim move to blow past the guy in front of him and envelop the opposing quarterback. His first sack of 2021 came in Week 1 against the Seahawks on a third and six, with the Colts shifting their line pre-snap so Buckner was head-up on the center and beat him to bring down Russell Wilson.