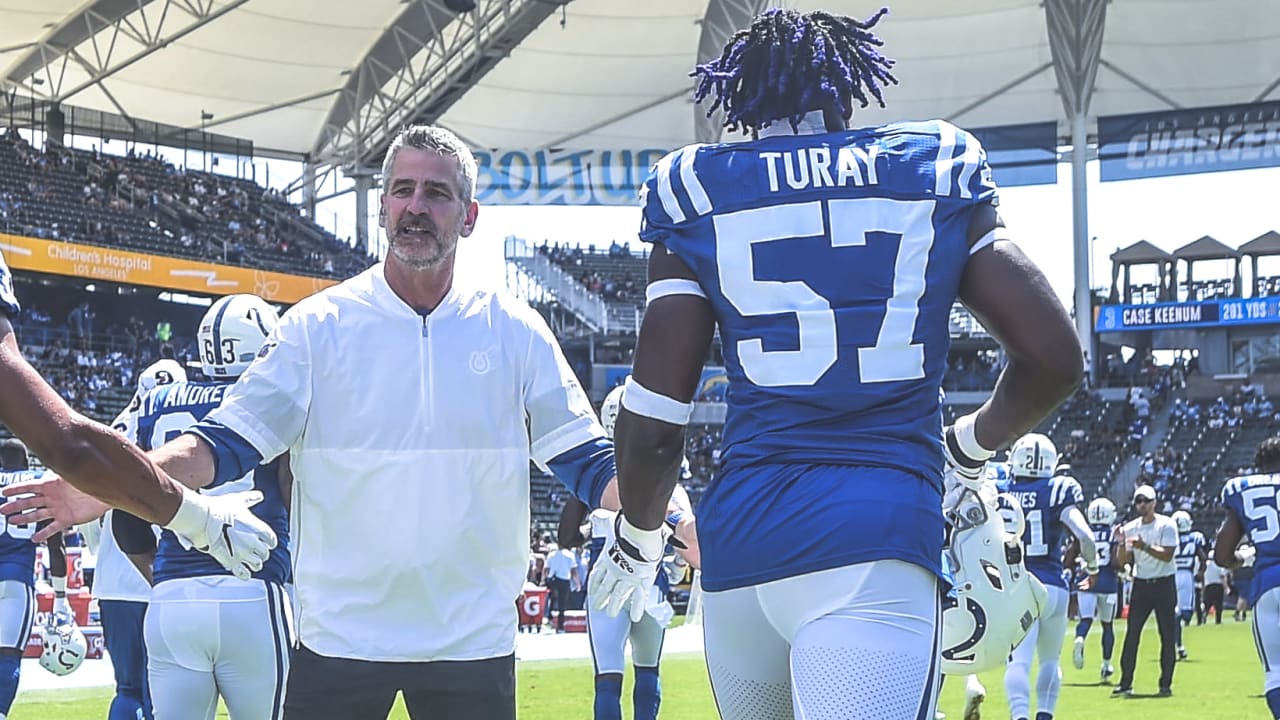 » Kemoko Turay will likely need a couple weeks of practice before he can potentially return from the Physically Unable to Perform (PUP) list: Turay suffered a brutal ankle injury in the Colts’ Week 5 road win over the Kansas City Chiefs last season, and after undergoing surgery and working his way through the recovery process, he entered the season on the PUP list, which requires him to sit out at least the first six games of the year.

Technically, Turay could return to game action as soon as this Sunday’s Week 8 matchup on the road against the Detroit Lions, but Reich said today that the edge rusher will likely require at least a couple weeks of practice under him before he can return to game action.

“Regardless of how that plays out, the plan will be, ‘Hey, we gotta practice this guy a couple weeks before we do anything,'” Reich said. “I mean, he’s gonna have to prove he can do it out on the practice field first before we think about putting him back on in a game.”

“He’s making progress. I think he’s making good progress,” Reich continued, when asked if Turay could possibly return to practice this week. “We just want to make sure we continue to make the progress that we (need) the next couple of days.”

The 25-year-old Rutgers product, who was selected by the Colts in the second round of the 2018 NFL Draft, was off to a terrific start last season, and at the time of his injury was tied with the Pittsburgh Steelers’ T.J. Watt as Pro Football Focus’ highest-graded edge defender in the NFL (91.3), while his pass-rush grade of 91.0 trailed only Watt and the Cleveland Browns’ Myles Garrett.

Reich today said he’s excited about the unique skillset that Turay will bring if and when he’s able to return to the lineup this season.

“Everybody at this level bends well, but then there’s guys that have a little bit extra bend for their size and strength, and Kemoko’s one of those guys,” Reich said. “When you have that as a pass rusher, the dynamic is, ‘Hey, the tackle, he’s pass-setting on you, you’re already off the ball; with your great speed you’re already putting the tackle in a difficult position,’ but then that ability to bend is really what gets you past the tackle’s hips, because it’s all about, as a pass rusher, as a speed pass rusher, it’s about getting your hips past the tackles’ hips and having the speed and bend to be able to do that. And we think Kemoko has those traits, and he’s shown that, and we’re anxious to get him back out there when we can, and if we can.”

» The Colts’ offense really focused on its zone-running schemes during the bye week: The bye week provides all teams across the league a unique opportunity to take a look back at what’s been working through the first few weeks of the season, and, of course, what needs to be improved. For the Colts’ offense, Reich said the run game — and more specifically, the zone-running schemes — was the focus last Wednesday before the players were able to get away for a few days.

The Colts currently rank last in the league with a 3.6 yards-per-carry average, and Reich attributes that figure to a variety of factors, some of which were situational from week to week, and others in which the Indy offense simply was running into some heavy boxes.

“In a lot of ways we were encouraged as far as at the point of the attack,” Reich said of the Colts’ zone-running plays from the first six weeks of the season. “As far as our execution and how the offensive line is performing at those combination blocks, we felt like it was pretty good.

“There are different ways that we as an offense try to address those things,” Reich continued. “Yeah, there are some things we definitely need to work on, but I felt like we were encouraged. We’ve just got to keep calling it, and get in the right situations to keep calling it.”

Asked if the run game remains the identity of the Colts’ offensive gameplan from week to week, Reich said, “No question.”