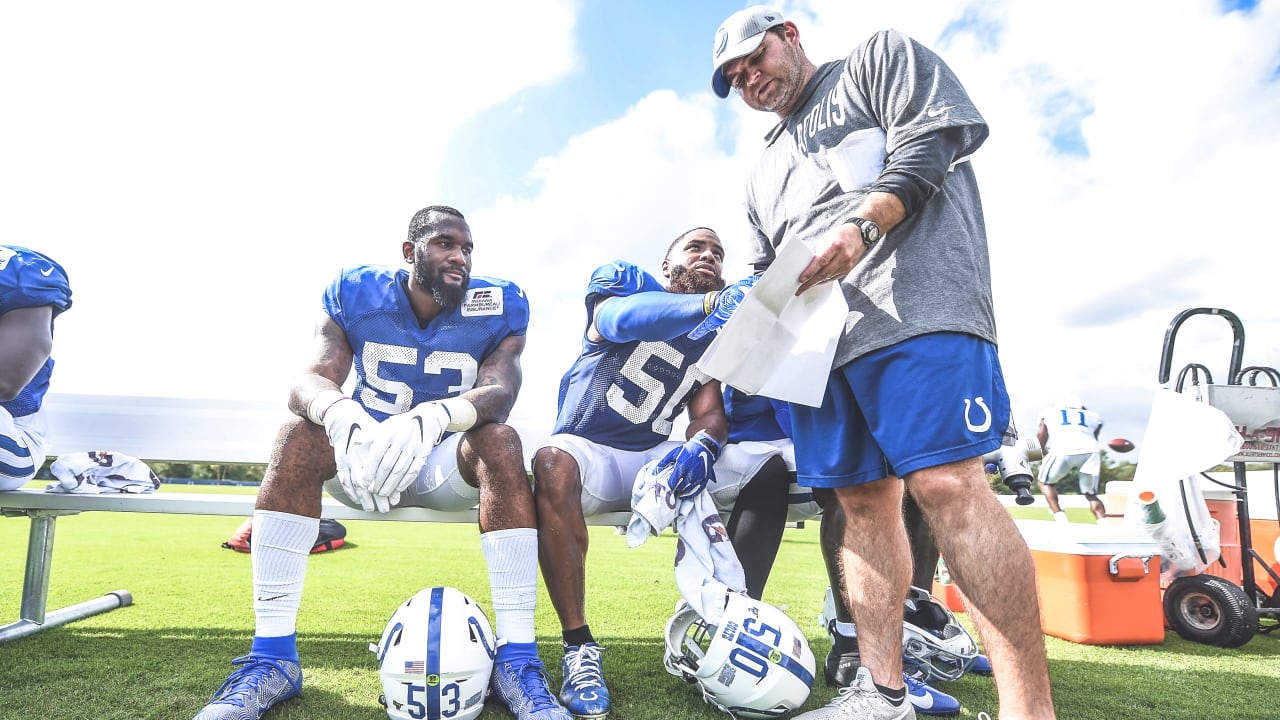 Just starting out, talking about the events that have been surrounding the nation of late, how important has it been for you to hear some of the stories coming out of the room from the players and coaches and how racism has affected them?

Borgonzi: “Yeah, it was really tough to hear because you hear the pain in their voice and the things that they’ve had to endure, and it’s like when your kids hurt, when your players hurt, you love these guys and you feel for them. So it was tough to hear the guys talk and just talk about what they’ve had to endure in their lifetime and we’re trying our best to help them and do whatever we can to help their movement.”

I know you as a coach with your players and a resident in this community, it goes beyond football. Do you think you’ll always remember those meetings specifically and the impact they’ve had on the team?

Borgonzi: “Yeah. I think Frank (Reich), Coach Frank, just the way he structured the meetings where he created an open forum for anybody to speak whether it’s a player, a coach, (the) personnel side, anybody that had something on their mind. And I spoke, a number of coaches spoke and obviously a lot of the players spoke. So it was an environment where Coach Frank set it up where people felt comfortable talking. And I think it was important for us to listen, but also share. And for me, I wanted to really listen because I needed to learn more.”

Getting to football, how do you watch the game? Not as a coach, but if it’s a Monday night game, a Sunday night game, maybe you’re in the hotel on a Saturday night before an away game. Do you watch linebacker play or how the defense is set up? Can you watch as a fan?

Borgonzi: “You know what? When I watch it — it’s funny you ask that — as a football coach when you watch film, you watch coach copy films. So when you watch a play, you see it from the wide angle and then from the tight angle. When you see it on TV, it’s more of a tight picture. So it’s a different way to view it because the viewing angle is different when you watch it on TV. What I like to do is when I watch it, I look at formations, and the TV copies, you can hear things you can hear audibles, you can hear quarterback cadence. So I like to look for those things when I watch the game on TV. And also we can intercut the TV copy into our coaches copy. So you can watch the coach All-22 film and then intercut cut it with the TV copy. So you can get some really good things out of it. It’s just a different vantage point to see the game with the TV copy; (you have) instant replay. So there’s some little things that you can catch on a TV copy that you might not see on the All-22.”

So the answer is yes, you do watch it a little bit differently than fans do — which is understandable — and you can break down a play defensively based on the broadcast?

Borgonzi: “Right, right. I’ll be honest with you, sometimes it’s harder to see on the TV copy because you can’t see the back end as much. When I said the back end, like the safety rotation or how the corners are playing it. The TV copy a lot of times you could just see the front seven, the offensive line backs, D-line; you can’t really see the corner, how they’re playing it or the safety’s rotation. So there’s little things in the TV copy that you can’t see as well, but there’s certainly some things that you can get a beat on”

We all saw the improvement in Darius Leonard from Year 1 to Year 2. What do you expect from Year 2 to Year 3, and going back a couple years, when did you know this guy was an elite talent at linebacker?

Borgonzi: “That’s a good question. For Darius, he just continued to improve his play strength, getting stronger. Part of that is just having a whole offseason. His rookie year, he was hurt in the offseason, so he didn’t have an offseason. And then last year he missed the offseason because he was injured early in the offseason. So just having a full offseason where he can continue to get stronger, I think that’s really going to help him. When did I know Darius was elite? Like I said, he missed a whole offseason his rookie year. So he really wasn’t on the field for us in May and June. His very first practice that year was in a training camp in 2018 and he made this unbelievable interception the very first practice. And you could tell that wasn’t. … a normal guy in the NFL doesn’t make that type of play. So we knew right away that he had freakish athletic ability. And sometimes what you don’t know when you draft a guy is just how much they love and watch football, and Darius from Day 1 worked really hard at it, had a great attitude. So everybody sees his athletic ability and how gifted he is, but the way he works at it is also special.”

And your linebackers as a group — Leonard, Bobby Okereke, Anthony Walker included — how much of an impact can having a dominating presence up front like DeForest Buckner have for your guys?

Borgonzi: “I think obviously having a dominant player up front is going to help everybody. I hadn’t been around DeForest a lot, just in these virtual meetings, but I do know a few coaches with the 49ers and I could see already just in the Zoom meetings, just the leadership too, that he’s going to bring to us as a defensive player is going to be great. And in the run game, he’s an enormous man, so he’s going to be great in run defense. He brings a certainly an element to pass rush to us. So he’s going to really help the linebackers both in the run and the pass game.”

With Bobby Okereke, what are the expectations from Year 1 to Year 2?

Borgonzi: “Yeah, we expect big things from Bobby. He came in as a rookie and did a really nice job. Like Darius, Bobby is a guy that has great physical attributes, but also more importantly, he works really hard at it. So we expect Bobby to make a big jump from Year 1 to Year 2, just in his production, his plays on the ball, interceptions, game-changing plays. Bobby has a lot of ability and we expect him to really have a great season this coming year.”

And with Anthony Walker, this guy just exudes leadership. He’s getting dirty on every play, leading the way — how important has he been?

Borgonzi: “Anthony is a great teammate. The first thing (is) he’s an unbelievable leader. He’s a leader of the defense. He’s very smart. He’s a guy that can play multiple positions for us. He can play MIKE, he can play WILL, he can play SAM, so his versatility is unmatched. Everybody in the locker room respects him just because of how hard he works, both on and off the field. So he’s really a true leader of our defense.”

I want to talk about another guy in your linebacker room, E.J. Speed, who didn’t get a ton of opportunities his rookie year, but he sure looks the part. What has been your impression of Speed?

Borgonzi: “Yeah, E.J. is an interesting guy because physically you’re not going to find a guy that’s better than E.J., just in terms of size, speed. E.J. loves football. He loves to play. E.J. just needs to continue to develop. He’s from a small college, played offense in high school, played offense early in college. So just being a linebacker is relatively new to E.J. So we’re working really from the ground up and E.J.’s working really hard. He’s committed to football. He wants to be a really good player in this league, so the sky’s the limit for E.J.”

Borgonzi: “We take a lot of pride in our run game. The No. 1 thing Coach (Matt) Eberflus talks about every week is stop the run. So we take a lot of pride in obviously stopping the pass too, but I think our guys love playing downhill and playing smashmouth football. I think they’d rather play a tough physical team than more of a finesse style team. Because our guys are tough.”

Borgonzi: “Yeah., it’s going to be unique for these guys just because they haven’t had any practice in the offseason. So just as something as simple as just what we do in individual, our drills: teach them what we do, and we’ve showed video of what we do for drills every day in practice — but actually going on the field and walking through those drills and practicing those drills. So when we work with the vets in practice, they have an understanding of how to do the drills. And just continue to reinforce practice expectations, how hard we practice and how hard we go. And we grade every play and practice with loafs. And then obviously the football side of it, which these Zoom meetings have been really good because we have been able to teach our foundation and our philosophy our defense. So they will come into camp with a basic understanding of what we do on defense. It’s just going to be the more physical part of refining how we do individual and there’s different movements we haven’t been able to work together on the field.”

This season is really coming up quick. And you have a lot of new faces to work with defensively to add to a really talented group of returners. What do you expect out of this defense as a whole this year?

Borgonzi: “Yeah, I’m excited. Obviously DeForest was a big addition, Xavier Rhodes and then just guys having another year under their belt, like Bobby Okereke, Darius Leonard, Anthony Walker, just another year in the system where every year they’re taking steps because their knowledge of our defensive system, it just gets greater and greater the more games you play. So I’m really excited. I hate to put a number on it. You’d like to say, ‘We’re going to be the best defense of the NFL,’ but you improve every week. So for right now, we just want to have a great practice the first day of training camp and then just go from there and take it step by step. But I’m definitely excited, Chris Ballard and Coach Frank and Coach Eberflus, we put together a really good defense and now we’ve just got to do it. We got to prove it.”

I’m going to leave you with this: it’s November, early December, and you’re driving to the Colts’ facility. It’s 5:30 in the morning — what does Dave Borgonzi listen to in the car on the way to work?

I personally put a bet on this, that you had Metallica on just getting ready for the day.

Borgonzi: “Yeah, that was probably, like, late ’90s, I’d go Metallica. But since then, the flame doesn’t burn that hot in the mornings right now. I just like to ease into the day and just listen to football talk or it could be something political, whatever it is. Just mix it up a little bit.”