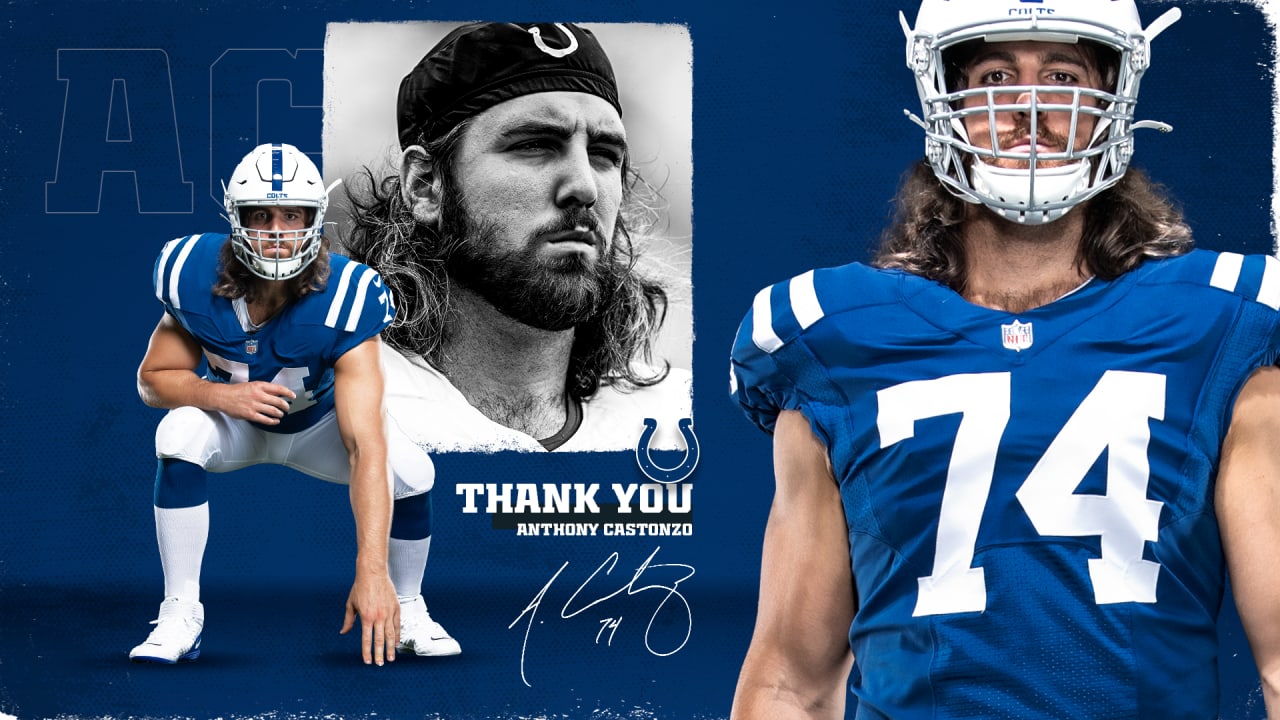 INDIANAPOLIS – Indianapolis Colts tackle Anthony Castonzo announced today his retirement from the NFL. The 10-year veteran started all 144 career regular season games and eight postseason contests he appeared in with the Colts since being selected by the team in the first round (22nd overall) of the 2011 NFL Draft.

“As a kid, it was my dream to play in the NFL. I played my first full season of tackle football in second grade. Now I have played my last. As I sit here now, after a 10 year NFL career, I am extremely proud of all the hard work and sacrifice that allowed me to evolve that dream into a goal, and ultimately into a reality unlike anything I could have even imagined.

More than anything, I want to thank everyone who supported me along the way, especially those who believed in me during times when I did not believe in myself. So thank you to the GMs who believed in me. Thank you to all the coaches who have taught me so much in my 25 total years of football. Thank you to the fans who are so dedicated to the game we all love. Thank you to my teammates who have become friends and those who I now call brothers. Thank you to all the strength coaches, trainers, and medical staff who gave me the blueprint to build (and sometimes rebuild) myself into the best player I could be. Thanks to all the support staff who helped make my daily work experience a joyous one. And thank you to my family who is every one of these things and so much more.

I was fortunate to have been drafted by the Colts ten years ago. I was even more fortunate to spend my entire career here in Indianapolis. The Indianapolis Colts is a special organization with special ownership who fill the organization with special people at every level. I truly believe this is the best organization in all of sports. I am lucky to have been able to call myself a Colt for the past ten years and will consider myself a Colt for the rest of my life.

I have given much to the game of football, but it has given me so much more. I close the book on the football chapter of my life gifted with memories and moments I wouldn’t trade for anything. So thank you, last but far from least, to football.”

“The Colts have been blessed with many talented offensive linemen throughout our rich history and Anthony Castonzo is among the best to represent the Horseshoe. For 10 seasons, Anthony consistently handled premier pass rushers at one of the toughest positions to play. He quickly developed into the leader of our offensive line and set a standard for preparation, strength and conditioning, and play. Anthony deserves a tremendous amount of credit for helping our offensive line mature into one of the best units in the NFL. He will sorely be missed, but we are so appreciative of AC’s contribution to our organization and we congratulate him on a fantastic career.”

“Anthony was a pillar of this team for the last 10 seasons. He played one of the toughest positions in the game at an extremely high level for a long time. Anthony was a veteran leader in our locker room and will be greatly missed. We’re thankful for all of his contributions to the Horseshoe. We love AC and know he will thrive in the next stage of his life.”

“I was an assistant coach with the Colts when Anthony was selected in the first round of the 2011 NFL Draft. From day one, I knew he would be a special player. Anthony has a brilliant mind and he was a technician both on the field and in film study. He is a tremendous leader who put as much energy in making his teammates better as he did improving his own game. I’m thankful for the opportunity to watch him grow as a professional from the start of his career to the end. I wish him the best in his post-football career.”

In 2020, Castonzo started 12 games and was part of an offensive line that tied for the second-fewest sacks allowed (21.0). The Colts registered four games this season without allowing a sack, which tied for the fourth-most in the NFL. The offense also ranked in the top-10 in the league in points per game (28.2, ninth), rushes of 10-plus yards (64, sixth) and first downs per game (22.8, tied-10th). Castonzo helped pave the way for running back Jonathan Taylor, who became just the fifth rookie in franchise history to reach 1,000 rushing yards in a single season. Taylor finished third in the NFL in rushing yards (1,169) and scrimmage yards (1,468) this season.

In 2019, Castonzo started all 16 games for the sixth time in his career. He was part of the only offensive line in the NFL to start the same five offensive linemen in all 16 regular season games. The group tied for the ninth-fewest sacks allowed (32.0) in the league. Castonzo helped the Colts register a top-10 rushing attack for the first time since 2001 as the team boasted the league’s seventh-ranked rushing offense (133.1 yards per game). Indianapolis’ 4.52 yards per carry average was the fifth-highest single-season total in franchise history. Additionally, Colts running back Marlon Mack (1,091 rushing yards) became the first Indianapolis player to register a 1,000-yard rushing season since 2016.