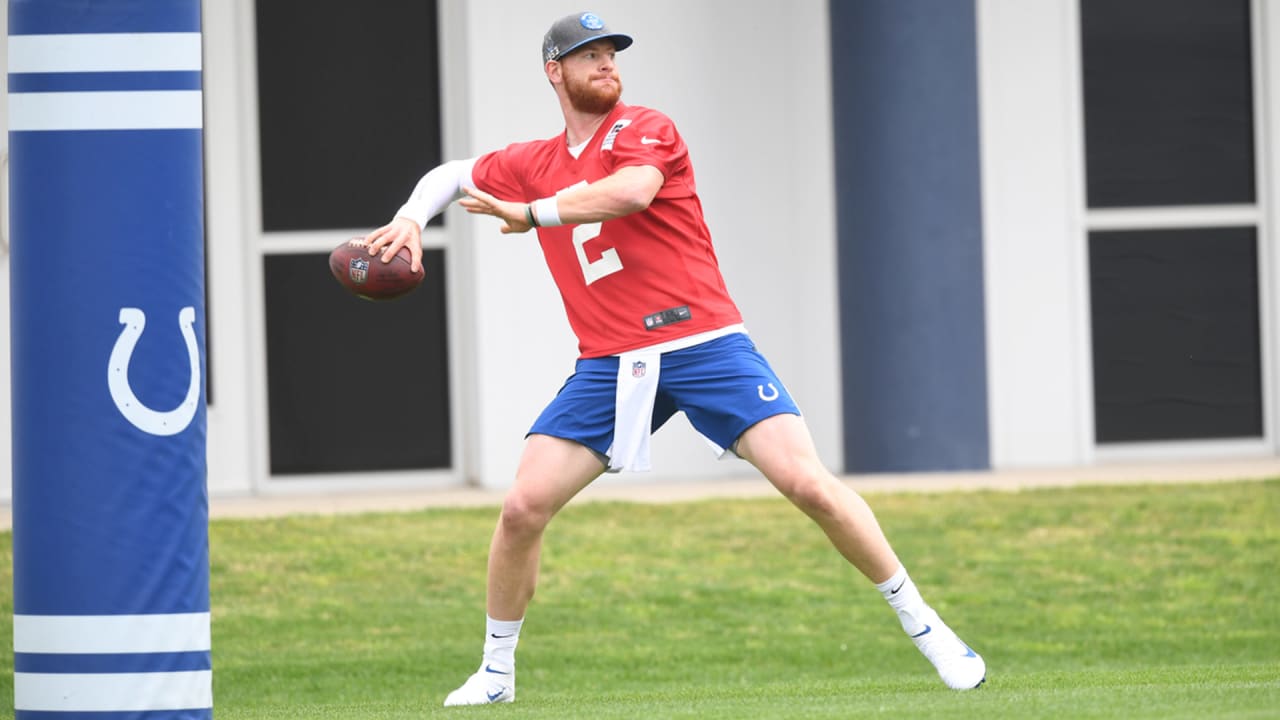 INDIANAPOLIS — Let’s start with a few observations from Thursday’s practice:

— Quarterback Carson Wentz has thrown to his receivers/tight ends/running backs away from Colts HQ for a few months now. But the timing and ball tracking work he’s getting with those guys — which coaches can coach off — will be valuable for building a foundation ahead of training camp.

— Here’s what wide receiver T.Y. Hilton said about his early impression of Wentz: “Just a lot of timing, a lot of chemistry. (His throws were) on the money. He has a big arm, likes to throw it, so just excited. It’s fun. It’s going to be special.”

— While left tackle Eric Fisher and Odeyingbo aren’t practicing yet — both suffered Achilles’ injuries in January — they were present and engaged with their teammates.

— There wasn’t a ton to report in terms of highlights or notable moments with the way these practices are designed, but the work the Colts are putting in right now is nonetheless important.

“We get to see guys, we get to talk to them, we get to go over the playbook, understand how each other moves and just go over a lot of things,” Hilton said. “The most important thing is just getting the playbook down, understanding it, familiarizing with it and running routes.”

Linebacker Darius Leonard got his first in-person look at Paye this week and came away impressed with the No. 21 overall pick in the NFL Draft.

“Watching him play, he’s everything that we need,” Leonard said. “That motor, that meanness, that toughness. He’s a very humble guy. I like to refer to him as like a DeForest Buckner — he’s quiet but once he steps on the field, that switch is switched.

“He has his drive to him. You see his story, his story is very, very strong. He wants to provide, he wants to prove everybody wrong, and those are the types of players that you need. You don’t need guys that come in and say okay, I made it, they want to be in the public eye. I just want guys that are going to come in and be a dog. When the time’s in the fourth quarter and we need a takeaway or we need to get off the field, we need guys that say okay, I’m going to make a play.

Speaking of Leonard, he’s taking on a greater leadership role with linebacker Anthony Walker now a member of the Cleveland Browns. Leonard, of course, has been instrumental in establishing the standard set by the Colts’ defense over the last few years, but still feels like he can grow his game entering Year 4 in the NFL.

“Just learning the defense to a whole other level and just being that leader, that leader that everybody needs,” Leonard said. “Now that Anthony Walker is gone, you need that person to take in that leadership role and say, ‘Okay, this is what you have to do. This is the way that is has to be.’ And continue to just be me, I don’t think I have to change much, I just have to continue to go out each day, work day in and day out, bring the energy day in and day out and let the rookies and everybody else (know) this is the standard and this is what it is supposed to be.”

And having so many talented players at defensive line coach Brian Baker and defensive coordinator Matt Eberflus’ disposal looks like an important aspect of the Colts’ defense in 2021.

“It’s definitely going to help us a lot being able to rotate, keeping guys fresh and having that depth and the trust in everybody’s ability to keep things rolling,” Buckner said. “That’s why, times like this, having these two weeks with each other, obviously we have new guys in the room and being able to gain that trust moving forward is going to be key. When I know I need a breather, I need to come out, I know the play won’t drop. I trust the guy behind me, he’s going to be playing just as hard, making just as big of an impact. It’s definitely going to go a long way for us, especially this season.”

Cornerback Kenny Moore and cornerbacks coach James Rowe are on the same team for the first time since 2016, when Moore was a senior at D-II Valdosta State and Rowe was the Blazers’ defensive coordinator. Moore talked this week about what kind of coach and person Rowe is.

“He’s a great guy,” Moore said. “I think moreso beyond coaching, he’s a great person to learn from. I like the way he carries himself. I think the coaching comes easy for him. He’s able to see what we see on the field. It’s great to have him in the room, it’s great to be back together again.”

— Quenton Nelson would’ve moved to tackle if asked, but it never got to that point – and the Colts didn’t want it to.

— Jonathan Taylor explained what’s next for him in Year 2.

— The Colts’ entire 2021 draft class is now under contract.

One more from Leonard, who explained what’s next for the Colts’ defense in 2021.

“Once you’re in the system for over two to three years, you can do more,” Leonard said. “Everybody knows what we run. There’s not sugarcoating anything. We are going to line up, we are going to run what we run and now that we are confident having veteran players on the defensive side of the ball, we can change things up, we can disguise more.

“To be a championship defense, we have to stop shooting ourselves in the foot. You have to know the playbook. You can’t have the mental mistakes. If you look at the games that we lost, it wasn’t anything that the opposing team was doing. It was more so what we were doing to ourselves – having missed assignments or mental errors or getting dumb penalties. Those are things that we can’t do. Once we clean all that up, we will be a championship defense.”