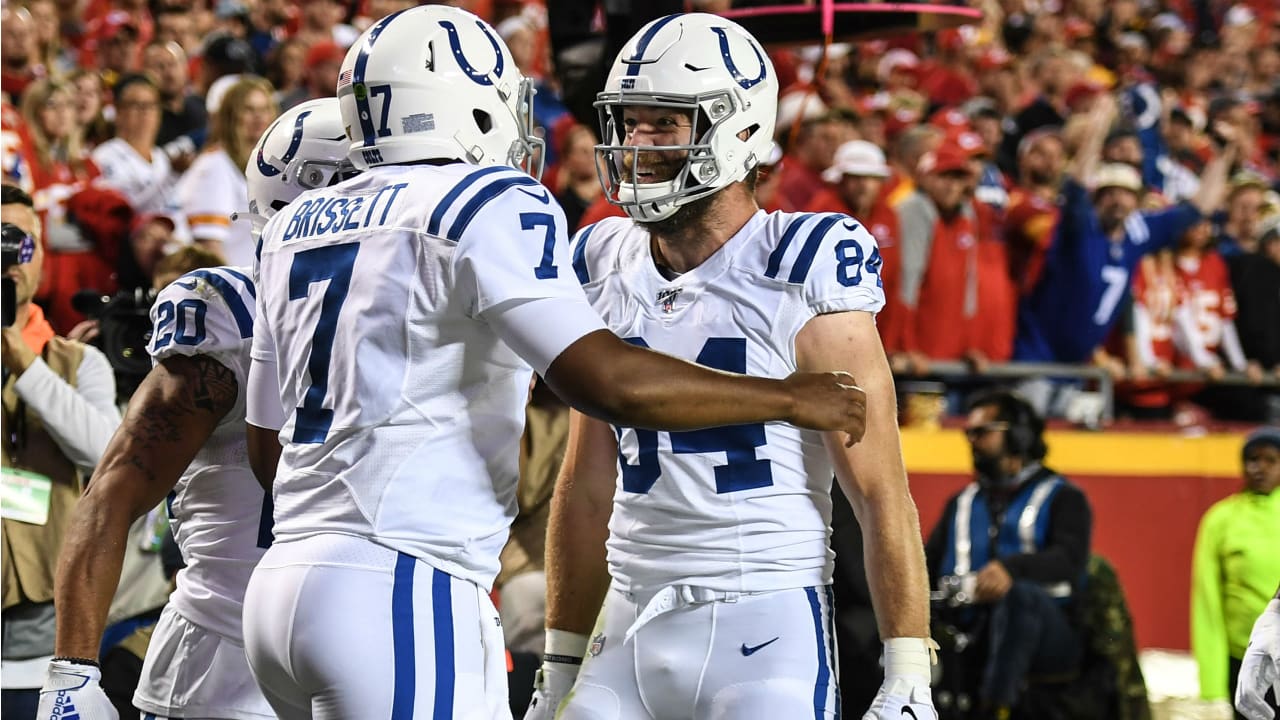 LOOKING BACK BEFORE LOOKING AHEAD

Many questioned what the Colts’ offense would look like after Andrew Luck retired in August. While the explosive component has yet to develop, the passing game has still been efficient. As mentioned, Brissett was tied for the league lead in touchdown passes going into Week 5 and entered Week 6 tied for the third-most with Tom Brady of the New England Patriots and Carson Wentz of the Philadelphia Eagles. Through four games, Brissett was the only player in the league with multiple passing touchdowns in each game before the streak broke last week. He is also among the least-sacked passers, ranks in the top half of the league in completion percentage and has completed a pass to 12 different receivers.

The Colts have been reliant on their entire receiving corps, as T.Y. Hilton missed a game-and-a-half with a quad injury, and Devin Funchess has been out with a collarbone injury since Week 1. Without their top two receivers, guys like Deon Cain, Parris Campbell, Zach Pascal and Chester Rogers have had to step up and have done nice job as a group. Unfortunately, Campbell suffered an abdominal injury in Week 4 and could miss a little time after undergoing a procedure for the injury. The tight ends and running backs — particularly Jack Doyle, Eric Ebron and Nyheim Hines — have stepped up in a big way as pass-catchers, as they account for 50 percent of Brissett’s completions and 72.2 percent of his targets.

The offensive line and running backs have powered the Colts’ offense to this point, as they currently rank fifth in the NFL in rushing (142.0 YPG), and Marlon Mack is also fifth in the league in rushing, individually. According to Pro Football Focus, all five of the Colts’ starting offensive linemen — Quenton Nelson (No. 2), Anthony Castonzo (No. 11), Braden Smith (No. 20), Ryan Kelly (No. 41) and Mark Glowinski (tied-No. 50) — rank among the top-50 overall offensive linemen in run blocking, which has paved the way for three games with at least 100 rushing yards including 203 yards in Week 1.

The Colts have some room for improvement in pass defense, but their performance against Kansas City shows the best is yet to come. You also have to account for the fact that rookies Rock Ya-Sin (238 snaps), Khari Willis (197 snaps) and Bobby Okereke (180 snaps) have all played significant snaps while Ben Banogu (67 snaps), E.J. Speed (31 snaps), Shakial Taylor (12 snaps) and Marvell Tell III (three snaps) have all seen action as well. The Colts have dealt with injuries to both starting safeties Clayton Geathers and Malik Hooker as well as All-Pro linebacker Darius Leonard whose absences have absolutely affected things against the pass. However, with the bye week here and guys getting some rest, things are looking up.

Week 5 was a big step in the right direction for the Colts’ run defense. Prior to that game, the Colts had given up an average of 132.5 yards per game on the ground, including three of four games with more than 100 yards surrendered. The return of defensive end Jabaal Sheard from a knee injury in Week 4 as well as Leonard’s eventual return will both be a spark for the Colts against the run. Despite their early struggles against the run this season, the Colts have now gone 23 consecutive regular season games without allowing an individual 100-yard runner, dating back to late in the 2017 season.

After missing five combined kicks in the first two games, Colts kicker Adam Vinatieri has gotten back on track, and has now made 14 of his last 15 kicks in the three games since. Punter/kickoff specialist/holder Rigoberto Sanchez has been as effective and reliable as ever. The Colts’ return specialists have also shown some spark, as Campbell and Rogers are both a threat to take it to the house if given the edge.