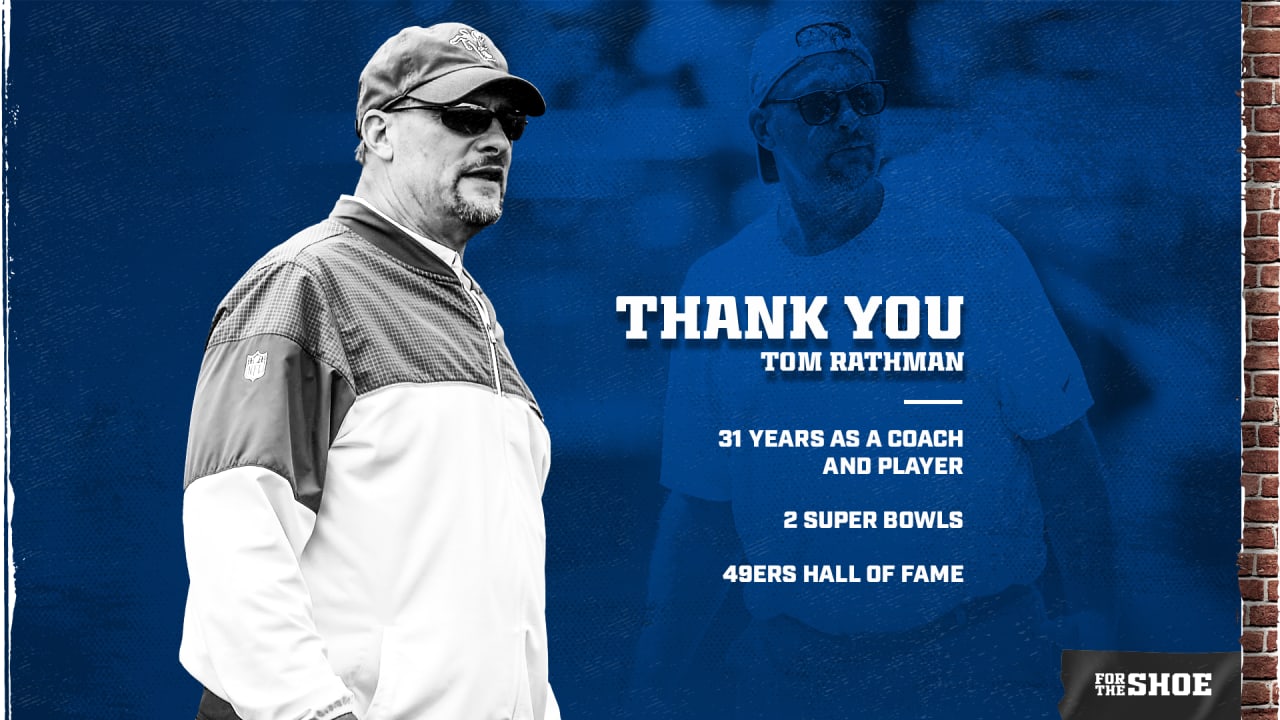 “Tom Rathman’s three seasons with the Colts caps an unbelievable NFL career that spans 31 years as a player and coach,” said Colts Head Coach Frank Reich. “He made an immediate impact in our running back room upon his arrival and he deserves a tremendous amount of credit for the development of our backs into multifaceted players. We’ll miss hearing his infamous ‘squeeze it!’ from the sideline at practice and on gameday. Tom won Super Bowls with San Francisco, is a member of the 49ers Hall of Fame and coached some of the best players in the game. We congratulate him on a phenomenal career and wish him all the best.”

“It was an honor to represent the NFL for more than 30 years as a coach and player,” said Rathman. “I was proud to represent and coach some outstanding players and I’m thankful for my time in Indianapolis. I’ll always be a Colts fan.”

In Indianapolis, Rathman helped the Colts register back-to-back seasons (2019-20) with a 1,000-yard rusher for the first time since 2003-05. From 2018-20, he worked with running back Nyheim Hines, who caught 170 receptions for 1,227 yards and six touchdowns. Hines established the franchise record for receptions by a running back in their first three seasons in the league.

In 2020, Rathman coached rookie running back Jonathan Taylor, who compiled 232 carries for 1,169 yards and 11 touchdowns. He also caught 36 passes for 299 yards and one touchdown. Taylor become just the fifth rookie in franchise history to register 1,000 rushing yards. Among Colts rookies in team history, he finished in the top-five in rushing yards (third), scrimmage yards (third), rushing touchdowns (tied-second) and total touchdowns (tied-third). Taylor was named the NFL Offensive Rookie of the Month for December. In Week 17 vs. Jacksonville, he tallied 30 carries for a franchise-record 253 yards and two touchdowns. Taylor became just the second player in franchise history to eclipse 200 rushing yards in a single game. Among rookies in NFL history, his 253 yards tied for the second-most in a single game. The rushing performance tied for the ninth-best in NFL history.

In 2019, Rathman’s group helped the Colts register a top-10 rushing attack for the first time since 2001 as the team boasted the league’s seventh-ranked rushing offense (133.1 yards per game). Indianapolis’ 4.52 yards per carry average was the fifth-highest single-season total in franchise history. Running back Marlon Mack finished 11th in the NFL in rushing yards with a single-season career-high 1,091 yards on the ground. He became the first Colts player to register a 1,000-yard rushing season since 2016.

Rathman worked with a young group of Colts running backs in 2018 that included second-year player Mack and rookies Hines and Jordan Wilkins. The trio combined for 2,171 yards from scrimmage (1,558 rushing, 613 receiving) and 15 touchdowns (12 rushing, three receiving). Hines compiled 63 receptions for 425 yards and two touchdowns. His 63 receptions were the third-most by a Colts rookie since 1970.

Rathman began his coaching career in California at the collegiate and high school levels. He served as the offensive coordinator at Menlo College in 1996 after serving as the running backs coach at Serra High School in San Mateo, Calif. in 1995.

A three-year letterman at Nebraska, Rathman rushed for 1,425 yards and averaged more than six yards per carry while playing for Head Coach Tom Osborne.