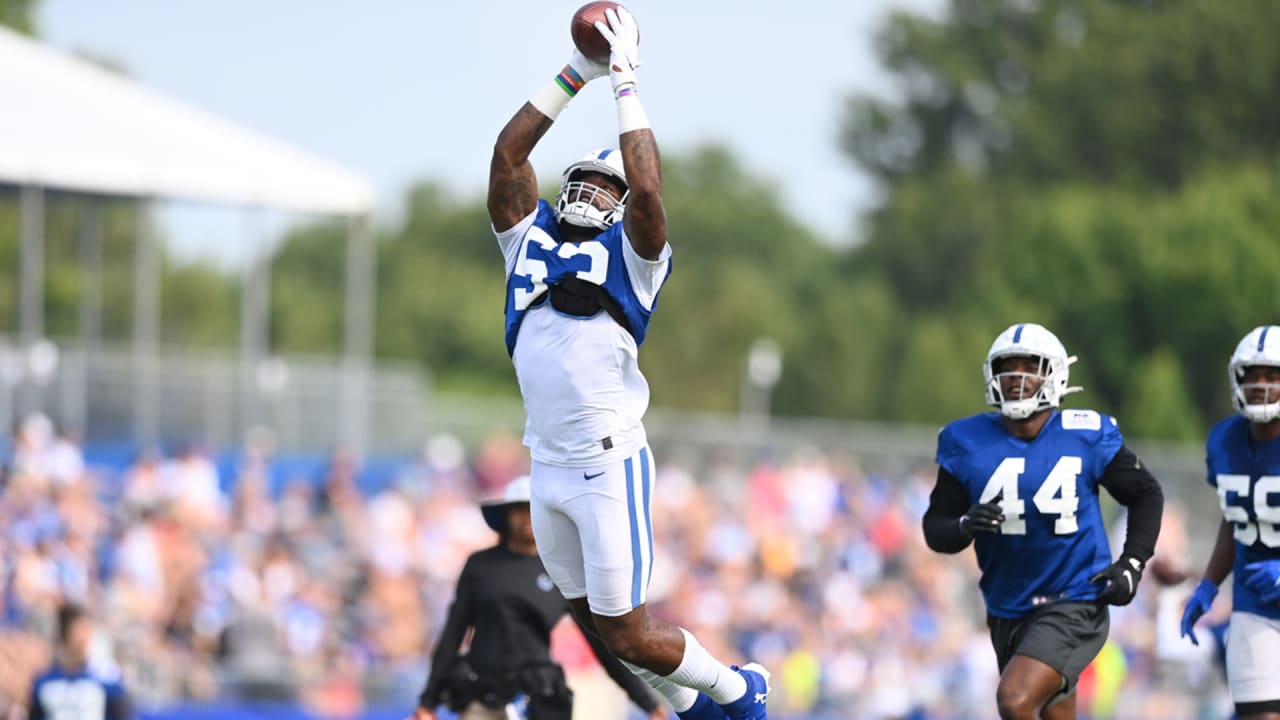 WESTFIELD, Ind. — The Colts returned to practice Tuesday at Grand Park after Monday’s players’ day off with good energy. And it probably wasn’t a coincidence that Tuesday marked the first time Darius Leonard traded in his cowboy hat for a helmet in this year’s training camp.

Leonard, who signed a contract extension on Sunday, was smiling, dancing, waving, yelling and running all over the field Tuesday morning. And his energy was constant on what coach Frank Reich thought was a crisp day of work.

“Came out with good energy, really good focus, very few mental mistakes. That’s the way we gotta practice,” Reich said. “The tempo was up, the music was up, the energy was up.

“Of course having 5-3 out there doesn’t hurt matters, right? He has a way of bringing a little extra juice to practice.”

Leonard underwent an offseason ankle procedure that kept him sidelined for the first 10 practices of training camp. But there’ll be no missing the Maniac’s presence on the field for the next month before the regular season kicks off Sept. 12 against the Seattle Seahawks at Lucas Oil Stadium.

“He’s the juice man,” defensive end Al-Quadin Muhammed said. “He’s got a lot of energy and stuff like that so it was great to have him back out there to bring that energy and it’s just rubbing off on everybody. It was great.”

Eight days after undergoing a foot procedure, Carson Wentz walked out to the practice fields at Grand Park wearing his red No. 2 jersey alongside Quenton Nelson, who underwent the same procedure one week ago. Of course, neither were practicing, but merely that Wentz and Nelson were present felt encouraging.

“We said after two weeks, that’s kind of when you start to get a feel for where you’re going to be,” Reich said. “Obviously as we’ve said, we think they’re both doing very well. So, good to have them back out there today and mentally engaged.”

Both Wentz and Nelson are still in the rest phase of their recoveries from their procedures on Aug. 2 and Aug. 3, respectively. They’ll stay in that phase until they’re two weeks out from the procedures, then can begin the rehab process. Once both are rehabbing, the Colts hope to have a clearer picture of when each can be cleared within the five-to-12-week window Reich provided last week.

“They look great, they look like they’re in great spirits,” right guard Mark Glowinski said. “Whenever the opportunity presents itself to get back in there, they seem eager.”

“I mean, competition is great. I mean every position has competition, especially during training camp. In that QB room we have a great relationship, but we’re always competing. I think we feed off each other’s energy and we sit there and we talk to each other during meetings and bounce ideas off each other – coaches included. That competition breeds a better result, so I’m all about it.” – Quarterback Jacob Eason on splitting first-team reps with Sam Ehlinger