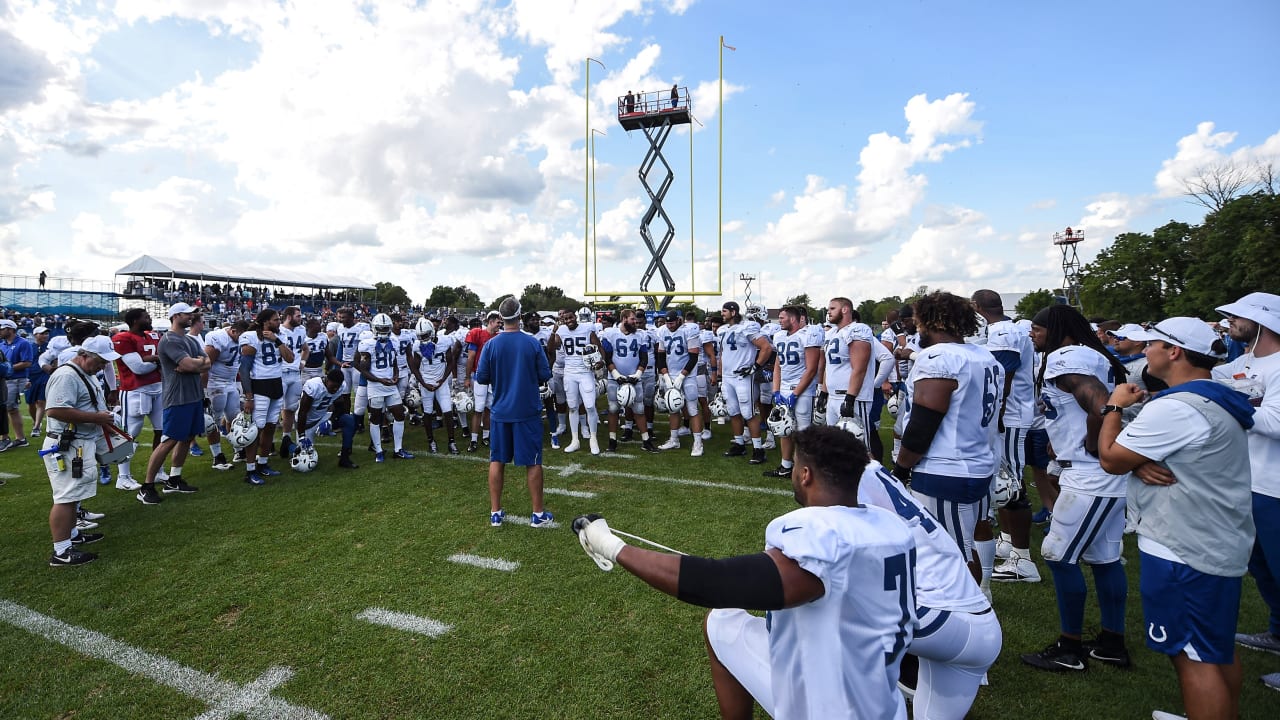 » Coach’s synopsis: The No. 1 objective of training camp is to get your team ready for the start of the regular season, and Colts head coach Frank Reich was overall pleased with the work put in by his team in its three-plus weeks in Westfield. “As a team I feel like we’ve grown, got a lot of good work, felt like we’ve been able to get better during the 16 practices that we’ve had here,” Reich said. “Really felt like we were able to dive deeper into what we’re doing, (get) a sense of belief and conviction in each other, in our systems and what we’re doing — I just think the roots grow deeper, and I think we accomplished that during these couple weeks.”

» Luck’s status: The hope entering training camp was that quarterback Andrew Luck would be able to gradually ease into team drills as he worked his way back from a strained calf injury that was aggravated over the offseason. But after participating in 7-on-7 drills in two of the first three camp practices, the team decided to pull Luck out of practice as a precaution after he continued to feel pain in his lower left leg. Since that time, the team believes it has pinpointed the source of the pain to the front of Luck’s ankle, so while he continues to lead walkthroughs and have throwing sessions off to the side, he’s hoping to make a return to the practice field as soon as possible. “Yeah, it’s really tough,” Reich said. “I mean, everyone knows the thing about Andrew is he’s a team-first guy, so the challenge of going through this process and wanting to be out there … but the good thing is we know he’s exhausting every resource that he can, he’s tireless in his efforts to get back out there and has been so engaged in every other way that I really think through a difficult situation there’s ways that makes you grow personally. And then, really, just as a team, he’s continued to stay involved with us in other ways.”

» Brissett’s shot: With Luck sidelined, backup quarterback Jacoby Brissett has had a prime opportunity to lead the No. 1 offense since the very start of the offseason program. Brissett put in some strong days during camp practices, and will hope to continue leaning on those valuable reps as Luck works his way back. Now in his second year in this offensive system, Brissett, according to Reich, has taken a considerable step forward in a number of areas. “I think his mastery of our protection schemes,” Reich said when asked what area Brissett has excelled at specifically. “The quarterback and the center really have to have complete control over that. I think Jacoby has made major – he was good last year — I really think he’s made major strides to get really good in that area. And then just generally speaking, getting the ball out quick with rhythm, with timing. Jacoby has got that big arm, he can get the ball down the field. But we still (are) always working for rhythm and timing in the pass game and then still taking advantage of his big arm when we can.”

» Extended absences: Other players haven’t been as fortunate when it comes to their injuries. Running back Spencer Ware was placed on the Reserve/Physically Unable to Perform list on July 24 with a muscle injury, according to general manager Chris Ballard. Two other players have been placed on injured reserve since the start of camp: tight end Billy Brown (unspecified injury) and wide receiver Steve Ishmael (knee). Then there’s wide receiver Daurice Fountain, who was having a tremendous camp when he went down with a “significant ankle injury” in Thursday’s final day of practice; Fountain was hospitalized and will require surgery, according to Reich.

» Clean bill: Several players who entered camp with injury-related questions, or those who were working their way back from season-ending injuries in 2018, were either full-go or darn close to it throughout camp. Those coming back from season-ending injuries who were looking solid: wide receiver Deon Cain (knee), wide receiver Marcus Johnson (ankle), tight end Jack Doyle (hip), tight end Ross Travis (knee), safety Matthias Farley (wrist) and linebacker Skai Moore (neck). Others who have battled injuries in the past who barely missed any time — if any — during camp: running back Marlon Mack, safety Malik Hooker, safety Clayton Geathers and cornerback Quincy Wilson.

» Roster battles: If the Colts’ coaching staff hoped to have more clarity in regards to the team’s various roster battles by the time camp broke, then we have some good news and some bad news. The good news is those players fighting for spots haven’t really budged a bit; the bad news is that means these are going to be some extremely tough choices for the staff on Aug. 31, when the Colts must cut down their 90-man preseason roster into its first 53-man regular season roster. Two spots in particular have been ultra competitive: wide receiver and cornerback. At receiver, Cain, Parris Campbell, Krishawn Hogan, Johnson, Zach Pascal and Chester Rogers, among others, have been duking it out for the final three to four spots on the depth chart. At cornerback, Jalen Collins, Nate Hairston, Chris Milton, Marvell Tell III, Wilson and Rock Ya-Sin, among others, have been doing the same. One thing’s for sure after 16 training camp practices: the Colts are going to be forced to let go of some really talented players.

» Instant impacts: The Colts saw just how quickly rookies could make an impact last year, when guys like Quenton Nelson, Darius Leonard, Braden Smith, Kemoko Turay, Tyquan Lewis, Nyheim Hines, Wilkins, Matthew Adams and Zaire Franklin all were key contributors to Indy’s return to postseason action. It appears the Colts will have several key rookie contributors again in 2019. Ya-Sin simply looks like he belongs at cornerback, logging several interceptions and being as advertised in regards to toughness. While he was hampered at times by a hamstring injury, Ben Banogu had a strong finish to camp rushing off the edge. Campbell had a strong start to camp, and once he’s able to return from his hamstring injury should have a nice role in the offense. Bobby Okereke and E.J. Speed were seen getting plenty of valuable first-team reps at times during camp practices at linebacker, and should be key pieces of depth as well as special teams standouts. Khari Willis is clearly in the mix at safety and picked off Browns quarterback Baker Mayfield in the red zone in the team’s final joint practice session Thursday. And Marvell Tell III (cornerback), Gerri Green (defensive end) and Jackson Barton (tackle) hope to continue their development in practice and with whatever reps come their way in practices. And let’s not forget about the fact that the Colts have had an undrafted free agent make the Week 1 roster for 20 straight seasons. Could tight end Hale Hentges, a solid blocker at Alabama who surprised many with his consistency in the passing game in camp, push that streak to 21 straight years here on Aug. 31?

» T.Y. Hilton = good: T.Y. Hilton is, obviously, one of the best wide receivers in football, but his status as a Colts legend increased ten-fold last season when he played through not only chest and hamstring injuries suffered Week 4 against the Houston Texans, but then toughened it out down the stretch playing through both a high and low sprain to the same ankle, also suffered against the Texans in Week 14. Despite the fact he could barely practice, Hilton still led the entire NFL in receiving yards the second half of the season, and was a key reason why Indy was able to not only advance to the postseason for the first time in four seasons, but go back into Houston and defeat the AFC South Division champions Texans in the Wild Card Round. Now fully healthy, Hilton looked unstoppable in his recent stay at Grand Park, and seems prime for another terrific season. “He looks so good right now,” Reich said. “We talk about it all the time: this guy is an elite, elite, elite route runner. He’s got elite football smarts. That’s just my experience. The great players like T.Y. – especially receivers – they just have that football intelligence that is just off the charts. He just has these instincts to understand leverage and coverage the way few guys do. His body language – again, it’s hard to explain but as a quarterback you watch him run his route and you just feel exactly where he is going to be. It makes the throw accurate. Then he’s got tremendous ball skills on top of it.”