ASHBURN, Va. — The Washington Commanders have intriguing options among their skill-position players. They have potential. But they also have uncertainty with that group because of injuries.

They might have the necessary playmakers to win. They should add more this offseason just in case.

Commanders coach Ron Rivera has spent the offseason, thus far, explaining why the team will be aggressively pursuing a quarterback. And the top factor, he said, stems from confidence in the roster: The Commanders believe the defense will be good in 2022, the offensive line has depth, and running back Antonio Gibson finished strong and continues to improve.

And they have potential at receiver.

“It is a position we do like,” Rivera said. “It’s a good position.”

The anchor is Terry McLaurin, coming off his second 1,000-yard season in his first three years. He and Gibson are surrounded by skill players who have shown flashes of greatness but struggled to stay on the field this past season.

Is it enough to win the NFC East? ESPN NFL analyst Matt Bowen says that answer will be determined by their starting quarterback. However, he says even if Washington gets a mid-tier starter such as Jimmy Garoppolo, “I believe it’s enough to compete in that division and that’s all you can ask for.”

Four players in particular have shown the ability to complement McLaurin and Gibson, giving the team an explosive attack. But their injury histories might compel Washington to add more competition.

Tight end Logan Thomas: He’s been one of Washington’s best free-agent signings in a while, a low-level pickup in 2020 who blossomed into a solid starter. In two seasons — he missed 10 games this year because of injuries — he’s caught 90 passes, nine for touchdowns. In the past two seasons he’s been one of the most productive tight ends in the red zone, a function of his size (6-foot-6, 250 pounds) and route running. He’s third among tight ends in red zone receiving yards the past two years combined, despite playing at least 10 fewer games than those ahead of him. And he’s a friendly target for Washington quarterbacks, who completed 68 percent of their throws to him. Only Dwayne Haskins was under 70 percent.

However, Thomas tore his ACL on Dec. 5 and there’s no guarantee he’ll be ready for the start of the season. If he’s back in September and good to go? Thomas is a valuable part of the offense.

Receiver Curtis Samuel: Washington envisioned him lining up wide, in the slot and in the backfield. Samuel, a college running back, averaged 11.05 yards per catch in 2020 with Carolina. Offensive coordinator Scott Turner said he wanted to use Samuel as a downfield target — when healthy. And those last two words defined Samuel’s 2021 season. He never was healthy and played in only five games and caught six passes. There’s a track record to suggest Samuel will help Washington, but to what extent? Will the soft tissue injuries — first his groin and then his hamstring — flare up this season? There’s reason for optimism regarding Samuel, but fingers will be crossed as well. His presence would reduce pressure on McLaurin.

“The key here is having Samuel healthy,” Bowen said. “There’s no question about the versatility and impact he can bring. He’s your middle-of-the-field stretch target and a dynamic player with the ball in his hands.”

At season’s end, Samuel said, “I’m mentally focused and locked in and really ready to go. I haven’t felt this way in a really long time. I’m gonna put in so much work to try to put myself and the team in the best position next year to win games.” 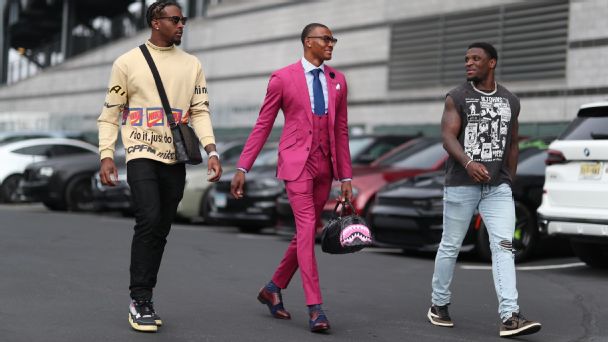 Running back J.D. McKissic: Like Thomas, he was a terrific signing in 2020 but dealt with injuries this past season. He played in parts of 11 games, but he’s caught 47 passes in two years with Washington. His versatility, owing to his days as a college receiver, enables Washington to use him on a variety of routes.

He’s coming off a neck injury and is a pending free agent. Washington wants to re-sign him and lacks anyone else like him on the roster.

“He’s a vital part of what they do,” Bowen said.

Receiver Dyami Brown: He was drafted in the third round last year because of his speed (4.45 seconds in the 40-yard dash). But Brown never developed as a deep target for Washington. He finished his rookie season with 12 catches for 165 yards and no touchdowns.

He was slowed by a knee injury in early October, but did manage to play 15 games. He showed improvement late, flashing in Weeks 16-17 with three catches for a combined 78 yards — displaying his downfield speed as well as the ability to go over the middle. And they liked how he played as a gunner in coverage, becoming more physical and competitive and using his hands to get free — traits they hope translate to receiver.

“Most of [my improvement] came toward the end of the season. That’s when I really got a feel for the game and understood what was going on around me,” Brown said. “My technique got complete and I was able to fix it along the way.”

Bowen said Brown “has to be their outside vertical stretch target.”

“We know what [McLaurin] can do. He’s a top-level route runner and high-volume target, but they need complementary pieces around him. If everyone’s healthy and on the right track they have enough talent. The question goes back to: Who’s throwing them the ball?”

Tags: commanders he they