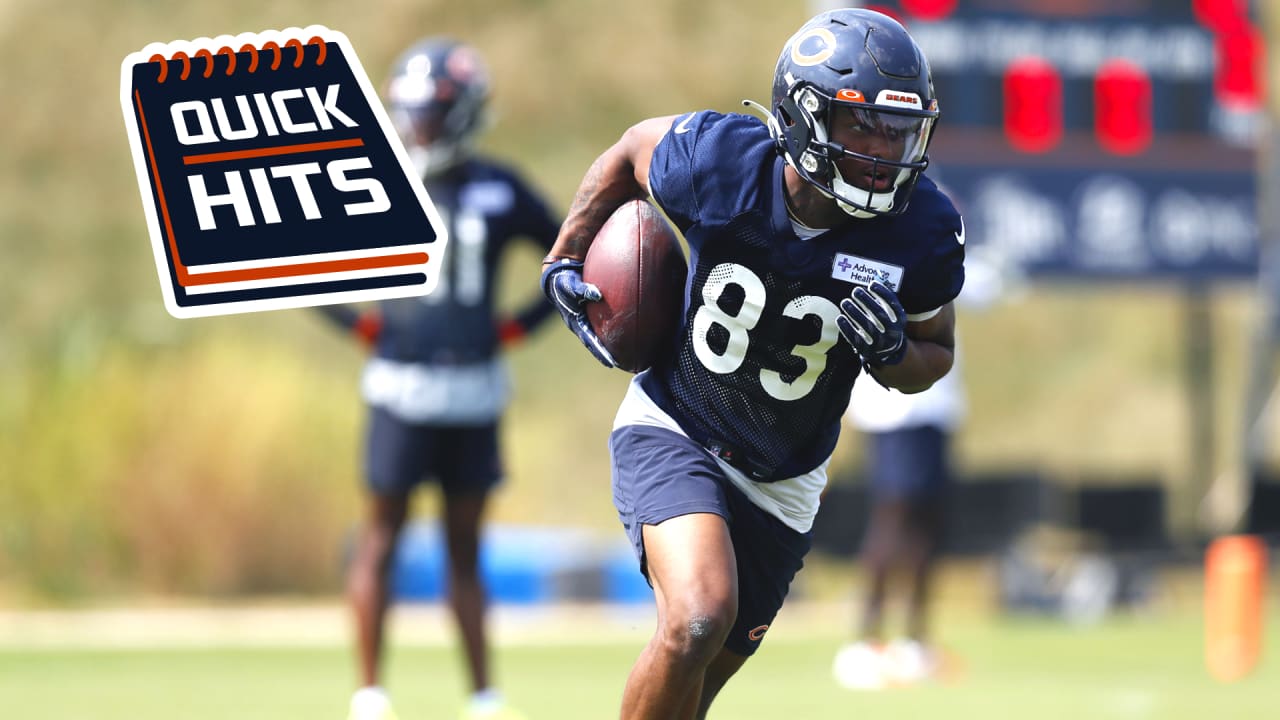 Newsome was drafted by the Bears after catching 188 passes for 2,435 yards and 18 touchdowns in 43 games over four seasons at North Carolina. The 5-10, 190-pounder had a breakout junior year in 2019, establishing career highs in all receiving categories with 72 receptions, 1,018 yards and 10 TDs. Last season he followed with 54 catches for 684 yards and six TDs.

While Newsome hopes to show in training camp and preseason games that “I’m a coachable player and I’m a baller,” the Bears are just as eager to see what the rookie receiver can do now that he’s healthy.

“Dazz is a great kid,” said coach Matt Nagy. “He’s got an infectious personality as you all see. It’s just very authentic and real. It’s also neat to see him want to learn from these older receivers, too. He’s just taking it all in. It’ll be interesting to get him out here and really get going and see what he can do.”

Nagy hosted close friend and former colleague Doug Pederson at practice Friday and Saturday. Pederson, who led the Eagles to their first Super Bowl championship in 2017, was fired by Philadelphia following last season.

“For me, it’s nice even when we get off the field, he comes in, we watch some tape and it’s good to just talk head football coach stuff,” Nagy said. “I like listening to some ideas and thoughts he has, whether it’s practice ideas, schedule ideas, gameday stuff. For me, it’s part of that continuing ed, and I respect who he is and how he does things. The guy won a Super Bowl. It’s nice to have a friend here, and it helps him out, too.”

Nagy and Pederson worked together as offensive assistants under Andy Reid for seven straight seasons with the Eagles (2009-12) and Chiefs (2013-15).

“Doug and I, not only were we on the same staff, but we worked hip-by-hip, hand-by-hand for every practice,” Nagy said. “Then he goes to Philadelphia as the head coach, I’m in Kansas City and then I come here, so there’s been that separation. It’s always nice to say, ‘OK, when you went to Philadelphia, what did you change from Kansas City? What did I change?’ Then you talk through the whys of it. And then every now and then we bounce some plays off of each other.”

Being smart with practice reps

Being hit hard by the injury bug so far in training camp has forced Nagy and his staff to constantly adjust.

“No. 1, we understand that we’re in training camp and some years you get fortunate and other years you have a longer list,” Nagy said. “We just understand we’ve got a lot of time and this is where we’re at, and then the next guy steps up. And then what we’ve got to do is just make sure with wherever your numbers are at, that’s where the coaching comes in with the volume and the scripting and just being smart with that and making sure that we do everything the right way.”

Turning opportunities into a career

The rash of injuries in camp is giving some inexperienced and unheralded players opportunities in practice they normally would not receive. Nagy said he hasn’t spoken to them about the importance of making the most of those chances because it’s something they already understand.

“I think it’s assumed,” Nagy said. “They know that because they’re in competition regardless; even if there’s not that ‘opportunity,’ they know they’re competing. They’re in training camp. We’ve got 90 guys [and] we’re going to have to cut it down. These guys are auditioning for so many other teams that aren’t going to make it.

“I do think there are times where you can use some examples of players across the league, and it’s not always the Tom Brady example where Drew Bledsoe goes down and Tom Brady comes in. There are a lot of other examples where guys can go down and other guys take that opportunity and turn it into a career. At some point maybe we’ll bring that up, but I think they understand it.”