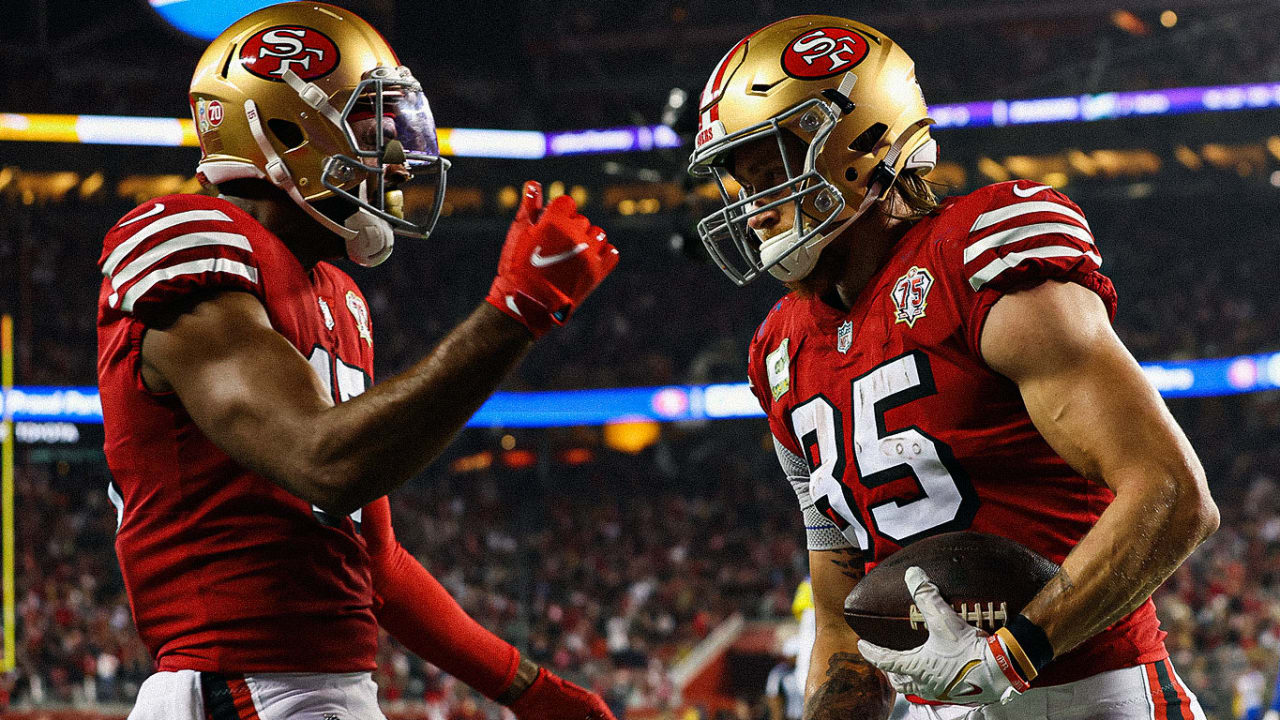 ﻿Jimmy Garoppolo﻿ hasn’t put up a ton of fantasy points, but he’s getting 9.2 YPA over the last five games (facing three top-10 pass defenses) while engineering an incredibly efficient San Francisco offense. Volume (and lack of running) remains a fantasy hurdle for Jimmy G, as does playing without ﻿Deebo Samuel﻿ (groin) this week, but he gets a beatable Seahawks pass defense that ranks 27th in DVOA. Still, Garoppolo is more of a Superflex fantasy option in a matchup featuring two slow-paced teams.

Highly questionable to even play after undergoing finger surgery, ﻿Elijah Mitchell﻿ suited up last week and finished with the second-most opportunities (33 carries/targets) in the league. He’s averaging the third-most rushing yards per game among all backs and is clearly San Francisco’s workhorse; the team even designed some screens for him last week, when he finished with a career-high six targets. With Samuel out and on an SF team with the second-highest run rate in neutral situations over the last month, Mitchell can safely be projected for a ton of volume against a Seahawks defense that’s allowed the second-most fantasy points to running backs this year. He’s a top-three fantasy RB in Week 13.

﻿Brandon Aiyuk﻿ finished top-20 in air yards share last week and should see further increased volume with Samuel sidelined. Aiyuk has impressed just like he did as a rookie over the last month and gets a favorable matchup this week against a vulnerable Seahawks secondary. Aiyuk saw the second-most targets inside the 5 yard line as a rookie over just 12 games last season and should be treated as a top-15 WR this week.

﻿Jauan Jennings﻿ is a deep sleeper as San Francisco’s new receiver in the slot, where the Seahawks have allowed the second-most fantasy points this season. ﻿George Kittle﻿ also gets a boost with Samuel out and has a strong argument to be ranked as fantasy’s No. 1 tight end this week. He’s due for more action after being held to just six targets over the last two weeks.

Russell Wilson is struggling unlike any other time during his career (partially thanks to a serious finger injury that may not fully heal until after the season); no Seahawks running back can be trusted in fantasy leagues; and somehow Tyler Lockett and DK Metcalf are both averaging fewer than seven targets per game this season. Put differently, Wilson hasn’t been a top-15 QB (fantasy points per game), Chris Carson ranked outside the top-25 RBs before going down for the season and neither Lockett nor Metcalf have been top-20 WRs. Things haven’t gone quite as expected in Seattle this year.

You’re taking a leap of faith starting Wilson in fantasy leagues right now, but he has a Hall of Fame resume and should be looking at good volume Sunday with Seattle having almost no chance of running with any success and facing a 49ers offense likely to score plenty of points. Wilson has gotten 9.6 YPA at home compared to 7.4 on the road this season and will benefit from ﻿Fred Warner﻿ likely to miss this game.

The 49ers enter ranked No. 22 against the pass and No. 2 versus the run in DVOA, so Seattle’s passing attack will be leaned on heavily Sunday. Expect Lockett and Metcalf to rebound and can be used in fantasy lineups, while Gerald Everett has emerged as a viable option at tight end.

Dalton Del Don has been with Yahoo Sports since 2013, covering fantasy football, baseball and basketball. He appears on multiple podcasts each week and currently resides in the Bay Area, where he is an avid fan of the Golden State Warriors and 49ers.

For Del Don’s Fantasy Football Week 13 Primer and Picks and other fantasy insight from around the league, visit here.