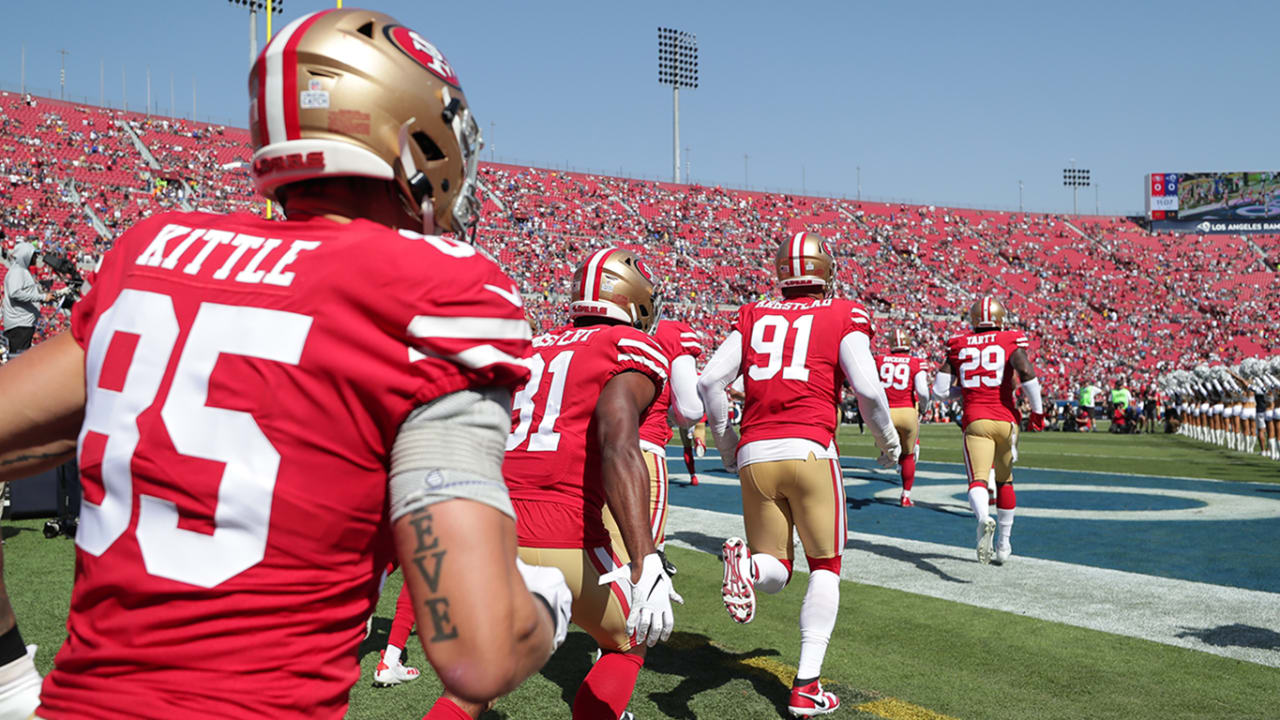 George Kittle is a believer in the 49ers potential heading into the 2021 season. In fact, the star tight end believes the team has all of the makings to not only match, but surpass their 2019 success.

Just a year removed from a Super Bowl appearance, the 49ers were hit with an insurmountable number of injuries that derailed the team’s “revenge tour” en route to an uninspired 6-10 record.

On Tuesday, Kittle was a guest on NFL Network’s “Good Morning Football” and shared his confidence in the team’s ability to rebound from their substandard outing just a season ago given the load of talent returning to the roster this season.

“I don’t know if you guys saw this but Nick Bosa is coming back and we re-signed Trent Williams﻿. So those guys are pretty good at football from what I remember. They’re pretty decent,” Kittle said.

In addition to the 49ers making Williams the highest paid offensive lineman in the league this offseason, Kyle Shanahan hinted at the nearing returning for their standout pass rusher. Bosa has spent the offseason working his way back from a season-ending ACL tear sustained in Week 2 of the 2020 season. The pass rusher was on hand for a portion of the team’s offseason workout program with the anticipation of making a return to the field for training camp next month.

There were high expectations for Bosa heading into Year 2 on the heels of his Defensive Rookie of the Year campaign. San Francisco’s pass rush was one of the key factors in their Super Bowl success in 2019, and the loss of Bosa and several other playmakers forced the team to see a dip in production.

This offseason, Kittle hasn’t been shy about his enthusiasm for the edge rusher’s return. He believes Bosa has the makings to pick up right where he left off heading into the 2021 season.

“I actually just saw something on ESPN that said ‘Who are the top two pass rushers in the NFL’ and Nick Bosa didn’t even make the Top 10, which is crazy because that dude won NFL Defensive Rookie of the Year and he’s just going to keep getting better and better. People tend to forget when you take a year off, but it is what it is.”

Despite losing multiple key defenders last season, the 49ers defense still ranked fifth in total defense, fourth in passing defense and owned the seventh-best rushing defense. In addition to Bosa’s return, a large contingency of the 49ers defense are scheduled to return in 2021. Kittle believes the talent at hand has the makings to return to the once-vaunted unit they owned just 15 months prior.

“On the opposite side of Nick Bosa﻿, you’ve got Dee Ford﻿. You’ve got Arik Armstead﻿,” he continued. “Now we bring back our All-Pro linebacker Fred Warner and the two young guys outside of him who’ve been learning (and) had a great OTAs. And we bring back five starters in the secondary. Our defense is scary. It was shown in the Super Bowl. If you can’t move the ball against a defense, you can’t put up points. Defense wins championships at the end of the day.”

Additionally, the 49ers will see a number of their offensive starters return in 2021. That coupled with a healthy Kittle, who is regarded as one of the best tight ends in the league, offers lots of confidence in San Francisco’s anticipated return atop of the NFC.