LAS VEGAS — How dire did things get for the Las Vegas Raiders‘ reshuffled wide receiver corps in Sunday night’s 41-14 blowout loss to the Kansas City Chiefs?

Even when the newest member made a headline-grabbing catch, he followed it with a head-scratching decision, one that shifted the momentum of what had been a relatively competitive game into a laugher.

Yes, DeSean Jackson‘s first catch as a Raider was impressive, the 14th-year vet taking the top off the defense with his preternatural speed only to come back and haul in Derek Carr‘s slightly underthrown pass for a 40-yard gain. But for some reason Jackson, who beat Chiefs safety Tyrann Mathieu and caught the ball in stride near the right hashmark while running toward that sideline, stopped. And with cornerback Rashad Fenton bearing down on him, Jackson spun back toward the middle of the field, 2 yards shy of where he had caught the ball.

Fenton then corralled Jackson and punched the ball out, and a pursuing Mathieu scooped it up.

So instead of the Raiders potentially pulling to within 24-21 midway through the third quarter, the Chiefs turned the takeaway into a field goal and a 27-14 lead.

“So I said something to him just about, Just keep battling. He’s been through those things before. So we’re looking forward to him hopefully having a bigger role as we get going here.”

It was Jackson’s first lost fumble on a reception since 2010.

Jackson signed with the Raiders on Nov. 8, after Henry Ruggs III was cut following his arrest in the wake of his car crash that resulted in the death of a 23-year-old woman and her dog.

And while Jackson, who had the one catch for 38 yards, was not made available to the media after the game, his teammates took up for him.

Carr said Jackson’s speed kept the Chiefs honest, that they were “set back” in the defense, opening up intermediate routes for the likes of fellow receivers Zay Jones, Bryan Edwards and Hunter Renfrow.

And it was Edwards, draft classmates with Ruggs, who showed up after being shut out last week at the New York Giants.

Edwards had 88 yards receiving, including a 37-yard TD catch, on three receptions. Renfrow had a team-high seven catches for 46 yards, with a 6-yard TD catch.

Not the most explosive WR corps in the league, but it can get yards in chunks when utilized properly. And the addition of Jackson should help clear things out underneath in the same manner Ruggs did. 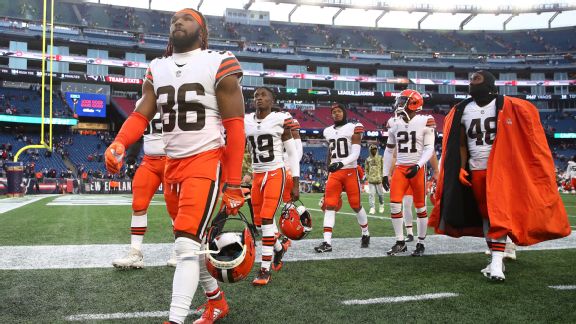 • Browns must end ‘Jekyll and Hyde’ displays
• Jackson gives highlight, lowlight for LV
• What the Colts’ wild-card hopes ride on
• Why Eagles could make the playoffs
• Week 10 takeaways: What we learned

So long as his miscue doesn’t mess up his game.

“We just told him, ‘We’re going to get it back,'” Edwards said of his advice to Jackson after his fumble. “That’s what everybody’s attitude is when something bad happens. We don’t turn against each other. We kind of embrace each other.

“I mean, he made a really nice catch. Just got to finish it.”

And there it is. The Raiders receivers are their biggest supporters as well as their greatest critics. And for them to continue to mature, gain and, yes, regain the trust of Carr, they need to make plays.

It was Renfrow who spoke in almost a reverential tone of Jackson as the new veteran leader of the unit last week, saying he grew up watching Jackson.

After one game as his teammate?

“To come out, to get us going … to come off the street, basically, and learn a new offense, it was awesome to see him make that catch,” Renfrow said. “Yeah, there’s some negatives to it but, I think, focusing on the positives, that was a heck of a play to get his eyes around. Derek threw it on line.

“But yup, I think he would definitely want to have that one back, and we would too, for sure.”