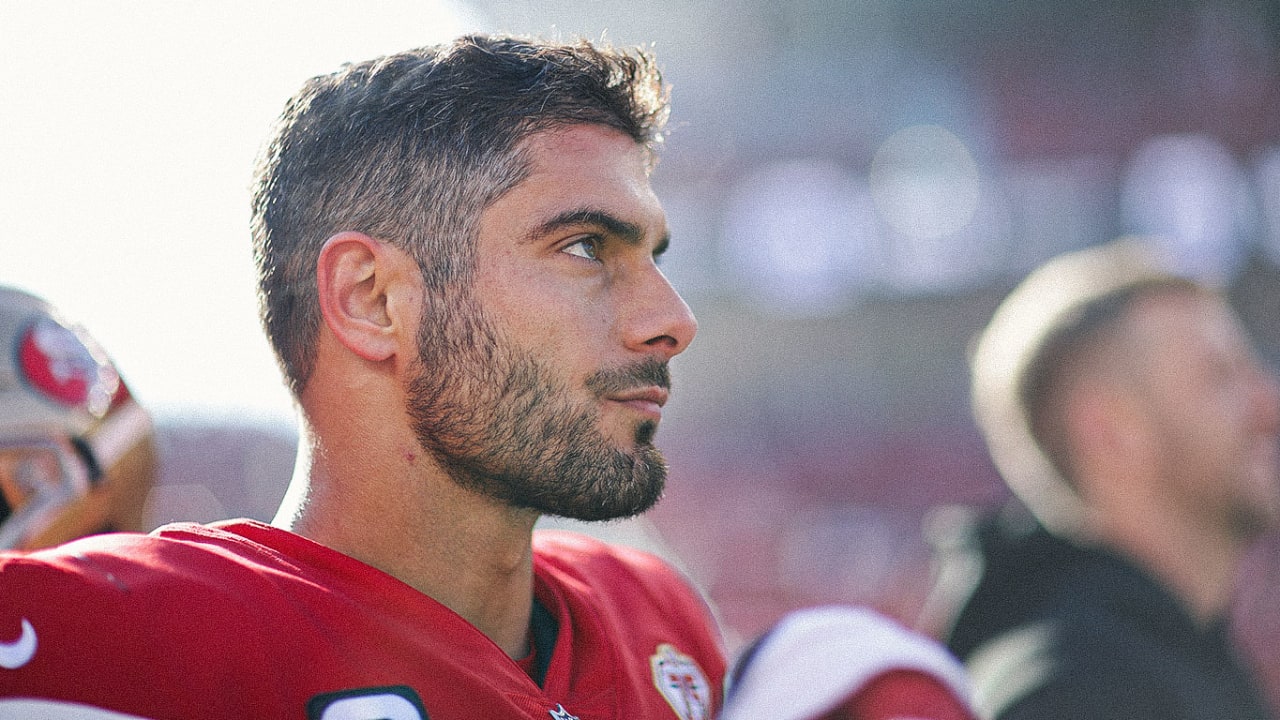 Ahead of the San Francisco 49ers regular season finale against the Los Angeles Rams, reality sunk in for quarterback ﻿Jimmy Garoppolo﻿ following a pregame conversation between himself and fullback ﻿Kyle Juszczyk﻿.

“I can remember before the game, Kyle Juszczyk, our fullback, came up to me and we hugged, and he was like, ‘Man, I don’t want to get emotional or anything, but this is our last regular-season game together,'” Garoppolo told Sports Illustrated’s Albert Breer. “It was a pretty cool moment, and from that point on, I really was like, ‘This could be it.'”

Those queries continued throughout the regular season as the quarterback dealt with injuries, forcing Garoppolo to be sidelined for two contests this year, in addition to a discouraging 3-5 start for a promising 49ers team. Fans and media questioned San Francisco’s approach at the quarterback position and what that meant for Garoppolo’s future.

“It’s always in the back of your mind. It has been in mine really this whole season,” Garoppolo said on Wednesday. “I knew what type of season it was, knew everything that was going on behind the scenes and whatnot. So, it was a little different. But, at the same time, it’s like you’re saying, you’ve got to tow that line because you don’t want to get too emotional in those moments. And you’ve just got to go play football when it comes down to it, but the human side definitely comes into play. You feel it for a little bit after the game. And I think 24 hours after that, you’ve got to move on quickly and we’ve done that pretty well.”

But Garoppolo’s value to San Francisco cannot be overstated. Since joining the 49ers midway through the 2017 season, the quarterback is 33-15 as the team’s starter (postseason included). During this stretch, Garoppolo also played through a number of injuries, including a thumb sprain that was originally suggested to keep the quarterback out for the remainder of the 49ers 2021 campaign.

After the quarterback’s heroics in the 27-24 overtime victory against the Rams, Garoppolo and the 49ers get, at the very least, one more ride together as the team is set to head to Dallas to take on the Cowboys. Unfazed by previous mistakes during that Week 18 outing, the quarterback stepped up and led the team to an overtime win, as Garoppolo completed 23-of-32 throws for 316 yards and a touchdown in the victory.

But numbers, records, injuries and emotions aside, it still remains to be seen what the future holds for Garoppolo. But one thing is certain, the quarterback hopes this ride the 49ers are on doesn’t stop anytime soon.

“It’s these guys on the team, I love this team, love the players, love everything about it,” Garoppolo added. “It’s a good group to be around, a fun group. And we want to keep this thing going for as long as we can now.”