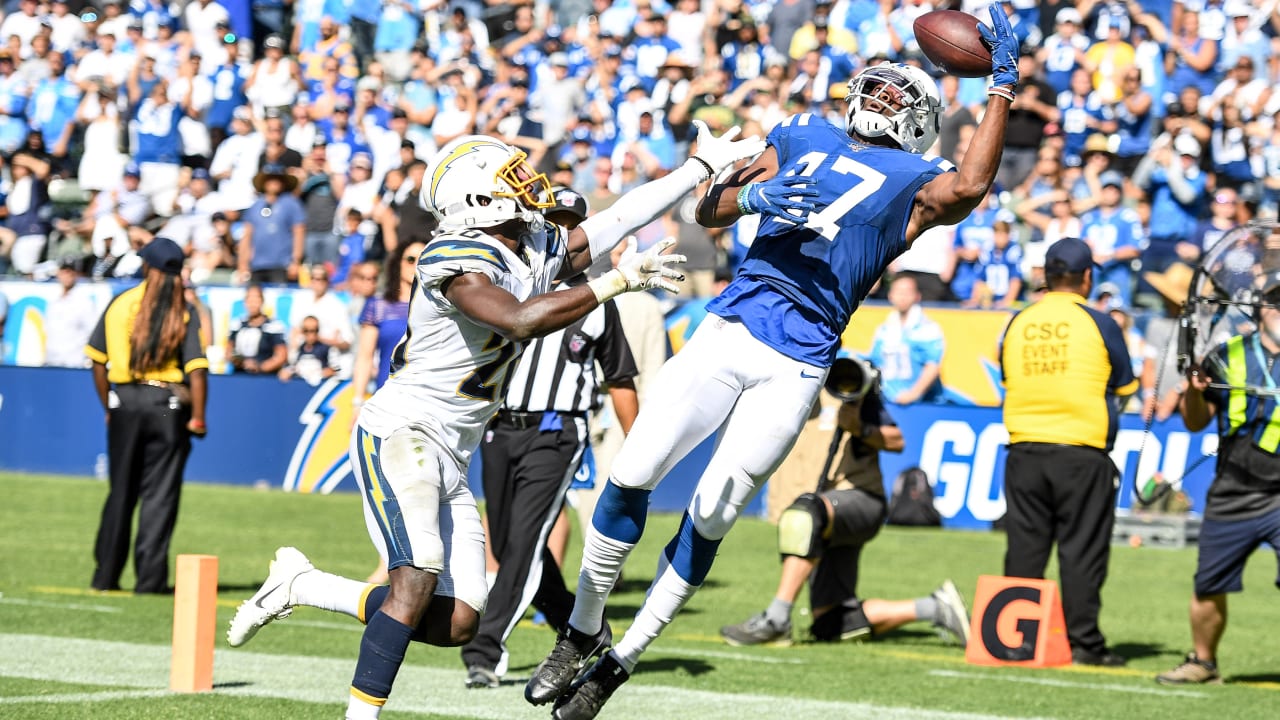 But despite undergoing surgery on Monday, there’s a chance Funchess could return to the active roster later this season, Reich added.

“It’s definitely not season-ending,” Reich said of the receiver’s injury.

Funchess suffered the injury late in the fourth quarter as the Colts were rallying their way back from a 15-point second-half deficit against the host Chargers. With 53 seconds remaining in regulation, quarterback Jacoby Brissett, on 1st and 10 from the Los Angeles 19-yard line, fired a pass deep down the left sideline for Funchess, who was in one-on-one coverage against cornerback Brandon Facyson.

Funchess was able to haul in the pass in the end zone, but landed out of bounds — and directly on his left shoulder.

“It’s a tough break for Devin,” Reich said. “We really love Devin. Just felt like there was a growing chemistry between he and Jacoby — Jacoby really likes throwing him the ball; he’s a big, strong guy. So he’ll bounce back from this thing and get ready to go.”

The 6-foot-4, 225-pound Funchess was one of the Colts’ top free agent additions this offseason, giving Reich’s offense a big target and solid No. 2 receiver to take attention away from Pro Bowler T.Y. Hilton.

Funchess caught three passes for 32 yards Sunday in his Colts debut, none bigger than his eight-yard reception on 4th and 3 from the Chargers’ 49-yard line during that final game-tying drive for Indy in which he dragged Facyson about four extra yards before being brought down on the Indy sideline.

Eight plays later, Brissett found Hilton for a 19-yard touchdown, and Marlon Mack would punch in the two-point conversion from there to tie the game at 24 and force overtime. The Chargers would then earn the win during the overtime period on a seven-yard touchdown run by Austin Ekeler.

From here, the Colts will rely on a number of receivers to step up in Funchess’ absence. The team had six wide receivers active for Sunday’s season opener, and Reich said the four players on the depth chart past Hilton and Funchess — Chester Rogers, Deon Cain, Parris Campbell and Zach Pascal — should all see added opportunities moving forward.

“We have some good young receivers,” Reich said. “And going in we had six active in the game — that’s very unusual for an NFL team to have six active receivers in a game — but we felt that strongly that all six of our guys can contribute, and they did contribute.”

As for Funchess, he’s required to remain on IR for at least eight weeks before he can be brought back to the active roster, should the team choose to use one of its two return-from-IR spots on the receiver at that point of the season.