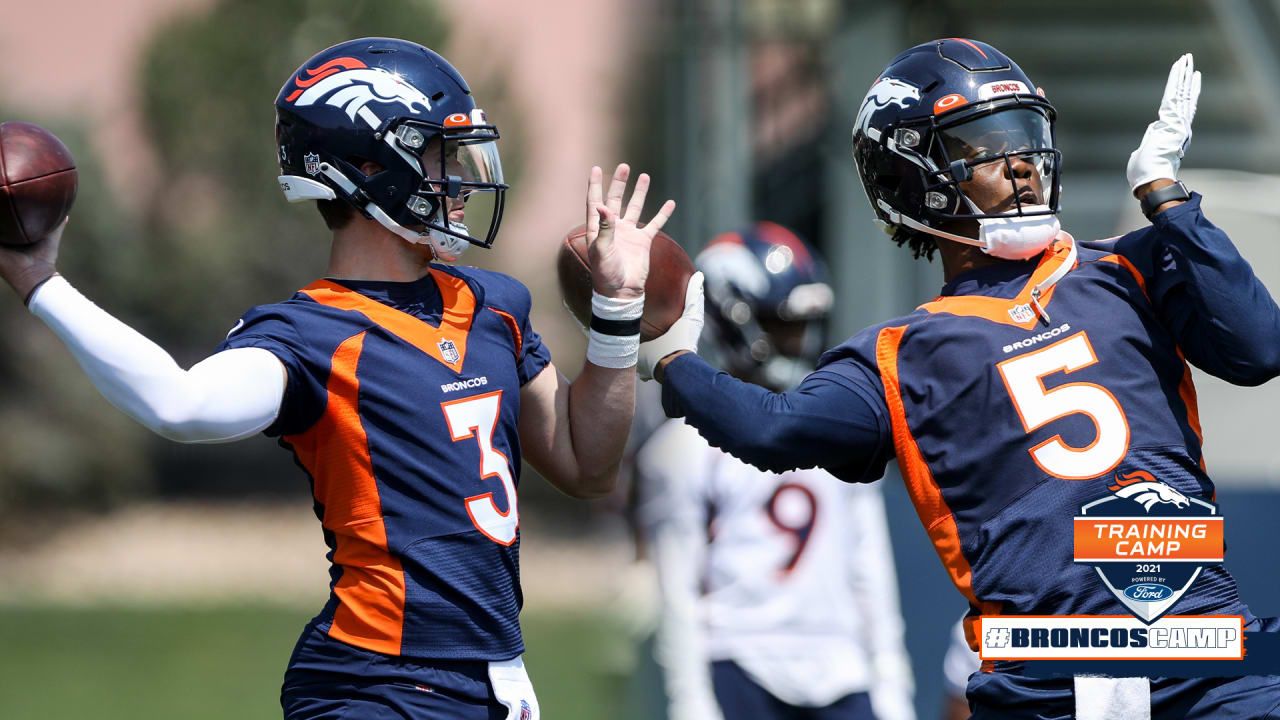 ENGLEWOOD, Colo. — When the Broncos take the field for their first training camp practice of 2021 on Wednesday, the team’s incumbent starter is expected to jog out for the first snaps of the team period.

Drew Lock will kick off the Broncos’ quarterback competition, Head Coach Vic Fangio said Tuesday, but the battle between Lock and Bridgewater will resemble much of the offseason during the early days of training camp.

“We’ve got these first four days, it’ll be just like you witnessed in minicamp – you weren’t here in OTAs – but everything was 50-50 — what group they worked with, who started how many drills, etc,” Fangio said. “After four days — I know you’re all keeping your little charts — it’ll be 50-50. Unless, it’s an odd number; then somebody’s got one more. And then we’ll take a look at it after the first off day.

“Maybe we might do a day where one of them gets 70 percent and the other gets 30 and then flip it the next day. I think when you look at it up until the point where we make a decision, it’s going to be a 50-50 thing, both from a reps standpoint and working with what group.”

Fangio did caution reporters to be careful about characterizing first-team reps.

“We may be changing in and out wide receivers per play, so you may look out there and what you view as the first-team wide receivers aren’t there, but the first-team line is,” Fangio said. “How do you view that or vice versa? The other positions aren’t going to be dialed in always with who the quarterback is.”

As the competition continues into August, Fangio said Lock and Bridgewater would “probably” each start a preseason game before the team makes a decision. That decision, General Manager George Paton said, will fall to Fangio and the team’s coaching staff — and there’s not a definitive timeline on making the choice.

“Vic is going to make the call,” Paton said. “Just me personally, I don’t think you put a deadline on it. You’d hope to see some separation as we get into Minnesota with the scrimmages and [as] we play some games. I know it’s tricky and they both need the reps. I wouldn’t put a time frame on it. I think it needs to just happen organically, and again, that’s up to Vic and his coaches.”

Fangio said while he’d prefer to “come to that decision sooner rather than later,” the team will allow the decision to become evident before making a choice — even if it is prolonged into September.

“We’re going to let the decision be made for us, hopefully,” Fangio said. “And whenever that happens, it happens. If it’s so close that we can’t make a call and it stretches into the first week of preparation, then I’ll probably be playing games with you all week that first game week. We’re like everybody else. We want it to define itself quickly, sooner rather than later. But we’re going to let the process play itself out.”

The Broncos will monitor several different aspects of Lock’s and Bridgewater’s performance during the competition.

“You just want to see improvement from day to day,” Paton said. “Who’s the most consistent? Who’s the most steady? Who’s the most calm? There are so many things to evaluate in a quarterback. It’s not just one thing. We put a lot of time into it visually on the field, and when we get off the field, we study the tape as a group. Individually, we get with the coaches. We do that with every position, but quarterback is obviously heightened. We have great competition at every position and that’s what we wanted going into this offseason — competition.”

On Wednesday, that competition will begin in earnest.