ASHBURN, Va. — Coach Ron Rivera and the Washington Football Team wanted to see if Dwayne Haskins could be their quarterback of the future. After being benched on Wednesday, though, it’s clear that future probably doesn’t include Haskins.

And the first-round pick’s future in the league will be determined by his response to the move.

This is yet another test for Haskins instituted by Rivera. By dropping him to the No. 3 role, they have told Haskins, who is 3-8 in 11 career starts, that what he has done on the field hasn’t been good enough. Haskins has hit bottom; does he climb his way back? It’s the first time he has been benched (college or pros); it can make or break him. 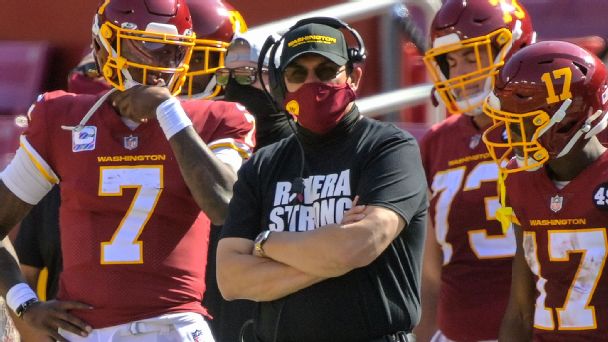 It doesn’t matter if anyone else thinks it’s the right move or Haskins deserves more than four games. Yes, it’s a quick hook. Haskins can rail about what some will see as an unjust benching, but now that Rivera and his staff have made a decision, he must respond. That said, if the coaches had truly believed he was the right guy for the job in the long-term, then this move almost assuredly isn’t made.

And unless Kyle Allen proves otherwise, the move also signals a quest by Washington in the offseason to, once more, search for its long-term answer at quarterback. Allen, once upon a time considered the No. 1 quarterback recruit in his class, has fallen on hard times in his career. He was benched during his final college season at Houston (2017) and went undrafted. But he’s only 24 and will get another chance while Haskins takes a seat.

From the moment he entered the NFL, Haskins was put in a bad situation. Washington owner Dan Snyder wanted to draft him, ignoring the advice of his football people — at least when it came to using the No. 15 overall pick on him in 2019. Instead, Haskins joined a team with a coaching staff in Jay Gruden that had to win now; he was a quarterback who had skill but lacked experience. Yet eventually Washington had to play him. It all made for a bad combination.

This offseason, Haskins attacked his game, working on his body — he has lost nearly 20 pounds from the time he was drafted — and his mechanics. He studied the Carolina Panthers offense — where Washington offensive coordinator Scott Turner had worked previously — and would throw various routes from it, before he had received the playbook. Haskins was putting more time into his craft; though he had worked a lot on his game in the past, those who worked with him said he was doing it more at an NFL level this offseason.

But Haskins was hurt because of the coronavirus pandemic, especially the loss of on-field time. There were issues coaches might have spotted long ago and either worked sooner to correct, or might have led to a different decision to open the season. Instead, over four games this season, Haskins ranked last in the NFL in total QBR at 30.6, 27th in completion percentage (61.0) and 26th in yards per pass attempt (6.43).

Still, Haskins responded favorably off the field this season. He had been more receptive and shown more maturity during interviews, having heard time and again how his body language needed to improve. It was a constant topic in 2019, but Haskins was better in this area now. But, Washington’s coaches wanted to see more growth.

Now he must show he can put up a fight.

At Ohio State, Haskins sat behind J.T. Barrett for two years because the team was winning. And he beat out Joe Burrow — the No. 1 overall pick in 2020 by the Cincinnati Bengals — for the Ohio State starting job in 2018. Former Buckeyes coach Urban Meyer said Burrow had the competitiveness he liked, owed to his playing multiple sports in high school, but needed more work on his football acumen. Haskins, he said, had the skill but needed to hone his competitiveness. Haskins showed enough to win the job and threw 50 touchdown passes to only eight interceptions and entered the NFL draft.

In an ideal situation, Haskins would have competed for the job this summer with Allen, who has been viewed as a backup. But now Haskins must compete with himself. He is liked inside the building and Rivera arrived with a plan on how to develop him. Those plans have changed.

Rivera had hoped the same blueprint he used for No. 1 overall pick Cam Newton when he was a rookie in 2011 would result in success when used on Haskins. Rivera never wavered in his belief in Newton. Rivera stuck with him through some early struggles because he and the organization liked what Newton was showing on the field and behind the scenes.

But this Washington staff didn’t pick Haskins, they inherited him. While they wanted to develop him, they certainly weren’t wedded to him, which makes it easier to move on.

Now it’s up to Haskins. If Washington found it necessary to move on from him after four games, it’s hard to imagine the team sticking with him after the 2020 season. Washington will be left with a dead salary-cap charge of $8.5 million if it moves on from Haskins after this year.

Perhaps it doesn’t reach that point. Perhaps Haskins responds and wins his job back. He’s only 23. He could still have a long NFL career. But, after Wednesday, that future in Washington clearly is in doubt.

Tags: haskins he his