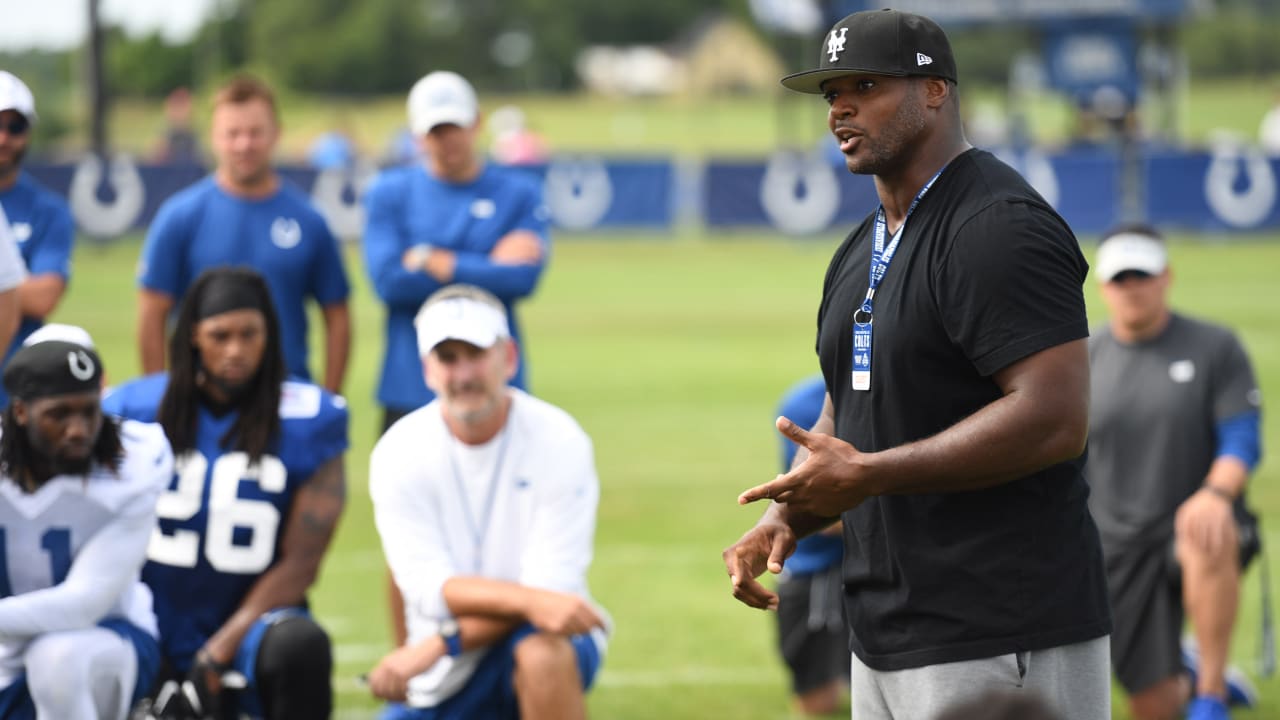 How good does it feel to be back here in Indy with the team?

Freeney: “It feels good. Honestly, it does. This is another home for me, and I have so many good memories being around. Especially now, to come back and Frank’s the head coach and he was one of the guys who was a coach before, but not in the same position. I see all the old equipment guys and actually some guys I played with. Obviously Andrew’s here and Castonzo’s still here and Adam never is going to quit. So it feels good man, to come back, back to where it all started.”

What do you try to tell them? What are you trying to impart to the players?

Freeney: “Well, I mean, it’s a little bit of everything, but it’s just understanding the process of this. And it’s a tough process. It’s a high stressful situation that these guys are in and it’s an emotional thing, and if you can control and figure out exactly what it is that you’re trying to do here … and I kind of gave them some tidbits of what helped us, back in the day, be so successful year in and year out, what helped us become that and do that. So that’s what it is. You just have to give them some nuggets, things to think about, to stimulate and somehow maybe help their journey and make their journey easy, because that’s what happened with me. It was the veteran guys, the older guys that helped me along the way. And now that I’m, I guess, the old guy now and retired guy now, so now it’s my job to do that once in a while.

Freeney: “I’m in Florida. I live in West Palm Beach. I probably play way too much golf to be quite honest with you, my swing is getting worse.”

You can’t play too much golf.

Freeney: “That’s what I thought until I got to Florida and it’s a hundred degrees and it’s like, ‘Man, training camp might be better than this.’ But in the end that’s where I’m at. I have some family out there, so … the weather is good for the most part, all year round.”

Freeney: “I’m doing some TV stuff here and there. I’ll stop in on NFL Network. I’ll stop in on ESPN or Fox or whatever and do some type of analyzation of the game, stay connected but not all the way in. Just figure it out. This is the second year that I’ll be retired, so I’m trying to figure out what the next step is and that might be it, TV stuff. May not be. May be coaching. Who knows?”

What was it like getting that call from the Colts that you’re going to be the Ring of Honor?

Freeney: “Oh yeah, that was an amazing. It’s funny, you talk to people and they say, ‘Well, of course you’re going to be in the Ring of Honor.’ But you’re not thinking that and you don’t realize it until it happens. And that was something that when I got the call, and I was of course on a golf course, I was playing, and then all of a sudden I got the call. And Pete (Ward) called me to say, ‘I just want you to know.’ And I was floored. And I guess people would be like, ‘Of course you would be.’ But you don’t think that. So when it hit me, it was like, ‘Man, I’m blessed.’ And that’s just a tremendous honor.

This could be the year that Edgerrin James gets into the Hall of Fame. Give us your assessment of him — truly deserving, right?

Freeney: “Oh, absolutely. When you think about running back, Edgerrin hits all the categories. And that is a skill that is no longer really happening now. You take a guy out now to get what Edgerrin did the whole entire time. He’s a pass protector. He knew exactly where the blitz was coming to him. He can come out of the backfield, make the catch and he’s also a tremendous runner and a leader, man. So, I understand the process is a hard process because there’s only five guys that can go. And I think he’s definitely deserving of it. Hopefully, next year is the year for him. I’m always going to be rooting for him.”

What told you that you were done with your playing career?

Freeney: “I think the big thing was, it was kind of like, I played so long. Sixteen years at the defensive end position is a long time. I sat there and thought, (and) in the end it became me changing teams a lot. And now it became, ‘Hey, Dwight. I want you to coach this guy,’ you know? I’m like ‘Wait a minute. I can still play, I can still do it.’ So once that started creeping in a little bit, and I think I could still probably be playing a couple of years, it was kind of like, ‘You know what? Let the young guys have it. Let them do it.’ I was falling into situations sometimes to where it was as though for me to play was to take time away from somebody else. And I think some of the management people were kind of conflicted with that a little bit. So I didn’t want to put these people in those positions. If you think I should play, put me out. I don’t want to be the guy who’s saying, ‘Hey, well, Dwight Freeney is here. So all of a sudden you can’t go and play because he’s here,’ when he’s deserving and wanting time. So, I just figured it was time to just see what else is out there.”

When was your last training camp? Because normally you were starting late.

Freeney: “That’s what I’m saying. Late? I was making sure. It’s like, “OK, so, August. OK, we’ve got a couple more weeks and… ” You know? But it’s a thing that I miss, I always will miss. Game day is what I will miss and I can’t replicate that. That’s unreplicable. It’s just one of those things that you’re going to miss forever.”

How’s the transition been to retirement? Because it’s tough for some guys.

Freeney: “Yeah. I mean, so far so good. I try to stay busy. Like I said, I try to stay somewhat connected to it a little bit, so I’m not just going completely dry with it. I’m just still saying, ‘OK, you know what? This is something I still love to do.’ And I’m being patient with it. I’m not making any drastic moves now to doing something different where all of a sudden I’ll have to commit to that and I can’t enjoy life. I spent a lot of time committing to football and playing every single day, practicing or revolving some type of football thought. So it’s kind of refreshing to not necessarily have to do that all the time and see what normal life would be on a Sunday morning. And I wake up, now all of a sudden I don’t have to put the pads on. I don’t have to stretch. I don’t got to do any of that. I just like, ‘OK, let me get on the couch and just sit.’ And you sit and watch anybody struggle and laugh. No, but it’s fun.”

Freeney: “I mean, yeah, I think I’m pretty good. Knock on wood. Things, as of right now, seem to be still good. I can go out there and still mess around in the gym just a little bit. Nothing crazy. And I golf a lot now, like I’ve been saying. So for me, it’s like as long as my golf swing is still good, I’m good. So that’s where I’m at right now.

You talk about wanting to get back to greatness. Considering those 12-4 years you had with the Colts, when you see this team, are they close?

Freeney: “You know, close (is) when it’s consistent and becomes more a consistent thing, OK? These guys had a remarkable year last year. Now, being in now conversation of being one of the better teams — and that’s where we like to keep our Colts, right, is in the conversation of being one of the better teams out there — things have to fall the right way. And for us it fell the right way one time. Sometimes you have to have some luck on your side. Sometimes it’s talent. All of that plays in a part of actually winning the championship. So I think this is a good step. These guys went to the playoffs when no one thought they would be. Okay? Now they can build on that and make it a more consistent thing.”

Freeney: “Yeah. It’s always going to be that. It’s always going to be that. And I told those guys that when I was there, I said, “Just because I may not be wearing the horseshoe now, those who played still feel connected.” So when they win, we win. (The) moment that you guys lose, we lose. And that’s just what it is. Because when you go out there, you put everything into it and it’s not just a fake thing. It’s a real thing. And I really feel identified with the Colts. It’s where it started for me. So regardless, I’m a Colt for life.”