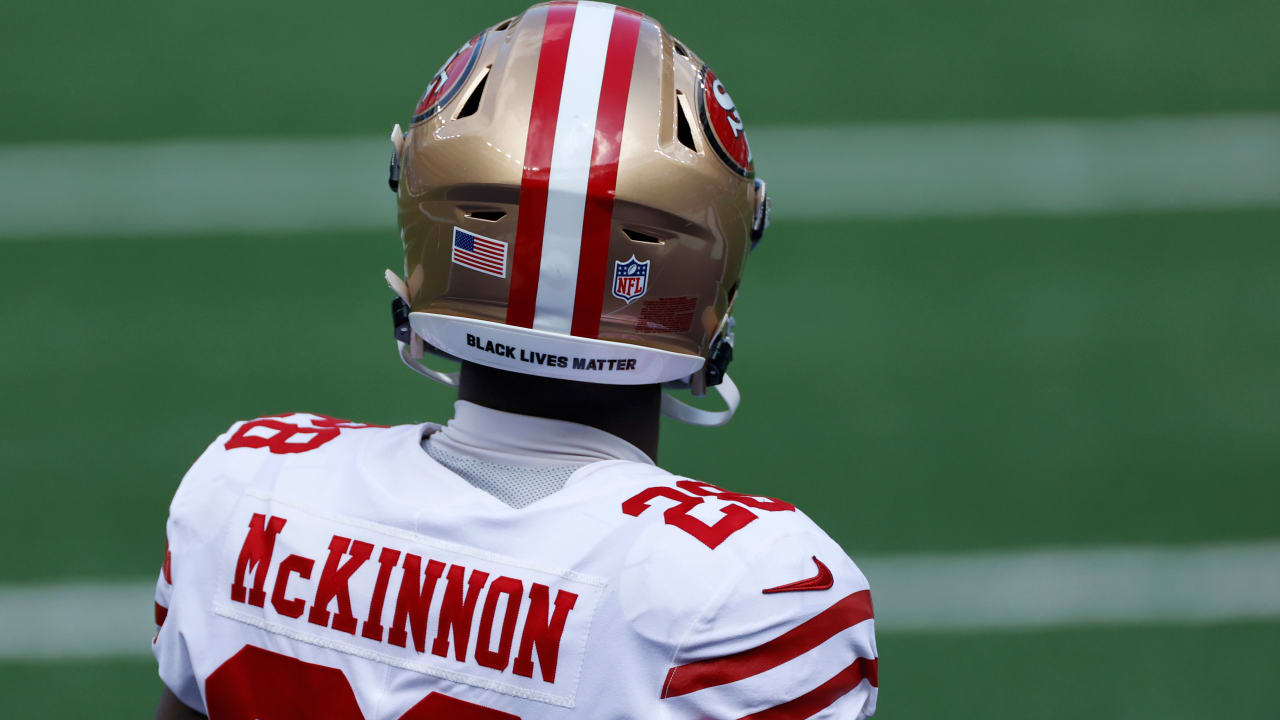 The team that was booked for a Sunday night primetime TV audience this weekend is certainly not the same that has suited up for the past couple of games.

And that makes what the 49ers did on their road trip to sweep the New Jersey teams all the more impressive.

And, now, we all will start to see the returns of some of the key members of the 49ers’ Super Bowl team, including tight end George Kittle and wide receiver Deebo Samuel﻿.

Those two dynamic players are back just in time for the national exposure that comes with playing on Sunday Night Football.

A week ago, one of the themes the 49ers repeated as they prepared to face the New York Giants was, yes, many outstanding players are out of the lineup but the roster has enough depth to withstand the injuries.

Young players who got their beginnings on the practice squad and reclamation projects have been the story of the first quarter of the 49ers season.

And, you can bet, that will be a theme of the NBC Sports broadcast that will originate under the lights at Levi’s® Stadium.

Backup quarterback extraordinaire Nick Mullens﻿, who spent all of 2017 and the first three weeks of ’18 on the practice squad, gets his second start of the season in place of hobbled Jimmy Garoppolo﻿.

And, this week, Kittle and Samuel will be on the field to provide Mullens with his top two options in the passing game.

Kittle sustained a knee injury in the first half of the 49ers’ season-opening loss to the Arizona Cardinals and has not caught a pass since.

Samuel has been running at his top speeds for a couple of weeks and will likely see a reduced workload as coach Kyle Shanahan looks to ease him back into the offense. Samuel makes his season debut upon returning from surgery in June to repair a fractured left foot.

“They’re two great playmakers on this football team and even getting on the practice field this week you’re quickly reminded about their speed,” Mullens said. “They’re so fast at every practice rep and every game rep, and we’re going to love to have their speed, physicality and mindset back on the field this week.

“I’m pumped for those guys that they’re finally healthy.”

The same could be said for such veteran players as running back Jerick McKinnon and cornerback Jason Verrett﻿.

Shanahan handpicked McKinnon for his offense on the first day of free agency in 2018. He wanted McKinnon at virtually any price. He got him.

And, finally, McKinnon has the opportunity to show 49ers fans what they missed in 2018 and ’19, when he was physically unable to play due to knee issues.

McKinnon returned to the 49ers this season on a reduced contract. But he agreed to do so only after Shanahan granted his request. McKinnon told his coach he wanted to be treated as any ordinary, healthy player. He did not want to be eased back into practices or games. He wanted a full workload, as if he were an undrafted rookie. He wanted to prove himself.

And the man everyone calls “Jet” has been full-throttle since the first day of camp.

McKinnon takes over as the starter with Raheem Mostert sidelined with a knee sprain. Through three games, McKinnon has 139 yards rushing and two touchdowns on 20 carries. He has six receptions for 59 yards and a touchdown.

On the other side of the ball there is a similar feel-good story developing with Verrett, who on Sunday night will make back-to-back starts for the first time since the 2016 season. Verrett is ultra-talented but has missed significant time throughout his career with a variety of injuries.

Verrett signed with the 49ers last year, but his knee was not right. He never had a chance to make a contribution in 2019. It seemed as if the 49ers would have been justified to simply move on.

Instead, what they saw from Verrett during the time when he was on Injured Reserve made them want to retain him even more.

“We took a shot on it last year,” Shanahan said. “It didn’t go great, but we actually got to know the guy and we were really hoping that he’d give us another shot again.

“He puts in all the work he can and it’s either meant to be or not. He’s a hell of a player, so I’m glad it’s working out for him right now.”

A year ago, the 49ers had four players selected to the Pro Bowl and eight more named as alternates. Of those 12 players, seven will not be in uniform on Sunday due to injuries, a trade and a retirement.

While many familiar names will not take the field, Shanahan and general manager John Lynch have taken the necessary steps to ensure a primetime worthy team still shows up.